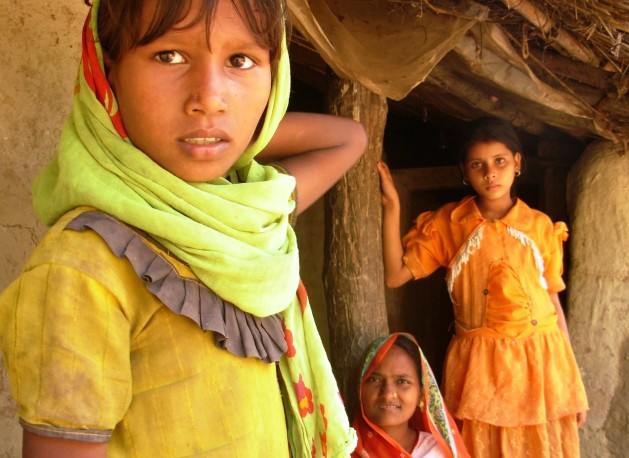 Though illegal, Nepali girls are often married off in their teens. Credit: Naresh Newar/IPS

KATHMANDU, Oct 11 2012 (IPS) - Social activists in Nepal agree that the one reason why this impoverished country will miss the gender-linked Millennium Development Goals (MDGs) of the United Nations is the persistence of child marriage.

Nepal’s marriage law stipulates 20 years as the legal age for marriage for both sexes, but current records at the ministry of health and population show at least 23 percent of  girls getting married off at 15 – 19 years.

“Early marriage should be stopped because it not only affects girls’ education but also their health,” Sumon Tuladhar, education specialist at the United Nations Children’s Fund (UNICEF), tells IPS.

“We certainly need to strongly lobby against early marriage, but we are hampered by a very poor monitoring system to implement the existing law,” Dibya Dawadi, deputy director-general in the department of education, told IPS.

But, for both the government as well as non-governmental organisations (NGOs) concerned with child marriage, enforcing the law is a dilemma because legal action means prosecuting the parents.

“Sticking a mother in jail is not helpful when she may have other young children with no one to feed and protect them,” Helen Sherpa from World Education, an international NGO, tells IPS.

Activists, however, believe that change should tackle the root of the problem – their economic situation, because daughters provide valuable help in the household and on the farms in the rural areas.

“Our biggest challenge is the family’s attitude towards educating their girls,” says Dawadi.

Many rural families marry off their daughters at the age of 11 – 13 because the older a girl gets the higher the dowry demand.

Kamala Chepang was married off at 13 because her parents could not afford to educate all their children.

“I see my young siblings going to school and this makes me happy,” Kamala told IPS in the remote Shaktikhor village of Chitwan district, 300 km southwest of the capital.

Thousands of young girls like Kamala, especially from the most marginalised communities like the Chepangs, are unable to continue their education due to poverty, social barriers and a lack of schools in the remote rural areas.

Although the trend of sending young daughters to their husbands’ home has changed and most of them stay with their mothers till they reach 16, their lives change drastically after marriage and they rarely return to school.

“After marriage, these girls rarely come back to school and even if they do, their performance is very poor,” says Tuladhar from UNICEF. “Early marriage negatively impacts their self confidence.”

According to UNICEF, 51 percent of Nepalese were married as children. Nepal’s 2006 demographic and health survey found that among Nepalese women in the 20 – 49 age group, 60 percent were married by the time they reached 18.

Nepal scores poorly on gender disparity. In 2011  Nepal stood 126th out of 135 countries in the ‘Global Gender Gap’ index of the  World Economic Forum.

“Early marriage changes a girl’s life options because parents no longer want to invest in ‘someone else’s property’,” says Kaman Singh Chepang, an activist from Nepal Chepang Association, an NGO working for the Chepang community.

Dire poverty and lack of government initiatives to get girls to school are among reasons that Chepang cites for the situation of girls in Nepal, a country where more than half of a total population of  30 million people live on less than 1.25 dollars a day.

Chepang believes that if child marriage is to be eradicated there should be close coordination among government sectors dealing with health, education, poverty and culture and also give priority to basic schooling. “But the government is unready for any such initiative.”

In the remote villages, girls may have to walk hours to reach their classrooms, and by the time they return home they are too exhausted to do their homework. In the end, they just drop out and help their parents until they are married off.

Child marriage not only denies girls an education, it often makes them vulnerable to a cycle of discrimination, domestic violence and abuse. By being made to bear children when they have barely attained puberty, they are forced to put themselves and their babies at risk, activists say.

“Child marriage is extreme denial of children’s rights. Many girls also suffer from abusive marriages as they are married to older boys,” said Sherpa from World Education.