KATHMANDU, Aug 10 2011 (IPS) - Six years ago Shantimaya Dong Tamang went to Kuwait to work as an illegal domestic worker, falling for brokers’ tales of how she could earn good money and stand on her own feet. 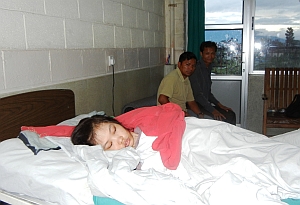 Shantimaya Dong Tamang's bid to earn money as a domestic worker in Kuwait ended with her becoming a quadriplegic. Credit: Sudeshna Sarkar/IPS

The 23-year-old returned home this month, on a stretcher. She had become paralysed from a fall within the first year of her arrival in Kuwait City.

“Officials of the Nepalese embassy in Kuwait told us she was found in a hospital, unable to speak or move,” says a dazed Tej Bahadur Tamang, Shantimaya’s father, a landless agricultural labourer from Makwanpur.

“She had fallen from the fifth floor of her employer’s house. No one knows how it happened. Did she try to escape? Was she thrown down? My daughter alone knows but she can’t speak.”

Shantimaya lies in a cocoon of blankets in Kathmandu valley’s Patan Hospital, not talking, moving or seeing anything. She has to be fed through a pipe and her diaper has to be changed regularly.

For almost five years Shantimaya lay in Kuwait’s Farwaniya Hospital till embassy officials and the network of Nepalese migrant workers managed to identify her and trace her family in Nepal.

Kani Sherpa, another Nepalese domestic worker, died under similarly mysterious circumstances. While Kani’s employer said she fell to her death from the top storey, her family alleges she was murdered after being raped.

The ensuing outcry forced the Nepalese government to ban women from going abroad to work as domestic help. However, the ban was lifted late last year after illegal migration increased and more women fell prey to the traffickers.

“Poverty and unemployment are the main factors driving women to seek work abroad even though the Maoist insurgency (that spurred migration from 1996 onwards) ended in 2006,” says Bijaya Rai Shrestha, director at Pourakhi, a non-profit organisation founded to counsel migrant workers and rescue them from trouble abroad.

“The third reason is domestic violence: abusive husbands who take a second wife or in-laws who beat and torture them,” Shrestha told IPS.

According to the department of foreign employment under the labour ministry, the fiscal year 2010-11 saw an all-time high in registered migrant workers’ exodus: 354,716 people left Nepal to work abroad, indicating a 20.61 percent surge. Of these, 10,416 were women.

This year has seen the figures growing, with over 8,000 women having left for Saudi Arabia, Kuwait, Qatar and the UAE in a surge that has made Nepal the largest recipient of remittances sent in by migrant workers.

A World Bank study on large-scale migration and remittances reported in June that Nepal received 2.5 billion US dollars as remittances in the fiscal year 2009 – 2010 overtaking Bangladesh and the Philippines, the two largest manpower-supplying countries.

Bank economist Hisanobu Shishido’s study finds the phenomenon a mixed blessing. On the credit side, it has “helped reduce poverty from 42 percent to 31 percent, bridging the gap between rich and poor, and brought better education and healthcare to migrants’ children”.

However, the dark side includes family separation, abuse, and trafficking as well as a reduction in local labour supply by almost 15 percent.

“Between 2008 and 2010, 15 Nepalese maids working in Lebanon committed suicide,” says Sthaneshwar Devkota, executive director at the state-run Foreign Employment Promotion Board. “Being mostly illiterate and unaware, they are easily duped. For instance, though they get free visas, many agencies swindle them.”

“The more dangerous ruse is making them go though India. If their documents are not in order or they are being lured to banned destinations like Lebanon, immigration authorities at Kathmandu airport will spot the fraud. So they are made to go to India first. It increases the danger of the women being forced into the flesh trade.”

Then there are the disappearances. While the labour ministry says there are nearly 30,000 to 40,000 Nepalese maids in the Gulf, Pourakhi estimates that the actual number is over 300,000. Most of them are undocumented, having no valid papers.

“Though the law says housemaids can work in a foreign country for a maximum of two years, Renu Gurung, who went to Oman, was missing for 10 years,” says Reecha Sharma Tiwari, administrative officer at Pourakhi.

“She contacted her family only about five months ago, saying she is now ‘holed up with some friends’. Tulasa Devi Lamichhane and Ranjana Pariyar were accused by their employers of theft and are doing time in Oman. With no documents, it is near impossible to rescue such workers.”

Faced with protracted political instability, Nepal finds it hard to attend to issues like migrant women workers’ safety. This summer, though, agreements were signed with the four major Gulf countries employing Nepalese maids: Saudi Arabia, Kuwait, Qatar and the UAE.

“A nine-point yardstick has been drawn up,” says Devkota. “It has fixed the minimum salary and laid down conditions like a secure separate room for the maid and allowing her to contact her family and the embassy once a week.”

Employers are also required to show sound financial status to pay the promised salary and must have no morality-related cases against them.

Perhaps the reforms should begin at home.

On the day Shantimaya was brought back to Kathmandu, Sita Dahal, also 23, was waiting at the foreign ministry’s passport counter for an emergency passport. From eastern Nepal’s tea garden district of Morang, she was going to Dubai to work in a factory.