Gorkha Bajar, NEPAL, Apr 30 2009 (IPS) - Maoist hammer and sickle graffiti from last year's constituent assembly (CA) election is still fresh on the walls all around Gorkha Bajar. This historic town, some 150 km west of the capital Kathmandu, used to be a Maoist stronghold during the 'peoples war' from 1996-2006. 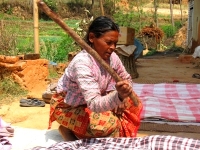 Julum Pariyar voted for the Maoists in April 2008 elections, but her life has only grown harder in the past year. Credit: Malika Aryal/IPS

Although the district has been peaceful since the ceasefire in 2006, the scars of the war still haven't healed. The locals say they will never forget how the war turned neighbors into enemies, how young boys and girls from the district joined the war and came back to threaten their families.

Dozens of familiar faces went missing or killed; the town lived in fear of crossfire between the Maoist and the Nepal Army, in battles which sometimes lasted for days.

A travelling documentary festival has just reached Gorkha. The local village meeting hall is full of students and film enthusiasts, who have travelled from afar. The selection of films in the festival cover issues relating to development, ecology and human rights. But the films from Nepal talk about the 'people's war' and the need for reconciliation.

"The war still haunts us," says local student Prajjwal Singh as he comes out of the film theatre. He believes that the war was necessary to bring change in society, but now wants to look to the future. "We have come so far since the end of war; it is now time to focus our energy on positive things."

His friends are less hopeful and more critical. "It has been a year since the elections, 601 members are in the constituent assembly, the Maoists are leading the government, yet very few things have changed in the new Nepal," says Sunita Parajuli.

She says that the people are getting restless and want to see action not hear words. "The Maoist leaders, like the leaders from the old regime, only know how to make promises and bicker for power. They don't care about development or the poor."

On a hill overlooking Gorkha Bajar stands the palace of King Prithvi Narya Shah, who united modern Nepal in 1768. Lying 18 kilometres off the Prithvi Highway between Kathmandu and the tourist destination of Pokhra, the district also holds religious importance to Nepal's Hindus, as it is home to Manakaman and Gorkhnath temples.

Families in Gorkha are mostly farmers, but since the end of war, visiting pilgrims have also brought in some revenue to the district.

Kishore Thapa runs a local radio station in Gorkha and reported on the war during the conflict years. He says that the conflict may be over but there is still a lot of fear amongst the people of Gorkha. "People are afraid to speak up because they fear the local Maoists, no one wants to be on their bad side."

Even since the ceasefire, Gorkha has not been spared from intimidation, extortion, and threats by the Maoist youth wing, Young Communist League (YCL).

"In the past they used to wear masks and kill and we didn't know who they were. Now we see them, know them as the YCL, recognise them, yet when confronted, they lie and say they didn't do it. So what has changed since the end of war?" asks Thapa.

Local journalists say they have been threatened and assaulted. Most reporters who worked during the conflict years say the situation has become worse for journalists since the end of war.

Whenever IPS asked what they would expect from the government, people in Gorkha unequivocally replied peace.

This sentiment is shared by the people of Kabhre, a district east of Kathmandu. Unlike Gorkha, where the Maoists have maintained a strong influence for years, the their first success in Kabhre was when the district overwhelmingly voted for the party in April 2008.

A year later, Julum Pariyar is one of many locals in the town of Panauti who feel that the politicians in power are too involved in internal bickering and have forgotten the promises they made to the people.

"I voted for the Maoists because I thought they would give the needs of poor people priority, but I was wrong," says Pariyar, 52, who raised her two sons alone after her husband died. In recent years, her sons supported the family as daily wage labourers.

However, inflation, rising prices and strikes in the past year have worsened the financial situation. Her sons have now left for Malaysia to work in construction and send some money home. Pariyar has had to go back to sewing mattresses for her neighbours.

Tea-shop owner Badri Sapkota also voted for the Maoists in the constituent assembly election last April. He has been carefully following the debate on federalism. He thinks that Nepal should be a federal republic, but fears it could lead to separatism if those drawing the map of the new Nepal are not careful.

"They want Nepal to be a federal republic, but even the leaders haven't done enough homework to see what federalism model works for us, if they divide the country on the basis of ethnicity or language, the state will have to deal with more than one conflict," says Sapkota.

Those who have gathered for an afternoon snack at Sapkota's tea-shop say they don't want to listen to more talk of committees to address the grievances of the people, or ambitious development plans to produce 10,000 MW of electricity when the entire country is suffering from 12 hours of power cuts a day.

"Without action, they are all empty, hollow lies," said one.

In the Kathmandu Valley, the town of Lalitpur is busy preparing the chariot of the rain god Machhindranath. Hindu and Buddhist worshippers start paying their respects early in the morning.

Binita Maharjan, a computer science student, has an internal exam to prepare for, but there's no power at home, which is why she has come down to watch the chariot being constructed. She's disillusioned and says she wants to go abroad the first chance she gets.

"There's no electricity to study, read or watch television, colleges close because the teachers are striking or the student leaders are unhappy, there's no petrol because the tankers are on strike, the prices of food have gone up because the highways are closed, there's anarchy, crime and intimidation everywhere – how much worse could it get?"

Her brother Anil Maharjan is more hopeful. He thinks that Nepalis are expecting too much in too little time. "Transitions are hard, you cannot expect miracles from the leaders, it is very un-Nepali to run away when things start getting a little difficult," he says.

However, Maharjan thinks that the Maoist-led government needs to start evaluating what it has achieved in the past year and listen to the people. "In the end, it was the people who put them there and it is the people who can bring them down, so they have to be careful not to disappoint those who trusted them."