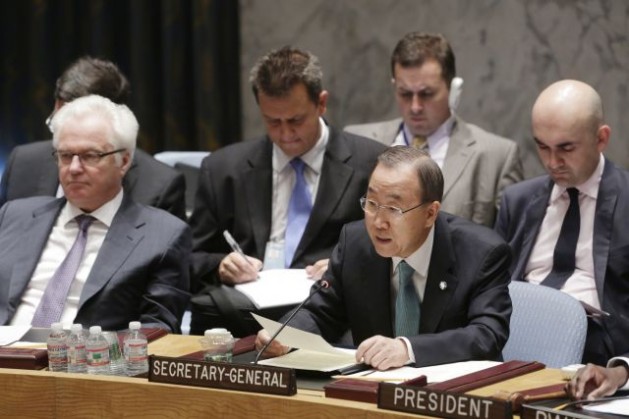 UNITED NATIONS, Jul 18 2014 (IPS) - As the civil war in Syria continues into its fourth year, the Western nations sitting on the U.N. Security Council (UNSC) have unsuccessfully tried to condemn the killings of civilians, impose punitive sanctions and accuse the Syrian government of war crimes – in four vetoed and failed resolutions.

The United States, France and Britain forced a vote on all four resolutions despite implicit threats by China and Russia, allies of beleaguered Syrian President Bashar al-Assad, to exercise their vetoes. And they did.

The question looming large over the United Nations is why China and Russia aren't initiating a new draft resolution condemning the aerial bombardments of civilians in Gaza, demanding a no-fly zone and accusing Israelis of war crimes.

All five countries are veto-wielding permanent members of the UNSC.

The vetoes drew strong condemnations from human rights groups, including a coalition of eight non-governmental organisations (NGOs) which described the last veto by Russia and China as “a shameful illustration of why voluntary restraint on the use of the veto in mass atrocity situations is essential to the Council’s ability to live up to the U.N. charter’s expectations.”

But the question now looming large over the United Nations is why China and Russia aren’t initiating a new draft resolution condemning the aerial bombardments of civilians in Gaza, demanding a no-fly zone and accusing Israelis of war crimes.

Such a resolution is certain to be vetoed by one, or all three, of the Western powers in the UNSC, as China and Russia did on the resolutions against Syria. But this time around, it will be the Western powers on the defensive, trying to protect the interests of a country accused of civilian killings and war crimes.

Still, an Asian diplomat told IPS that even if a draft resolution is doomed to be shot down during closed-door informals for lack of nine votes, an attempt could have been made to expose the mood of the UNSC  – just as Western nations keep piling up resolutions against Syria even when they are conscious of the fact they will be vetoed by Russia and China, embarrassing both countries.

Though both involve serious violations of international humanitarian law, precedent would dictate that U.N. action on Israel’s assault on Gaza would be even more appropriate because it is an international conflict rather than a civil war, said Zunes, who has written extensively on the politics of the Security Council.

“What is hard to explain is why the Security Council has not been willing to force the United States to take the embarrassing step of actually vetoing the measure, as it has on four occasions with Russia and China in regard to Syria,” he asked.

Ian Williams, a longstanding U.N. correspondent and senior analyst at Foreign Policy in Focus, told IPS the UNSC is determined to prove that governments do not have principles, only interests.

Since the end of the Cold War, the Palestinians have had no sponsors or patrons.

He said even the Russians and the Chinese weigh the strength of the Israel Lobby in the U.S., and increasingly in Europe, and calculate whether it is in their interests to alienate Washington even more.

Since they see few tangible diplomatic, economic or political benefits from backing the Palestinians, let alone Hamas, they allow atrocities to go unchecked in Gaza while raising their hands in horror about lesser, and less calculated, crimes elsewhere, said Williams.

“And the Russians would have to explain why they defend Assad for similar behaviour against his own people,” he added.

Only popular indignation will force the hand of governments – and the French government knows that, which is why they have banned pro-Palestinian demonstrations, he noted.

Addressing an emergency meeting of the UNSC Friday, Dr Riyad Mansour, the permanent observer of the State of Palestine, told delegates the 10-day death toll from heavy F-16 air strikes has been estimated at 274, mostly civilians, including 24 women and 62 children, and over 2,076 wounded and more thatn 38,000 displaced.

These are figures, he said, that could be corroborated by U.N. agencies on the ground.

But as of Friday, there were no indications of a hard-hitting resolution focusing on the plight of the 1.7 million residents under heavy fire and who are being defended by the militant group Hamas, accused of firing hundreds of rockets into Israel, with just one Israeli casualty.

Vijay Prashad, George and Martha Kellner Chair of South Asian History and Professor of International Studies at Trinity College, told IPS that a declaration – adopted at a summit meeting of leaders of Brazil, Russia, India, China and South Africa (BRICS) in Brazil last week – mentions Palestine and Israel in terms of the Middle East peace process, but it does not take a direct position on the ongoing war on Gaza.

He added that it also says something about the lack of confidence by the BRICS members on the Security Council who felt betrayed by Resolution 1973 (on Libya) and did not draft a resolution to call for a No Fly Zone over Gaza based on the principles of Responsibility to Protect (R2P).

The West has drafted resolutions on Syria, knowing that Russia and China would veto them as a way to deliberately put their rivals in a poor light, he added.

He asked why the BRICS states on the Security Council (currently Russia and China) did not produce a resolution to show the world that the West (or at least the U.S.) is willing to allow the calculated slaughter of the Palestinians at the same time as they want to be the ones to arbiter who is a civilian and what it means to responsibly protect them.

This only shows the BRICS states are not willing to directly challenge the West not in a defensive way (by vetoing a Western resolution), but in an aggressive way (by making the West veto a resolution for ending the slaughter in Gaza), he added.

Brazil, the current chair of BRICS, said in a statement released Friday the Brazilian government rejects the current Israeli ground incursion into Gaza, which represents a serious setback to peace efforts.

“Such an offensive could have serious repercussions for the increased instability in the Middle East and exacerbate the already dramatic humanitarian situation in the Occupied Palestinian Territory,” the statement said.

“We urge the Israeli forces to strictly respect their obligations under the International Humanitarian Law. Furthermore, we consider it necessary that Israel put an end to the blockade on Gaza immediately.”