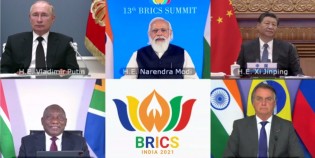 By Mario Osava
The growing vitality of the group of countries made up of Brazil, Russia, India, China and South Africa (BRICS), which is beginning to formalise its institutions even as it tries to bridge very disparate realities, seems to be partly cemented by increasing links between its companies.

By Carey L. Biron
The Group of 20 (G20) industrialised and emerging economies on Sunday formally expressed frustration with the ongoing inability of the United States to approve a major reform package that would see governance at the International Monetary Fund (IMF) shift more towards developing countries.
Next Page »

BRICS is the acronym for a group of five leading emerging economies, namely: Brazil, Russia, India, China, and South Africa, which joined the association (then called BRIC) in 2010. Each of the member states is a major player in the global economy, though all are classified as developing or ‘newly industrialised’ countries. As G-20 members, the BRICS have large, rapidly growing economies, with the ability to shape regional and global trade. Together, these nations represent some three billion people and have a combined gross domestic product (GDP) of over 16 trillion dollars, in addition to roughly four trillion dollars’ worth of foreign reserves. Early this year, they counted for 18 percent of the global economy. South Africa hosted the 2013 BRICS summit in Durban, which marked the association’s fifth global session. The 2014 gathering took place in Fortaleza, Brazil, during which member states discussed, among others, the possible admittance of Argentina as the sixth member. The southwestern Russian city of Ufa will play host to the 2015 summit.