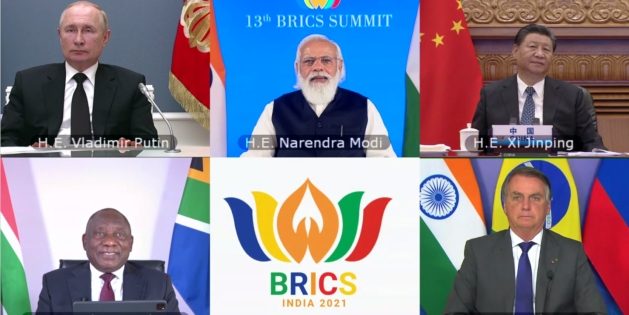 Leaders from BRICS nations participate in the 13th annual summit despite diplomatic tensions within the group (image: Alamy)

RIO DE JANEIRO, Sep 22 2021 (IPS) - Amid scepticism and a lack of public interest, domestic crises and the backdrop of Covid-19, last week the BRICS countries delivered on their commitment to hold an annual summit without showing the signs of disunity that has beset the group in recent years.

So what still holds the bloc of so-called emerging nations together?

In a virtual event, the heads of state of host country India, Brazil, Russia, China and South Africa renewed the group’s pledge of cooperation for the thirteenth time, in an event that passed without incident, unlike the barbs of last year. It also failed to attract much public interest.

Internet searches for BRICS-related news during the summit fell to one of their lowest points levels in the group’s history, according to Google Trends. Online searches usually peak in popularity during the event but have rarely sparked as much interest as the 2014 summit, when the bloc launched the New Development Bank (NDB).

Today, not even one of the BRICS’ most enthusiastic supporters, the economist Jim O'Neill, who coined the group’s acronym two decades ago, seems impressed with the latest developments

Scepticism towards the progress of the bloc pervades. It launched in 2009 with industrialised nations in the grip of the financial crisis with great – perhaps too great – expectations over its potential to redefine global governance. Today, not even one of the BRICS’ most enthusiastic supporters, the economist Jim O’Neill, who coined the group’s acronym two decades ago, seems impressed with the latest developments.

“The bloc’s ongoing failure to develop substantive policies through its annual summitry has become increasingly glaring,” O’Neill wrote after the event.

O’Neill’s frustration derives from what he recalls the “roaring success” of the four founding BRICS nations first decade. South Africa joined the group in 2010.

In 2009, Russia hosted the first summit, seeking a more active voice on global economic affairs in response to the devastating financial crisis.

In its early years, “countries pushed for reforms of the International Monetary Fund and the World Bank and offered an alternative to the international financial order by creating the NDB,” said Karin Costa Vazquez, of the Center for BRICS Studies at Fudan University.

At that time, and excluding Russia, countries formed the BASIC group, offering an alternative voice in international climate negotiations after the “failure of developed countries to define a climate agenda” and the collapse [of COP15] in Copenhagen”, said Izabella Teixeira, who was Brazil’s environment minister from 2010 to 2016.

“The BRICS were an environment of important political dialogue,” Teixeira told Diálogo Chino. “It was a super interesting moment of confidence building. There was an informality in the conversation among the ministers.” The group’s diplomatic role, Teixeira added, “was absolutely important” in the negotiations that would later culminate in the 2015 Paris Agreement.

From then on, however, experts chart the emptying of the BRICS as a group, as economic and political crises burdened member countries. It witnessed recession in Russia, South Africa and Brazil, tensions between China and India and the belligerent anti-China rhetoric of Jair Bolsonaro, who became president in 2018 and began to deconstruct environmental policies and isolate himself diplomatically.

“The country has gone against the world,” Teixeira said.

Although the heyday may be behind it, BRICS is still relevant today, according to Costa Vazquez. “The BRICS is the only space that the largest emerging economies in the world have to coordinate positions and propose initiatives of common interest to the five members. This is no small thing when we are talking about more than 30% of world GDP,” she said.

Vazquez argues that in order to keep functioning, the multilateralism of the bloc has given way to more bilateral agreements. As such, it is more flexible, limiting cooperation when interests diverge and resuming and expanding it when they converge.

Since BRICS doesn’t function as an economic bloc, it does not have a formal statute of rules that dictate its behaviour. The cost of membership is low, and the diplomatic benefits are still significant, according to Oliver Stuenkel, from the Getulio Vargas Foundation.

Stronger diplomatic relations can also reflect booming bilateral trade. For example, trade between Brazil and China should hit a new record in 2021. Last year, bilateral trade topped US$100 billion for the first time and as of last month, it had already surpassed US$93 billion.

Unsurprisingly, Bolsonaro adopted a milder tone on China at the recent BRICS summit. Meanwhile, China’s President Xi Jinping said that, regardless of the difficulties, the BRICS will maintain solid and constant cooperation.

Despite few new articulations on historic areas of cooperation such as climate, the main product of the BRICS, the NDB, is gaining momentum. Paulo Nogueira Batista Júnior, and economist who was vice-president of the bank between 2015 and 2017, criticised the slowness of the NDB to produce results and fulfil its aspirations of becoming a global development bank.

Today, however, Batista Junior sees advances. “In the last two years, the bank seems to have moved a little more and achieved some results,” he said. “For example, it has approved projects, including support programs to combat Covid-19, continues to hire employees, built its headquarters, developed technically and opened the process of inaugurating new members.”

In early September, the NDB announced the addition of Uruguay, the United Arab Emirates and Bangladesh to its membership. In its six years of operation, the bank has approved some 80 projects, with investments totalling US$30 billion. The bank has also made US$10 billion available to BRICS member countries to combat Covid-19.

“The bank is already part of the landscape,” said Batista Junior. Can the same still be said of the BRICS bloc?