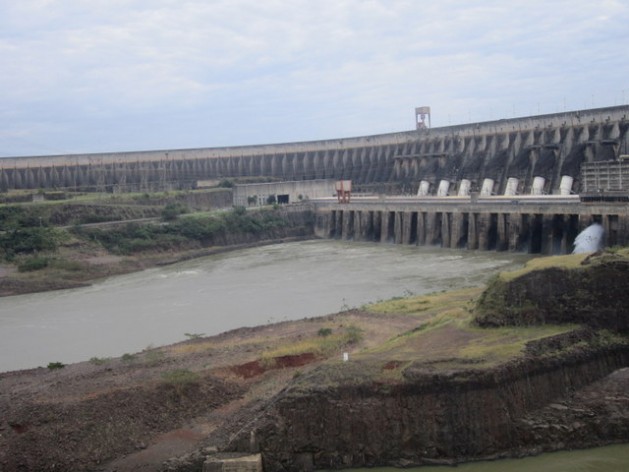 Mega-projects like the Itaipú hydropower station shared by Brazil and Paraguay could in future be financed by the new fund and new bank to be launched by BRICS leaders in the Brazilian city of Fortaleza. Credit: Mario Osava/IPS

FORTALEZA, Brazil, Jul 12 2014 (IPS) - The first common institutions to be set up by Brazil, Russia, India, China and South Africa – the BRICS – are financial, and have arisen as a result of reforms to an international system that continues to largely ignore the growing influence of emerging countries.

But the Contingency Reserve Arrangement (CRA), the BRICS countries’ monetary fund, will also be unbalanced in the composition of its resources, leading to the possible reproduction of these inequalities.

The cement that binds the BRICS together is their aspiration to wield more power in international economic bodies.

The CRA and a development bank will be formally established at the Sixth BRICS Summit, to be held in Brazil on Tuesday Jul. 15 in the northeastern city of Fortaleza and on Wednesday Jul. 16 in Brasilia. On Monday, preparatory meetings will take place between ministers, members of the business community and the group’s central banks.

The reserve fund will have 100 billion dollars to come to the rescue of any of its members suffering an exchange crisis. China would contribute 41 percent of the total, South Africa – the smallest partner – five percent, and the other countries 18 percent each.

These percentages reflect the size of each country’s economy. However, participation in the New Development Bank (NDB), the other instrument that will be established at the summit, will be on the basis of equal shares: 10 billion dollars each and equal voting rights for each member.

This is the big difference between the NDB and the World Bank, of which it is a reflection. “The NDB is democratic,” Christopher Wood, a researcher for the South African Institute of International Affairs in Johannesburg, told IPS.

This aspect of the NDB is also very different from the CRA, where China, as the largest country, “will probably have a disproportionate influence,” but it is hoped that the design of the institution will prevent it from being overly one-sided, Wood said.

Negotiations have been under way to create the development bank and the monetary mechanism since 2012, and now only a legal review is required before they are signed by the five BRICS leaders in Fortaleza, announced José Alfredo Graça Lima, the undersecretary- general for political affairs at the Brazilian foreign ministry.

BRIC, an acronym coined in 2001 by U.S. economist Jim O’Neill for the four emerging powers that are changing the shape of the world, began to hold meetings of heads of state and government in 2009, forming “a coalition” that was joined by South Africa in 2011.

“It is not a bloc” that adopts common policies for trade and other sectors, Brazilian diplomats said in response to critical observations about the discrepancies between the countries in different economic or political international forums.

The huge countries, or “whale-economies,” are getting to know each other and have expanded their dialogue. They have “a positive role in democratising international relations,” Graça Lima said.

Cooperation between the five countries is already ongoing in more than 30 areas, and their societies are also interacting through business and academic forums and other means, said Flavio Damico, the head of the Brazilian foreign ministry’s department of inter-regional mechanisms.

But the cement that binds the BRICS together is their aspiration to wield more power in international economic bodies. “The structure of power and privileges” of the global financial and political system “has remained set in stone” since 1945, and will have to change “to adjust to present reality,” he said.

The blocking of a proposed reform of the International Monetary Fund (IMF) in the U.S. Congress spurred the BRICS countries to make headway with their own solutions. The CRA will probably “not substantially change the world economic order in the short term, but it certainly could erode the centrality of the IMF in the long run,” said Wood.

The CRA is being formed in the context of persistent after-effects of the 2008 financial crisis and the “systemic imbalances in the global economy, perpetuated by the monetary policies of advanced economies, such as the United States and the European Union,” Vivan Sharan, an expert on BRICS with the Observer Research Foundation in India, told IPS.

With the “monetary safety net,” BRICS will be signalling “lesser levels of dependence on Bretton Woods institutions such as the IMF, which urgently requires structural and governance reform,” he said. But the group is not aiming at “a recalibration of the global economic order,” he said.

Brazilian economist Fernando Cardim, professor emeritus of economics at the Federal University of Rio de Janeiro, doubts the CRA will be successful. Its resources will be too few, as its entire funds would not even be able to protect Brazil alone from mass capital flight, he argued.

Moreover, it will not necessarily prevent potential intra-BRICS strife, as China will have decisive powers “similar to or even greater than those of the United States over the IMF,” and is likely to wield power with less subtlety, he said.

But the BRICS institutions are not seeking to substitute for or confront the IMF or the World Bank. The CRA’s goal is to “complement” them, as “an additional line of defence” for the five countries, which are not facing balance of payment difficulties, according to Graça Lima.

The IMF’s resources total 937 billion dollars, more than nine times the value of CRA funds, and it will continue to play a key role for the CRA itself and other monetary mechanisms created to combat financial crises, Wood said.

In the Chiang Mai Initiative, a similar mechanism adopted by the Association of Southeast Asian Nations after the region’s 1997-1998 crisis, and which is backed by China, South Korea and Japan, countries must first request IMF assistance if they wish to draw a large loan from the funding pool, said Wood.

The NDB, already known as the BRICS Development Bank, is less controversial, although it has drawn criticism from social and environmental activists. The plan is for it to begin financing infrastructure and sustainable development projects in two years’ time, after obtaining parliamentary approval from member countries.

Its starting capital of 50 billion dollars is limited in comparison with the needs of BRICS members and other developing countries that could benefit from loans and even join the bank. It is less than the amount loaned annually by Brazil’s National Bank for Economic and Social Development (BNDES).

The Indian government, for instance, estimates that one trillion dollars are needed for financing domestic infrastructure projects over the next five years, around half of which is to come from the private sector.

However, new sources of funding are important because Indian infrastructure projects are facing serious liquidity challenges, as they are over-dependent on banking sector finance due to “the non-existence of a robust corporate bond market,” said Sharan in New Delhi.

“South Africa has a lot to gain,” as the NDB will focus on large infrastructure projects, a common problem amongst all the BRICS, and can offer long-term financing which is often difficult to obtain, particularly from the private sector, Wood said.It will also support project preparation, like surveying work, which often needs to be done before financing for the project can be accessed.

The NDB is authorised to double its funds, but its key importance is that co-financing projects acts as a catalyst, by reducing the risk and cost burden for other lenders and so attracting resources from private investors and national and multilateral development banks around the world, according to Wood and the Brazilian diplomats.

With additional reporting from Ranjit Devraj in New Delhi and Brendon Bosworth in Johannesburg.