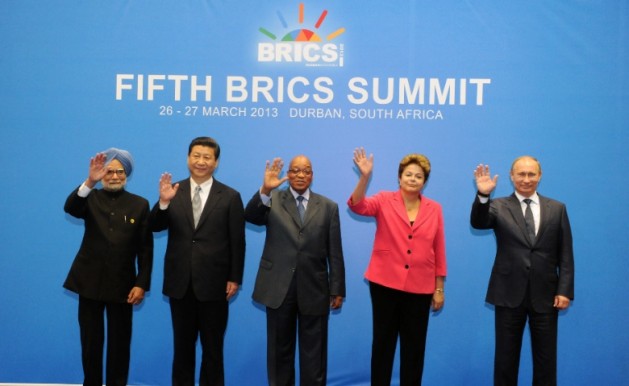 BUENOS AIRES, Jun 18 2014 (IPS) - As Argentina starts to mend fences with the international financial markets, the emerging powers that make up the BRICS bloc invited it to their next summit. This could be a step towards this country’s reinsertion in the global map, after its ostracism from the credit markets since the late 2001 debt default.

For now, there is no letter “A” in the BRICS acronym, which stands for Brazil, Russia, India, China and South Africa. But in Buenos Aires speculation is rife about whether it should be called BRICSA, ABRICS or BRICAS, if Argentina is admitted.

The invitation for President Cristina Fernández to participate in the group’s sixth summit, scheduled for Jul. 15 in the northeast Brazilian city of Fortaleza, is seen as another sign that Latin America’s third-largest economy may be incorporated, after India, Brazil and South Africa indicated their interest.

“This is very significant for Argentina,” Fernanda Vallejos, an economist at the University of Buenos Aires (UBA), told IPS.

“It not only points to the recognition by the rest of the members of Argentina’s importance and potential, but also opens a door for our country to gain greater political and economic clout on the international stage.”

Vallejos stressed the key role played by BRICS over the last decade in the growth of the global economy at a time of financial crisis in the industrialised North.

The term BRICS was coined for the world’s major emerging markets in 2001 by economist Jim O’Neill of investment bank Goldman Sachs. Together, these countries represent around one-quarter of global GDP, 43 percent of the planet’s population, and 20 percent of global investment.

Vallejos said that in a world where blocs are playing a bigger and bigger role, BRICS has a growing voice in international forums, where the members are “demanding participation in accordance with the weight of their economies.”

“The proposal set forth by India – with which bilateral trade expanded 30 percent in 2013 – and backed by Brazil and South Africa also puts paid to the opposition’s tired complaint about our country supposedly being isolated from the world,” said Vallejos, who is also a researcher at the Energy, Technology and Infrastructure Observatory for Development (OETEC).

The formal invitation to Fernández was issued by Russia, which also thus confirmed its support.

“I think this shows that Argentina is fully inserted in international relations, not ‘isolated from the world’,” Nicolás Tereschuk, a political scientist at UBA, told IPS. “It simply doesn’t toe the line with the policies of the central countries at just any cost or in any circumstances, as it used to do at other times in its history.”

Argentina’s invitation from BRICS came almost simultaneously with the May 28 announcement of an agreement reached by the Fernández administration and the Paris Club, which this country owed 9.7 billion dollars since the default 13 years ago.

Some political sectors here see the public debt contracted by the 1976-1983 military dictatorship as illegitimate. But the centre-left Fernández administration hopes the agreement with the Paris Club will facilitate the renewed flow of international credit and investment.

Economist Diego Coatz said the agreement and other measures adopted by the government such as “improving” its economic data, whose reliability was questioned by the International Monetary Fund (IMF), point to a “shift” by the authorities aimed at “reintegration in the world in financial terms…and at positioning the country better on the international front.”

Coatz, with the research centre of the Argentine Industrial Union – the country’s leading industrial employer federation – said that if Argentina is admitted to the BRICS bloc, “it will once more be seen as an emerging developing country with great potential.”

In addition, incorporation in the bloc would open a new window for external financing, when Argentina is in need of foreign exchange and investment, he said.

At the Fortaleza summit a formal decision could be reached on creating a regional development bank as an alternative to international financial institutions like the IMF, World Bank or Interamerican Development Bank.

The new bank would have a 50 billion dollar fund for financing infrastructure in the bloc’s member countries. It would also establish a joint foreign exchange reserves pool of 100 billion dollars, “which would serve as insurance against the volatility of the markets,” Vallejos said.

“Argentina could access financing at very beneficial rates compared to the heavy interest rates of other international institutions” in order to finance infrastructure for development, she underscored.

“The strengthening of international trade by the possible admission to BRICS means important possibilities for Argentina to make significant progress towards a more developed industrial sector, with insertion in global production chains, the development of strategic sectors and the industrialisation of the countryside,” Vallejos said.

The interest would appear to be mutual.

“The invitation came after the turmoil in emerging markets early this year, after which the ‘establishment’ international financial press talked about a ‘decline’ of BRICS,” Tereschuk said.

In addition, “growth in China is slowing down, India is at a decisive moment, with the dilemma of faster growth or stagnation, and the Brazilian economy is not really flourishing at this time,” the economist said.

So for them and the rest of the members of the bloc, “joining together with a periphery country that makes up the G20 [Group of 20] would seem to be a decision of interest to the BRICS countries,” he said.

The G20 block of leading industrialised and emerging economies “is in somewhat of a crisis itself, because of the crisis that the central countries are still immersed in.”

For that reason, according to Tereschuk, Argentina would be useful to the BRICS so that the voice of their two South American leaders, Argentina and Brazil, “would be heard in unison in the greatest number of places possible.”

The political scientist said Brazil and Argentina have led a “shift to the left with growth, reduction of poverty and inequality in a framework of democracy and greater political, civilian and social rights for their citizens.

“The other members of BRICS cannot offer all of these characteristics combined,” he said.

Vallejos, for her part, stressed Argentina’s role as a supplier of raw materials. “We are an agricultural powerhouse,” she pointed out.

In addition, “Argentina has the world’s second-largest reserves of lithium, one of the biggest reserves of gold – nearly 10,000 tonnes – 500 million tonnes of copper, and 300,000 tonnes of silver, while we are becoming the third-largest global exporter of potassium,” she said.
“We are sitting on the world’s third- largest platform of unconventional fossil fuels. And to that you have to add our technological development, and the development of nuclear energy for peaceful purposes,” she added.
So would it be “BRICAS”, “ABRICS” or “BRICSA”? At any rate, what is at stake is a bit more than deciding on a new acronym.