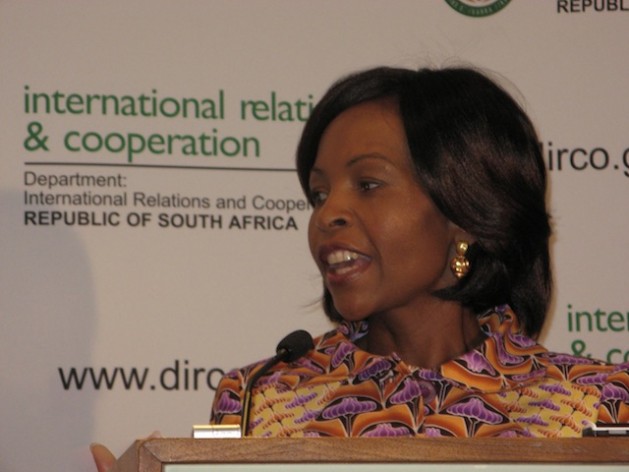 Maite Nkoana-Mashabane, South Africa’s Minister of International Relations and Cooperation has praised the Chinese for their decisive role in gaining South Africa membership to the BRICS club. Credit: John Fraser/IPS

South Africa is planning to improve business dynamics within the Brazil, Russia, India, China and South Africa (BRICS) club of emerging national economies, and also with other African nations, at the BRICS’ first African summit in Durban next month.

“The Chinese economy is already the second largest in the world, with a nominal GDP above seven trillion dollars, (and) growing at between seven and eight percent,” he said. “There are also several emerging market economies that have GDP levels above one trillion dollars, including Brazil, Russia, India and Mexico.”

He added, “The outlook for advanced economies, in contrast, is mediocre, given that they are largely encumbered by high debt burdens.”

Jordaan said that there are opportunities at the summit for promoting some of the innovative banking products that South Africa has developed.

“For example, mobile cash and banking facilities, such as cell phone banking, have great potential in Africa and other developing countries – as this technology is most applicable in emerging markets,” he explained.

Preparations for the summit are accelerating: Russian Foreign Minister Sergey Lavrov travelled to Pretoria earlier this week and met with Maite Nkoana-Mashabane, South Africa’s Minister of International Relations and Cooperation.

The two agreed that there are a number of important global issues in which the BRICS should co-operate, such as pushing for reforms in the United Nations, the International Monetary Fund and other global institutions.

Their Chinese counterpart, Foreign Minister Yang Jiechi, is slated to make a pre-summit trip to South Africa next week.

Nkoana-Mashabane has praised the Chinese for their decisive role in gaining South Africa membership to the BRICS club.

“I do believe that China’s key role in securing South Africa’s membership of the BRICS was the correct initiative to create a nexus between Africa and the BRICS,” she said.

“South Africa is deeply grateful for the role that China has played in this regard,” she added.

When they attend the Durban summit, each of the BRICS leaders will be accompanied by a sizeable business delegation – and a lot of work is taking place behind the scenes to ensure that there will be productive business dialogues.

A big challenge for South African President Jacob Zuma and the other leaders will be to make it easier for business leaders, like Jordaan, to further shift their focus toward working with emerging nations.

Trade ministers from the five-nation club will hold a special joint session with business delegations from the member nations on the eve of the summit, and a permanent BRICS Business Council is due to launch after the summit.

“This business council will be a more permanent mechanism for business interaction,” Xavier Carim, deputy director general at the South African Department of Trade and Industry, told IPS.

But there has been concern in South Africa that many members of business delegations, who have in the past accompanied Zuma to BRICS gatherings, have been chosen because they are his close supporters, and not necessarily because their presence would help forge new business links.

Business events staged on the fringes of past BRICS summits have not always been well prepared.

“I hope we can organise it well, to allow proper networking with a digital database of who is there, and then it could be very worthwhile,” he told IPS.

Jordaan said his bank and its parent Rand Merchant Bank (RMB) are already involved in India and China, but South Africa’s membership to the BRICS may help to strengthen these links. He welcomed efforts to give the BRICS a business backbone.

“We do believe that South Africa’s membership is important and will benefit our growing operations in these countries,” he said. “We support our government’s initiatives to create new avenues for growth via BRICS-related partnerships.”

However, Jordaan emphasised that while the BRICS relationship is important, Africa will remain his main external growth priority.

“We are strongly focused on growth opportunities across Africa as a primary strategy for the expansion of our banking services,” he stated.

Van der Wath suggested that China’s activities in Africa would be happening anyway – with or without the BRICS.

“China has certain objectives in global markets in terms of investment, trade and alliances – and the investments I have seen so far in Africa are not BRICS-related,” Van der Wath said.

“However, BRICS is helpful in networking, in government-to-government linkages,” he added.

According to experts, the Durban summit will be judged on its success in strengthening ties between the BRICS club and Africa.

However, the politicians will not be able to fully capitalise on these closer political ties unless they can also add a practical dimension to the relationship, by bringing BRICS business on board – something the South African hosts are working hard to achieve.