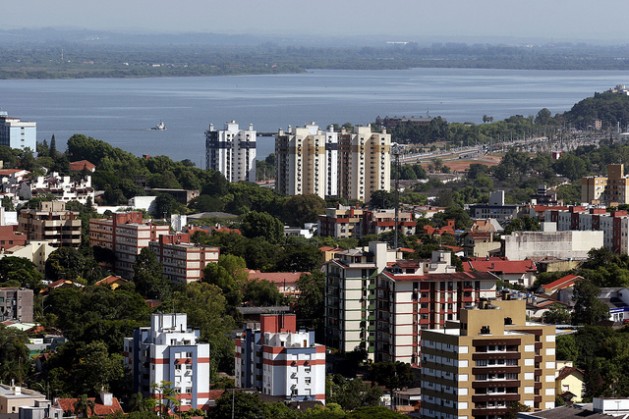 The vista of Porto Alegre in Brazil. Indonesia and Turkey may be asked to join BRICS, the alliance of leading emerging nations. Credit: Alejandro Arigon/IPS

One expert on emerging markets believes this will happen, with the BRICS nations – Brazil, Russia, India, China and South Africa – extending invitations to Indonesia and Turkey to join the club, as it expands its footprint into new regions.

“I was in Moscow recently and there was talk of the BRICS expanding to the BRICSIT, with the new members being Indonesia and Turkey,” Martyn Davies, the chief executive officer of Johannesburg-based emerging markets consultancy Frontier Advisory, a leading research, strategy and capital advisory firm that specialises in emerging markets, told IPS.

“There are sound geo-political and geo-economic reasons for this.”

He outlined why Turkey and Indonesia would be best placed to be at the front of the queue of potential new members, by explaining that an Indonesian addition to the BRICS alliance would extend the club’s reach to Southeast Asia, while Turkey would also add geographical diversification.

“There would be no regional conflict with the current membership, as Russia is the only current BRICS member which straddles more than one region (Europe and Asia),” he suggested.

And he noted that the BRICS group is an alliance which has no elaborate secretariat or infrastructure.

This would mean new members could be speedily admitted – as South Africa was in 2010 – by a consensus among existing BRICS members, rather than by time-consuming negotiations.

“There is no prescriptive process; it is easy to do this,” said Davies.

This would be in strong contrast, say, to admitting a new member to the European Union, where candidates have to sign up to a raft of existing legislation, and need to win the formal approval of the European Parliament and of national assemblies.

Analyst Chris Gilmour of ABSA Investments, the investment and wealth arm of one of South Africa’s largest banks, told IPS that the current South African government has made relations with other emerging nations a priority.

“I see the BRICS becoming a central plank of South Africa’s foreign policy,” he stated.

“South Africa in isolation is too small and insignificant to make an impact globally, but allied to countries with similar interests it can make an impact.”

However, he cautioned that there are still questions about South Africa’s credibility as a BRICS member.

“One danger I see is South Africa’s ability to remain in BRICS, as it is a bit of an impostor – a developed economy with high unemployment,” Gilmour argued.

“Our growth rate compared to other BRICS countries is very low, it’s utterly derisory. So we have a long way to go to justify our inclusion in this grouping,” he said. South Africa’s GDP growth is expected to be below three percent for 2012.

Davies argued that there has been a “dramatic shift, real or perceived” in South Africa’s foreign policy in favour of closer ties with emerging nations, since Jacob Zuma took over as president from his predecessor Thabo Mbeki.

“Mbeki was very foreign policy-focused as head of state,” he said. “He was always very comfortable in Washington DC, or London or Paris or Tokyo, but less so in the developing world.

“Africa and the developing world were relatively neglected.”

In contrast, Davies observed that Zuma is “much more comfortable” among colleagues from emerging and developing nations.

He suggested that there is a more comfortable ideological fit for this since the most recent global economic crisis, which has hit the credibility of free markets and made it more natural for South Africa to align itself with China and Russia.

“The BRICS are the first tier of emerging markets, and represent the new global reality,” Davies stated.

South Africa is to host the next BRICS summit in Durban in March 2013, and Zuma is expected to use the occasion to dispel any doubts about his country’s place in the grouping.

There may also be some progress at the summit on the existing economic initiatives which have been launched by the BRICS.

The most elaborate of these is the concept of a BRICS bank, which could involve a pooling of foreign reserves to support a fund for the BRICS nations themselves and for other developing nations.

Davies suggested this could act as a “counterweight to the International Monetary Fund.”

The summit would also be likely to review progress on the cross-listing of stock market indices among the BRICS nations.

Additionally, there is the prospect of progress on a currency swap initiative.

This is a Chinese idea and could mean that trade between BRICS members would take place without using dollars or euros, funded instead by the currencies of the BRICS bloc.

Or the BRICSIT bloc, should Indonesia and Turkey be admitted any time soon.