GENEVA, Apr 2 2012 (IPS) - Trade ministers of the BRICS countries – Brazil, Russia, China, India and South Africa – say that at the G20 trade ministerial summit later this month in Mexico they will try to ensure that attempts by industrialised countries to frame a new trade agenda do not drown development-led trade liberalisation and the World Trade Organization talks. 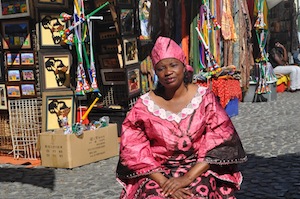 The G20 is not representative of the WTO because the poorest countries have no say in setting the trade agenda. Credit: Kim Cloete/IPS

“We will all attend the Cancun meeting to ensure that any agreement to hasten progress in further trade liberalisation is informed by the Doha Agenda,” South Africa’s Minister of Trade Rob Davies told IPS.

The Doha Development Agenda (DDA) was launched by the WTO almost 11 years ago to correct the historical imbalances and asymmetries in the global trading system. It was designed to enable poorer countries to integrate into the system.

“This is a most dangerous move by the industrialised countries which are determined to undermine the independence and multilateral character of the WTO, where a large majority of countries are asking for developmental flexibilities for implementing liberal trade commitments,” said a trade envoy, referring to the agenda for the meeting.

“The G20 is not representative of the WTO because the poorest countries and countries in Africa, except for South Africa, have no say in setting the trade agenda,” the envoy said.

Clearly, the rich countries have overwhelming influence in setting the agenda at the G20 meetings, the envoy said.

“The draft agenda for the meeting is basically asking trade ministers to agree on creating a super-body headed by the chiefs of the WTO and OECD (Organization for Economic Cooperation and Development) to oversee all the review and monitoring functions,” the envoy argued.

During their meeting in New Delhi last week, the BRICS ministers discussed the draft G20 agenda issued by Mexico, and not yet made publicly available, the South African trade minister said.

Significantly, the draft agenda is silent on the Doha trade talks.

It aims to take decisions on core trade issues without first discussing them at the WTO, which is now grappling with new approaches to accelerate the DDA talks.

“We strongly believe that the process has to be multilateral and the central focus has to be on the Doha single undertaking,” said Davies, emphasising the importance of transparency and inclusiveness.

“Attempts to reshape the architecture without concluding the Doha talks are not correct,” Davies said, suggesting that the BRICS countries are ready to take small steps to reinvigorate the Doha trade negotiations. The minister insisted that agriculture is at the heart of the DDA and that precious little is done to address the continued trade-distorting subsidies of the industrialised countries.

It is important to accord primacy to the Doha multilateral trade negotiations by discussing issues first at the WTO, Davies argued.

The draft agenda for what is going to be the first G20 trade ministerial meeting of its kind – beginning on Apr. 19 – sets the stage for preparing a “New Trade Narrative.”

The five-page agenda obtained by IPS, which remains confidential, squarely addresses the trade interests of the rich countries, under subheadings such as “better understanding global value chains to better regulate trade” and “services, trade finance and trade facilitation are essential to oil global value chains.”

Angel Gurria, secretary-general of the OECD, known as the rich-country think tank, and Pascal Lamy, the WTO director general, will provide the justification for pursuing this new agenda to the G20 trade ministers.

The heads of the OECD and the WTO have been working in tandem for some time now to change the manner in which global trade is measured and assessed in a neoliberal framework away from a development perspective, say analysts.

But developing countries and the least-developed countries have opposed the framework advanced by the OECD and WTO Secretariats on market-led trade reforms.

Up until now, trade negotiations, including the very setting of the trade agenda for any negotiations, have been based on a give-and-take framework. But for the first time, Mexico is asking ministers to move away “from this setting in which many trade discussions happen” to identify “the links between trade and job creation and (to improve) trade statistics that consider global chains and value addition.”

Mexico also wants ministers to focus on “the major forces and challenges facing their economies, including protectionist pressures, and what alternative policies are there to deal with them, other than trade instruments.”

“Reading the draft agenda, one gets the feeling that there is a hidden language, which shows basically the interest of developed countries and not of developing countries,” said Isabel Mazzei, a former Oxfam International trade policy advisor.

Speaking in her private capacity to IPS, she asked: “What does it really mean ‘to change the trade narrative’- does it mean to ‘move the goal posts’?”

“The Doha Round is about development, agriculture, elimination of subsidies, policy space….and now it looks like this narrative is obsolete as there is no mention of agriculture or subsidy elimination,” she said. “Many developing countries still have a big portion of their labour force coming from the agricultural and manufacturing sectors.

“Clearly the G20 draft agenda is a concerted attempt to bring the issues and concerns of rich countries from the back door,” she concluded.