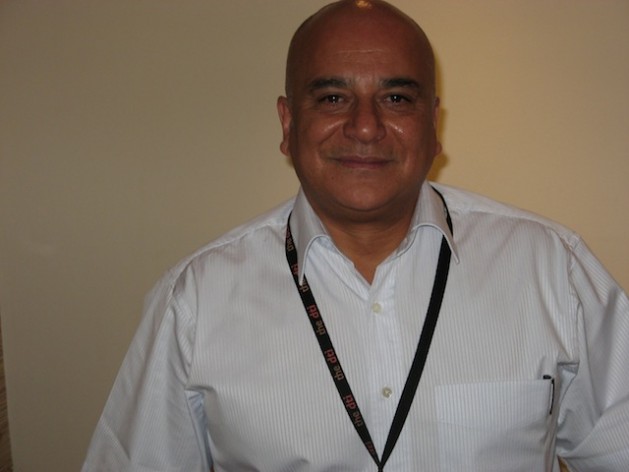 Xavier Carim, deputy director general at the Department of Trade and Industry, said that ways must also be explored to get a better balance in trade with South Africa’s BRICS partners. Credit: John Fraser/IPS

JOHANNESBURG, Dec 27 2012 (IPS) - South Africa plans to boost links between Africa and its partners in the Brazil, Russia, India and China alliance at a landmark summit, which will be held in this country in March, Xavier Carim, deputy director general at the Department of Trade and Industry, told IPS.

“The summit theme is BRICS and Africa – a partnership for development, integration and industrialisation,” explained Carim of the meeting to be held in Durban, South Africa.

“We want to align our interests to support the integration agenda in Africa, not just to focus on access to resources.”

There have been suggestions that because South Africa is the smallest of the BRICS nations in terms of population and GDP, it therefore may not deserve a place in this club of leading developing nations.

However, one answer to this criticism is that South Africa can offer its BRICS partners better access to the mineral-rich African continent and hence plays not just a national role, but a regional one, in the BRICS.

The heads of government who will be attending the BRICS summit will be invited to a meeting immediately after the main event with the New Partnership for Africa’s Development (NEPAD) Steering Committee.

“This will be at presidential level and will help to link the BRICS with Africa,” explained Carim.

Pretoria-based international affairs consultant John Maré welcomed the plan to boost relations between Africa and the BRICS grouping at the Durban summit.

“This is important. In particular, it means South Africa is facilitating an Africa-China business dialogue.

“It is important that business deals ensure there is no exploitation of Africa by the Chinese,” he told IPS.

He emphasised the importance of China in particular for Africa, suggesting that the Asian giant is the key member of the original BRIC grouping from Africa’s perspective.

“The BRIC grouping invited South Africa to join, making it the BRICS, as we are seen as the most suitable gateway to Africa,” he said.

“If there is this emphasis on Africa at the Durban summit, it will mean South Africa is playing the role everyone assumed we would play when we were invited to join.”

Maré suggested that the BRICS should seek a new dialogue with Africa along the lines of this continent’s existing one with the European Union (EU).

“The EU has a specific dialogue with Africa, through the African Union Secretariat,” he noted.

“This linkage between NEPAD and the BRICS could be a mirror image of that – and would give the BRICS a relationship with Africa which neither the United States nor Japan has.

“I am sure this Durban meeting will be the first of a regular dialogue.”

“I welcome any extension of South African influence in global economic and political groupings,” he told IPS.

“The BRICS is seen as a new vibrant group with political and growing economic clout, access to capital, able to influence new fixed investment in Africa – which is the last frontier in exploitable energy and industrial commodity reserves.”

Cruickshanks noted that Africa presently only contributes about three percent of global GDP, with South Africa accounting for around one percent.

“But Africa has the potential to advance faster than the developed world, provided that there is better access to capital, and this could be tapped through the BRICS industrial powerhouses,” he predicted.

He noted that South African resources are already significantly exploited, but questioned whether shale oil might provide new energy reserves, with the possibility of these reserves being developed through partnerships with BRICS partners, with export potential to the rest of Africa.

In another development, Carim said that there was work underway to try to anticipate and defuse trade friction within the BRICS.

He gave examples of applications for South African anti-dumping duties against chicken imports from Brazil and against paper imports from China.

“These things do come up, and it’s inevitable when you see how our trade is growing,” he explained.

“The more you trade, the more frictions – it’s a normal part of the relationship.”

However, he said that in dealing with BRICS partners “we are looking at ways of taking the sting out of these matters, before they happen.”

Carim insisted that companies which believe they are the victims of dumped goods – goods sold in a foreign market at lower prices than they are sold domestically, and which do damage to foreign rivals – do have the right to apply to their governments for protective measures.

He said that ways must also be explored to get a better balance in trade with South Africa’s BRICS partners.

“When South Africa’s imports go up, there is an impact on our domestic industries,” he argued.

“There has to be some way to alleviate the pressures, to find outlets for our exports and to find ways to support our exports – such as wine to Brazil.”

However, Carim said that the conditions are not yet ripe for a Free Trade Area among the BRICS nations.

“No one is talking of a Free Trade Area (FTA), because with an FTA you open your markets, and you can lose sectors,” he explained.

“You run risks from a free-trade perspective.”

He emphasised that there is a lot of scope for the BRICS nations to learn from one another, and gave the example of the ways in which Brazil has an effective development finance institution – from which South Africa’s Industrial Development Corporation can learn lessons.

Meanwhile, the Chinese and Indians are good at developing Industrial Development Zones – an area in which South Africa has yet to excel.

“We should look at sharing experiences, rather than destructive competition,” Carim concluded.