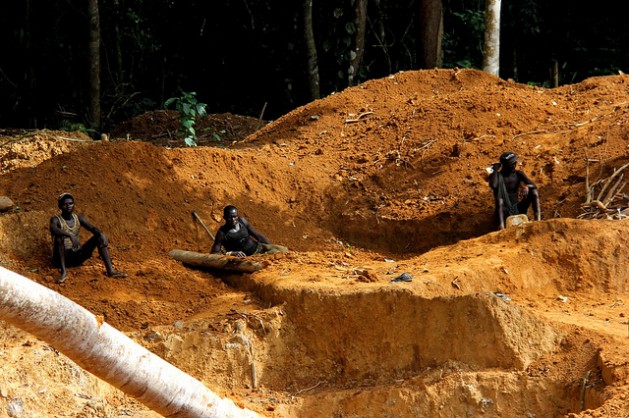 In the forest in Gbarpolu County, northwest Liberia, a group of men work on a surface gold mine. Credit: Travis Lupick/IPS

ADDIS ABABA , Dec 24 2012 (IPS) - Many of the fastest-growing countries in the world are in Africa, the poorest continent on the planet, but the potential for recently-discovered resources to generate broad-based inclusive development opportunities is massive and remains under-exploited.

“I don’t believe that African nations are even close to understanding the enormous wealth that is their natural resource endowment,” David Doepel, chair of the Africa Research Group at Australia’s Murdoch University, told IPS.

African countries preparing to cash in on mineral wealth in East Africa include Tanzania, Uganda, Mozambique and Ethiopia, based on recent discoveries of oil and gas.

“It is vitally important for any resource-rich country to have a focus of maximising the total value of any of its natural resources over the lifetime of that resource – that is a combination of maximising returns and minimising negative consequences (both environmental and social). Opportunism and urgency to extract are not necessarily ingredients for maximising value,” warned Doepel.

African countries like Nigeria have been losing out to corruption and short-sightedness in pursuit of quick profits in the oil sector. Nigeria is Africa’s largest crude oil exporter, shipping more than two million barrels per day, and is also home to the world’s ninth-biggest gas reserves. An investigative report requested by Nigeria’s oil ministry released in October revealed that a lack of transparency in the West African nation’s oil sector led to a loss of revenue of 29 billion dollars between 2002 and 2012.

The Revenue Watch Institute is a non-profit policy institute that promotes the effective, transparent and accountable management of oil, gas and mineral resources for the public good. Alexandra Gillies, head of governance at the institute, told IPS that African countries need to be circumspect at every stage of exploiting their recently-discovered oil reserves.

“For new African producers, striking a good deal can be a real challenge. They often lack capacity and familiarity with the oil sector as compared with the oil companies, and political agendas can make leaders overly anxious to begin production quickly, sometimes at the expense of better, long-term deals.”

Current working models that ensure the private sector and the government are held to account are starting to succeed in countries like Ghana.

“Ghana has taken some promising steps with its young oil sector. They have created a citizen-led Public Interest and Accountability Commission to oversee the collection and allocation of oil revenues,” said Gillies.

Countries endowed with natural resources have a tendency to heavily depend on economic activity solely based around extracting and exporting the resource as a primary product. This approach limits economic opportunities for development and makes a country vulnerable to fluctuations in commodity prices and levels of demand, according to Doepel. For example, Nigeria possesses 2.9 percent of the world’s oil and gas reserves and hazardously depends on oil and gas for 90 percent of its export revenue.

Focusing on maximising revenue by taking oil out of the ground and exporting it without any value addition could be seen as dangerous short termism and as a barrier to long-term inclusive development, he said. It is not just the resources that are a source of development but also the potential for local industry to be built around the extraction of resources.

Extraction industries offer huge opportunities for job creation and skill enhancement to improve the lives of ordinary Africans, said Doepel. He is convinced that many of the skills required by the extractive industries are transferable and could be utilised to help generate and expand economic activity in developing countries with an emerging industrial base.

“Mechanical engineers and civil engineers can work on building an open cut mine and just as easily work on water purification plants and roads and bridges,” he said.

Economic benefits can be achieved “as long as the extraction industry is deeply linked to the national and local economies and the ‘mining spend’ is captured rather than ‘exported’ along with the ore,” said Doepel.

There are many opportunities ahead for enterprising Africans to play a role in their country’s development based on the continent’s untapped resources, said Francis Steven George, CEO of Innovation Africa, an organisation that provides consulting to companies and institutions on how to exploit business opportunities for development and poverty reduction.

“Citizens can benefit by participating in the exploration of the resources. They can gain employment or can become suppliers or service providers to the industry. Governments need to help by creating an enabling environment. For example, investment in the education system to enable the relevant degree programmes to meet the needs of the industry, or by providing soft loans to local entrepreneurs who participate in the industry,” he told IPS.

Countries like Ethiopia, which has recently discovered vast mineral reserves such as gold, tantalum, oil and potash, are taking inspiration from countries like Botswana as they strive to maximise development opportunities. In early 2012 Botswana demanded that diamond company De Beers move much of its diamond-sorting operations from the United Kingdom to Botswana in an effort to localise value addition.

Citing this as a good example of how mining can enrich a country, the Ethiopian government seems determined to exercise maximum transparency and caution to ensure mining revenues benefit its population of over 90 million, which makes it Africa’s second-most populous nation.

“We want our country to benefit from our resources in the broadest sense. Development for all and not just a few is our goal,”  Ethiopia’s State Minister of Mines Tolesa Shagi told IPS.

British Nyota Minerals is set to be the first foreign company to receive a mining license to extract gold on the basis of its own exploration in western Ethiopia in the coming months.

Recent surveys indicate an estimated 500 tonnes of gold reserves in Ethiopia. According to mining experts, extraction of gold could rise to 40 tonnes a year from just over four tonnes last year, earning the country around 1.7 billion dollars based on current commodity prices.

Ethiopia is planning to sign up to Publish What You Pay, an international initiative subscribed to by over 70 countries, early next year. It holds governments of resource-rich nations accountable for the management of revenues from extraction industries.

Organisations like the Revenue Watch Institute are emphatic about the need for transparency from governments to ensure countries make the most of their resources and embark on a course of sustainable development that improves the lives of ordinary Africans.

“After the deals are signed, governments must regulate operations, maximise complex revenue streams like profit taxes, manage these revenues which are very volatile, and spend them on valuable development projects. Across all these functions there are risks of corruption, of decisions driven by patronate, favoritism and short-term political considerations,” said Gillies.

The message is clear – by having 30 percent of the world’s extractive resources, Africa has one of the greatest opportunities it will ever have to graduate its people out of poverty.