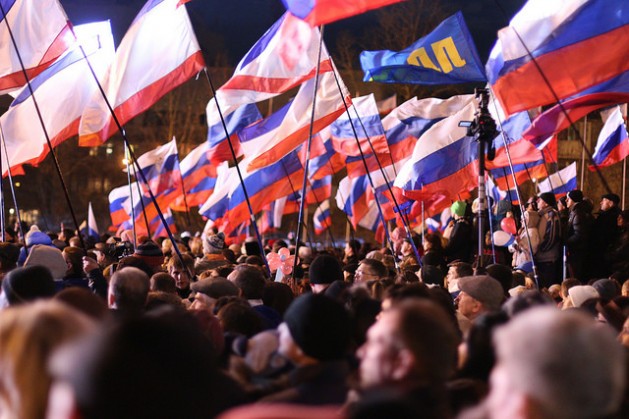 Crowds waving Crimean and Russian flags in Simferopol in Crimea after the referendum. Credit: Alexey Yakushechkin/IPS

WASHINGTON, Apr 5 2014 (IPS) - Last month’s annexation by Russia of Crimea and the West’s reaction have placed emerging regional powers, which have generally supported Moscow’s position on key geopolitical developments, in a difficult position, according to U.S. analysts.

Moscow’s move, which followed its de facto military takeover of the peninsula and a snap referendum on joining Russia of the mainly Russian-speaking population there, has also underlined differences within the so-called BRICS bloc, which includes Brazil, India, China, and South Africa, as well as Russia.

“They don’t want to be pulled into a fight between the big dogs." -- Rajan Menon

Rather than vote with Moscow, the four non-Russian BRICS members all abstained on last week’s vote at the U.N. General Assembly, which affirmed the world body’s commitment to recognise Crimea as part of Ukraine and declared the snap referendum, which took place in mid-March, invalid.

China abstained on a similar resolution in the U.N. Security Council on the eve of the referendum. Russia cast the lone veto.

“I think the Chinese decision to abstain, rather than back Russia, was a very significant decision,” said Bruce Jones, who directs the Brookings Institution’s International Order and Strategy project.

“The Chinese and the Russians have long paired up in their willingness to back each other in vetoes, and, for an issue as important as this, with the Russians putting as much emphasis on this as they did, for the Chinese to abstain was a really significant signal that they were not willing to simply close their eyes to Moscow’s action,” he told IPS.

“Overall this is an event that will sow discord within the BRICS’ grouping and will make the Chinese, Indians, Brazilians, and others think more carefully about their support for and partnership with Russia,” according to Charles Kupchan, a senior fellow at the Council on Foreign Relations (CFR).

Moscow’s annexation, which has been countered by a series of still-escalating economic and diplomatic sanctions imposed by U.S.-led Western nations, has provoked considerable division among both the non-Russian BRICS, as well as other members of the Non-Aligned Nations.

While only 11 countries – all of them either closely allied to Russia or reflexively anti-U.S. in foreign policy orientation – voted against the resolution, 58 countries, including the four BRICS members, as well as other politically significant countries such as Argentina, Egypt, Ethiopia, Iraq, Kenya, Pakistan, Uganda, and Vietnam, abstained.

One hundred countries voted in favour, including all European Union (EU) members, Turkey, Nigeria, Indonesia, and most of Latin America and the Gulf Arab states.

Israel, which habitually aligns itself with Washington, and Iran, which normally opposes it but is now engaged in critical negotiations with the West over its nuclear programme, were both no-shows.

While Western leaders appear resigned to the irreversibility of Russian control of Crimea, they are hoping that what they see as the steadily rising economic and political costs incurred by Moscow – including capital flight and NATO commitments to move military assets further east toward the Russian border — will dissuade President Vladimir Putin from further adventurism either against Ukraine or in Russian-speaking areas of Romania and Moldova. Whether that works remains to be seen.

But the precedent-creating nature of Russia’s takeover – its use of military force (albeit without bloodshed), the violation of territorial integrity of a nation with internationally recognised borders, and its justification that Ukraine’s Russian-speaking population faced persecution and discrimination from what Moscow considers a regime that had illegally seized power against an elected president – has clearly troubled many nations, especially those with significant disaffected minorities.

“What is most threatening is that most states in the world are not homogenous,” said Rajan Menon, who teaches international relations at City University of New York (CUNY).

“India is a highly diverse nation, as is China and, in a way, South Africa, too. So the idea of holding a referendum to become separate states is naturally very troubling to them.”

“I think the other BRICS were all in their way quite uncomfortable with Russia’s moves in Crimea, but they’re also quite uncomfortable with the West using sanctions because they’re all quite vulnerable to that political weapon,” noted Jones, author of a just released book on the global order, ‘Still Ours to Lead: America, Rising Powers, and the Tension Between Rivalry and Restraint’.

The latter was demonstrated in the approval by the BRICS foreign ministers March 24 of a statement in which they rejected the reported suggestion by the foreign minister of Australia, which will host the next G20 summit in Brisbane in November, that Russia should be suspended or expelled form the group.

“The escalation of hostile language, sanctions and counter-sanctions, and force does not contribute to a sustainable and peaceful solution, according to international law, including the principles and purposes of the United Nations Charter,” the statement said.

While some commentators interpreted the statement as backing Moscow, Jones noted that the foreign ministers rejected language in support of the annexation that had been sought by Russia.

“That goes to the core issue of the BRICS,” he said. “They’re strategically divided at the same time that they are unified in wanting to resist the West’s using its economic leverage to pressure them.”

Moreover, he added, the idea that Russia is leading anti-Western bloc – a theme raised by more right-wing voices here since the Crimea invasion – is “nonsense.”

Indeed, Kupchan, author of a 2012 book on world order, ‘No One’s World: The West, the Rising Rest, and the Coming Global Turn’, told IPS he thinks the Western powers have gained in the international arena as a result of the Crimea crisis.

“Even though emerging powers are reluctant to align themselves clear with the West on this front, I think that they are for the most part on board with the Western response,” he said. “And the fact that so few countries have recognised Russia’s annexation of Crimes speak for itself.”

According to Menon, the BRICS want above all “a world with multiple centres of power,” a point that applies in particular to the less powerful BRICS members, namely India, Brazil, and South Africa, as well as other emerging powers.

“They don’t want to be pulled into a fight between the big dogs,” he told IPS. “They want maximum flexibility, a kind of strategic ambiguity, if you will.”