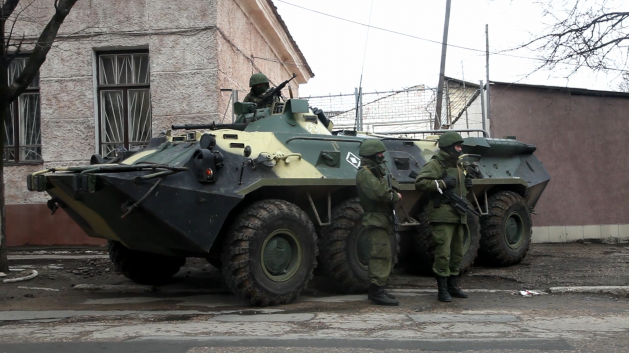 SIMFEROPOL, Ukraine , Mar 19 2014 (IPS) - Crimean officials have reported that roughly 97 percent of Crimeans voted for independence from Ukraine on Sunday, with a turnout of about 80 percent. Yet the security situation in Crimea has led many to question how free the vote really was.

“Leaving the question of the referendum’s legality aside, the situation on the ground is hardly conducive to free expression of one’s will,” Dr. Anna Neistat, Human Rights Watch associate director who is now in Crimea, told IPS.

“In the lead-up to the referendum the authorities spared no effort to control information and silence critics." -- Dr. Anna Neistat, Human Rights Watch associate director

“With unmarked armoured personnel carriers without licence plates in the streets, surrounded by fully armed men, and subjected to incessant pro-Russian propaganda, Crimeans [felt] that the choice has already been made for them,” she said.

Russian armed personnel carriers were parked on street corners throughout the Crimean capital Simferopol. The Russians have since surrounded and taken ground inside Ukrainian military bases throughout the peninsula.

Paramilitary groups of Cossacks, a Slavic people, brought from Russia roamed the streets on the day of the vote and leading up to it. Joined by members of local “self-defence” groups wearing distinctive red armbands, they attacked foreign and local journalists.

Slovak photojournalist Jan Husar was the victim of such an attack.

On Mar. 12, just a few days before the vote, Husar was taking photos at Simferopol airport of local militants barring flights coming from Kiev and Istanbul. They only let planes flying in from Moscow land.

Outside the airport terminal, he took a picture of a car passing by. “In the car were some guys,” he told IPS. “They jumped out. One had a handgun.” Husar speculates they may have been the Russian secret service.

They demanded to see his papers. A group of Cossacks started surrounding Husar. The two unidentified men from the car left after Husar deleted the picture of their vehicle but the Cossacks stayed.

They started to push him towards a nearby forest. Only after the intervention of a local resident did they let Husar go, but they kept his camera memory cards.

“In the lead-up to the referendum the authorities spared no effort to control information and silence critics,” Neistat told IPS. The units attacking journalists “acted completely outside of the law, with no clear chain of command and no accountability.”

“So imagine if you were a guy who was a [political] leader who wanted to speak out,” Husar said. “You could get in a really, really dangerous situation.”

Some activists in Crimea experienced just that. Viktor Neganov, leader of the Euromaidan movement in the Crimean city Sevastopol, led about 100 Ukrainians in his hometown to call for an end to corruption. At one protest, a pro-Russian crowd confronted the activists. They attacked Neganov, knocking him down.

“They started to punch me, I tried to protect myself but there were too many people – 10 or 20 from different sides,” Neganov told IPS.

Neganov said the protests were infiltrated and orchestrated by Russian spies and military officers pretending to be ordinary citizens. After facing threats later, he slipped away from Crimea.

Despite the crackdown, many voters also told IPS they had little concern about Russian troops occupying their homeland.

“I’m supporting the Russian troops. If there weren’t Russian troops, there would be something like what happened at Maidan in Kiev,” said Vladimir Ifirich, who said he voted for Crimea to join Russia.

The Maidan in Kiev has been the centre of pro-democracy protests over the past several months. Those protests have come to be known as the Euromaidan movement since the movement was started in opposition to former Ukrainian president Viktor Yanukovych’s decision to not sign a European Union trade deal.

“Actually we don’t experience any inconvenience with Russian troops here,” he told IPS. “The other day, we were at the theatre, today we’re going to a concert. So no problem at all.”

Construction plant worker Natasha Mamayeva echoed an indifference to the Russian occupation. “Everything is calm,” she said. “So far the Russian troops have done no harm to local people.”

At a polling station in Simferopol with Soviet-style music being blasted out, local election official Ivana Lubov-Dutrianko told IPS that the vote was free and fair.

“Everything is quiet here,” she said. “Please tell the truth: Nobody forced anyone to vote. Everyone is free to vote how they want.”

But in Bakhchisarai town, just a half hour’s drive south of Simferopol, many boycotted the vote. It’s the heartland of the Turkic ethnic group, the Tatars, who make up about 12 percent of the Crimean population. The entire Tatar population was forcibly deported from Crimea in 1944 by Soviet leader Joseph Stalin.

“If the diplomatic efforts fail, obviously some Tatars will join the insurgency and run a guerrilla war,” according to Imiril Mirov, the Bakhchisarai district government chief.

But there is no sign of any Tatar resistance movement. “We have no armed units, no self-defence, nothing at all,” Mirov told IPS. The primary goal is to avoid bloodshed, he said.