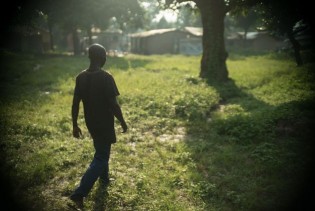 By Zack Baddorf
In the Central African Republic, 45-year-old “Theodore” was captured by an armed group in February 2017 during an attack on his village of Mingala in the country’s southeast. He was taken with 21 other men to a nearby ad hoc rebel military base and locked up in a house-turned-prison guarded by six armed men.

By Zack Baddorf
Aid organisations say a small handheld computer will allow them to more rapidly assess where food aid is needed most urgently. As a result, fewer Burundians will suffer hunger this year.

By Zack Baddorf
When Timothy was forced into the southern Sudan People’s Liberation Army (SPLA) at age 11, the first thing they did was beat him. Then they took him to a military base where his tasks were to carry other soldiers’ bags, wash their clothes, collect firewood for them, and cook their food.

By Zack Baddorf
As voting concluded in Rwanda’s presidential elections, with incumbent President Paul Kagame expected to win by a landslide, fears remain that not all citizens will accept the results amidst claims the elections were neither free nor fair.

By Zack Baddorf
The coalition of 11 major opposition parties which boycotted July 23 national assembly elections will also boycott elections to the senate on July 28. The Alliance of Democrats for Change, as the coalition is known, claims that two previous polls - to elect Burundi's district administrators and the president - were characterised by "massive fraud".

By Zack Baddorf
Some 1,700 Palestinians in the West Bank village of Bi'lin have been promised land, but so far it has not been delivered.

By Zack Baddorf
It started with a murder.

By Zack Baddorf
"Parliamentarians, shame on you!" read a sign in Bosnian carried by four union workers in downtown Sarajevo.

By Zack Baddorf
Nibaal Shriteh may soon be homeless. The 17-year-old Palestinian lives in a Hebron orphanage but, if the Israeli military has its way, she and 240 fellow orphans like her will be out on the streets.

By Zack Baddorf
The young man who agreed to be called Hamed has come a long way to do nothing. The Ivoirian would prefer to work but, after sneaking into Israel from Egypt about a month ago, he's got nothing better to do than sit in a park everyday in central Tel Aviv, wait, and hope for a government decision on his refugee application.
ADVERTISEMENT ADVERTISEMENT