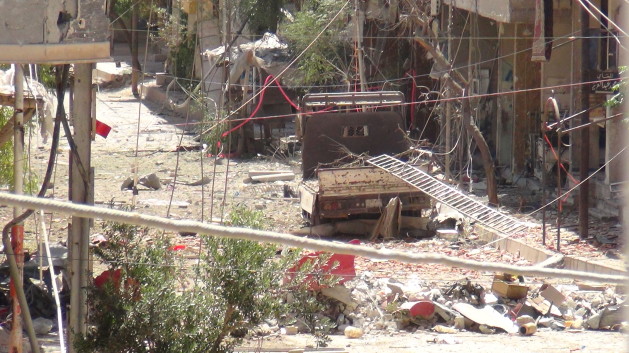 A street in a Damascus suburb after a regime attack on Friday. Credit: Dr. Omar Hakeem/IPS.

ANTAKYA, Turkey , Aug 31 2013 (IPS) - As the United States prepares to fire Tomahawk cruise missiles on military targets inside Syria, Syrians are preparing for a new phase of the conflict that has already left more than 100,000 people dead.

“There is a state of panic in Damascus,” says ‘Sham Land’, who, like many activists uses a pseudonym for security reasons. “People are lining up to get bread. The exchange rate of the dollar is very high – about 75 pounds [65 cents] increase in just the past two days. Many people are preparing to leave the city, especially people who live near the government security buildings.”

Land, who documents civilian casualties for the Syrian Network for Human Rights in Damascus, said that in the evenings fewer people are walking around on the streets or driving through the city.

“Some people are preparing food and storing it. If they have a house in the countryside, they’re leaving to go there,” Land, a 31-year-old former dentist told IPS via Skype.

Elsewhere in the capital, activist Susan Ahmad confirmed these reports.

"Many people are preparing to leave the city, especially people who live near the government security buildings."

Ahmad, a 30-year-old Syrian who lives in a regime-held part of Damascus, told IPS that “many basics are not available and goods are very expensive,” with people stocking up on supplies like first aid kits, bread, and gas in anticipation of Western military attacks. To substitute for bread, she said, people are eating rice and bulgur cereal food.

High demand on bread has been problematic off and on for months, she said, but the news of a possible foreign military attack has exacerbated the problem.

“People are afraid,” she said.

In particular, Ahmad said talk of foreign military intervention has prompted “pro-Assad people” to start “running away and taking their families out of Damascus.”

Another activist, Abu Yasin, reports that families of military officers loyal to President Bashar al-Assad are leaving Damascus and heading to Lebanon.

Yasin, 26, also said he’s seen “significant” movement of military vehicles around the city. More specifically, he saw armoured vehicles, which may be targeted by the U.S. military strikes, being driven out of the city.

Multiple IPS sources confirmed the Syrian military is dispersing its forces and equipment.

Ahmad noted that the regime is moving its weapon caches out of its security branches throughout the city. Syrian security branches are used to house military personnel, detain prisoners, and store heavy weapons.

Further, in advance of the impending attack, Ahmad claims the regime is now using schools and university campuses to house its soldiers and store its weapons.

Media activist Dani al-Qappani told IPS he has a source working for the regime who saw the military moving prisoners, including activists, into military locations to serve as human shields.

Ahmad also noticed that senior soldiers at checkpoints have been withdrawn and replaced with junior ones. She crosses the checkpoints every day and said there are now “new faces” – soldiers who all look about 18 years old. She said she thinks the regime is protecting the more seasoned fighters from attacks.

“Nobody likes foreign intervention,” she said, “but if it’s going to finish Assad, let it happen. The most important thing is to stop the shelling and killing of innocent people.”

Land agrees, saying many Syrian people would welcome the attack on the regime.

“We want the United States to bomb the vital power centres of the government, including the soldiers and headquarters of the Syrian Presidential Guard,” Land said, “but we do not want any bombs to hit the country’s infrastructure, including anything that affects the power system.”

The White House said it is not considering options that are focused on “regime change.”

“We are sure that the United States and the West have never had any intentions to help the Syrian people. They could have helped us 28 months ago, when the revolution started,” Land said.

For Land and many Syrians, their main concern is weakening the regime.

“Let me tell you something,” Ahmad said. “We have been subject to shelling for more than two years now. I can’t say that we’re now accustomed to being shelled, but I can say that we can live with [the Western attacks], if it’s going to finish Assad.”

For Abu Yasin, U.S. military strikes are a necessary evil.

Without outside assistance, he said, “there is no hope for the fall of Assad…as the rebels are making very slow progress.” Still, he is “afraid that there will be more victims in the population.”

Al-Qappani lives in the Damascus suburb of Moaddamiet al-Sham, which was attacked by chemical weapons last week. He said his eyes still hurt from the chemical attack.

Syrians in his town have been “under siege” for a year, he said.

Some Syrians in Moaddamiet al-Sham want to flee to safer areas but can’t, according to al-Qappani. There is no way for them to leave the area since the regime forces surround them.

In the suburbs of Aleppo, former medical student Radwan Kinase said some Syrians have managed to seek refuge in neighbouring Turkey in advance of the U.S. military strikes.

Kinase, who volunteers at local field hospitals in Free Syrian Army-held areas, downplayed the importance of the chemical attacks.

Kinase said he expects the United States will hit some targets and then let the fighting continue as before.