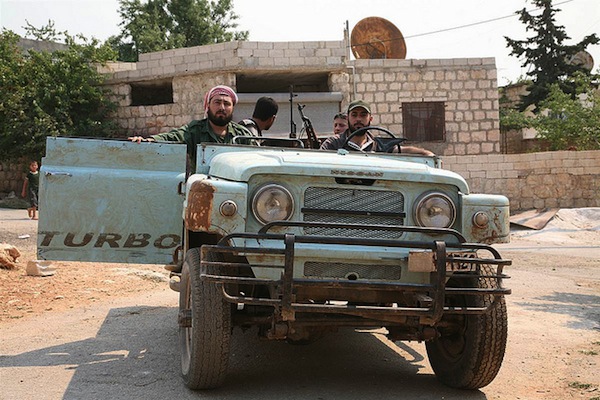 The United States is debating whether to intervene militarily in Syria. Above, Syrian rebel forces. Credit: FreedomHouse/CC by 2.0

WASHINGTON, Aug 27 2013 (IPS) - While some kind of U.S. military action against Syria in the coming days appears increasingly inevitable, the debate over the why and how of such an attack has grown white hot here.

On one side, hawks, who span the political spectrum, argue that President Barack Obama’s credibility is at stake, especially now that Secretary of State John Kerry has publicly endorsed the case that the government of President Bashar Al-Assad must have been responsible for the alleged chemical attack on a Damascus suburb that was reported to have killed hundreds of people.

Just one year ago, Obama warned that the regime’s use of such weapons would cross a “red line” and constitute a “game-changer” that would force Washington to reassess its policy of not providing direct military aid to rebels and of avoiding military action of its own.

After U.S. intelligence confirmed earlier this year that government forces had on several occasions used limited quantities of chemical weapons against insurgents, the administration said it would begin providing arms to opposition forces, although rebels complain that nothing has yet materialised.

The hawks have further argued that U.S. military action is also necessary to demonstrate that the most deadly use of chemical weapons since the 1988 Halabja massacre by Iraqi forces against the Kurdish population there – a use of which the US. was fully aware but did not denounce at the time – will not go unpunished.

Military action should be “sufficiently large that it would underscore the message that chemical weapons as a weapon of mass destruction simply cannot be used with impunity,” said Richard Haass, president of the Council on Foreign Relations (CFR), told reporters in a teleconference Monday. “The audience here is not just the Syrian government.”

While the hawks, whose position is strongly backed by the governments of Britain, France, Gulf Arab kingdoms and Israel, clearly have the wind at their backs, the doves have not given up.

Recalling the mistakes and distortions of U.S. intelligence in the run-up to the 2003 Iraq War, some argue that the administration is being too hasty in blaming the Syrian government.

"The other side, not we, gets to decide when it ends."
-- Eliot Cohen

If it waits until United Nations inspectors, who visited the site of the alleged attack Monday, complete their work, the United States could at least persuade other governments that Washington is not short-circuiting a multilateral process as it did in Iraq.

Many also note that military action could launch an escalation that Washington will not necessarily be able to control, as noted by a prominent neo-conservative hawk, Eliot Cohen, in Monday’s Washington Post.

“Chess players who think one move ahead usually lose; so do presidents who think they can launch a day or two of strikes and then walk away with a win,” wrote Cohen, who served as counsellor to former Secretary of State Condoleezza Rice. “The other side, not we, gets to decide when it ends.”

“What if [Obama] hurls cruise missiles at a few key targets, and Assad does nothing and says, ‘I’m still winning.’ What do you then?” asked Col. Lawrence Wilkerson (ret.), who served for 16 years as chief of staff to former Secretary of State Colin Powell. “Do you automatically escalate and go up to a no-fly zone and the challenges that entails, and what then if that doesn’t get [Assad’s] attention?

“This is fraught with tar-babiness,” he told IPS in a reference to an African-American folk fable about how Br’er Rabbit becomes stuck to a doll made of tar. “You stick in your hand, and you can’t get it out, so you then you stick in your other hand, and pretty soon you’re all tangled up all this mess – and for what?”

“Certainly there are more vital interests in Iran than in Syria,” he added. “You can’t negotiate with Iran if you start bombing Syria,” he said, a point echoed by the head of the National Iranian American Council, Trita Parsi.

“There is a real opportunity for successful diplomacy on the Iranian nuclear issue, but that opportunity will either be completely spoiled or undermined if the U.S. intervention in Syria puts the U.S. and Iran in direct combat with each other,” he told IPS. Humanitarian concerns and U.S. credibility should also be taken into account when considering intervention, he said.

Still, the likelihood of military action – almost certainly through the use of airpower since even the most aggressive hawks, such as Republican Senators John McCain and Lindsay Graham, have ruled out the commitment of ground troops – is being increasingly taken for granted here.

Lingering questions include whether Washington will first ask the United Nations Security Council to approve military action, despite the strong belief here that Russia, Assad’s most important international supporter and arms supplier, and China would veto such a resolution.

“Every time we bypass the council for fear of a Russian or Chinese veto, we drive a stake into the heart of collective security,” noted Daryl Kimball, executive director of the Arms Control Association. “Long-term, that’s not in our interest.”

But the hawks, both inside the administration and out, are urging Obama to follow the precedent of NATO’s air campaign in 1999 against Serbia during the Kosovo War. In that case, President Bill Clinton ignored the U.N. and persuaded his NATO allies to endorse military intervention on humanitarian grounds.

The 78-day air war ultimately persuaded Yugoslav President Milosovic to withdraw his troops from most of Kosovo province, but not before NATO forces threatened to deploy ground troops, a threat that the Obama administration would very much like to avoid in the case of Syria.

While the administration is considered most likely to carry out “stand-off” strikes by cruise missiles launched from outside Syria’s territory to avoid its more formidable air-defence system and thus minimise the risk to U.S. pilots, there remains considerable debate as to what should be included in the target list.

Some hawks, including McCain and Graham, have called not only for Washington to bomb Syrian airfields and destroy its fleet of warplanes and helicopter and ballistic capabilities, but also to establish no-fly zones and safe areas for civilians and rebel forces to tilt the balance of power decisively against the Assad government. Saudi Arabia and other Gulf states, led by Saudi Arabia, have urged the same.

But others oppose such far-reaching measures, noting that the armed opposition appears increasingly dominated by radical Islamists, some of them affiliated with Al Qaeda, and that the aim of any military intervention should be not only to deter the future use of chemical weapons but also to prod Assad and the more moderate opposition forces into negotiations, as jointly proposed this spring by Moscow and Washington. In their view, any intervention should be more limited so as not to provoke Assad into escalating the conflict.