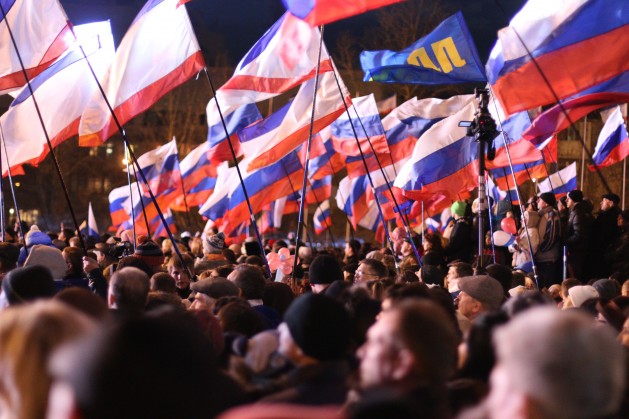 Crowds waving Crimean and Russian flags in Simferopol in Crimea after the referendum. Credit: Alexey Yakushechkin/IPS.

KIEV, Mar 18 2014 (IPS) - As Crimea prepares to become part of Russia following a referendum which much of the international community says has no legitimacy, families on the peninsula are being forced apart by the political upheaval while others are considering leaving the region.

Results of the referendum held Sunday suggest that an overwhelming majority of Crimeans want to become part of Russia, with official results showing that 97 percent of voters backed joining Russia following a turnout of just over 82 percent. Crimea has been a southern republic of Ukraine.

But while many people in cities like Sevastopol, and in Simferopol which is the regional capital, celebrated well into the night after the results were announced, the decision is already taking a toll on many local families.

There is a noticeable political divide between younger and older people.

Valery Dorozhkhin, 39, a professor at Simferopol University, told IPS: “There are conflicts in families here. In some you have grandparents whose family roots were in Russia who very strongly support Russia. Then you have their grandchildren who feel Ukrainian and will have voted against joining Russia in the referendum.”

Large parts of southern and eastern Ukraine have historically had close cultural ties to Russia. But these have always been especially strong in Crimea.

Crimea was annexed by the Russian empire in the late 18th century. But Russians did not form a majority in the region until after World War II.

This came about largely after Soviet dictator Josef Stalin deported the entire population of Tatars – around 200,000 people – en masse to labour camps in central Asia in 1944 on false charges that they had collaborated with Nazis. Nearly half of those deported died of starvation or disease within a year. Russians were moved into Crimea to replace those expelled.

In 1954, then Soviet leader Nikita Krushchev decided to make Crimea a part of Ukraine. Today, 60 percent of the Crimean population is ethnic Russian and even more speak Russian as their first language.

As part of the Soviet Union, any potential ethnic tensions were largely negligible, but since Ukraine’s independence in 1991 there have been calls from separatist groups among the Russian community in Crimea for secession, with waxing and waning support.

The political upheavals across Ukraine in recent months exacerbated those ethnic tensions and the recent run-up to the elections has been marked by, many rights activists and independent observers say, violence and repression against non-Russian communities and those supporting the new Ukrainian government in Kiev.

But there is not just an ideological dividing line between ethnic Russians and Ukrainians. There is also a noticeable political divide between younger and older people.

Of the thousands who turned out in rallies in support of Crimea remaining part of Ukraine ahead of the referendum, many of them, although certainly not exclusively, were from the younger generation.

Many younger people who have never known Crimea as anything other than a part of Ukraine have found themselves confused and in some cases fearful of what life under a different regime will be like.

“It is especially hard for younger people in Crimea at the moment. They see themselves as Ukrainians, they feel Ukrainian,” Dorozhkhin told IPS.

This concern about what will come next has already led to some people considering leaving Crimea. There have been reports of individual families deciding to leave the region, while others are concerned about their work.

Some Ukrainians living in Crimea have said they have lost their jobs for perceived support to authorities in Kiev.

Vladimir Vasylenko, a 37-year-old NGO worker in Sevastopol, sums up the mood of those who are concerned about what the future holds for them.

Speaking to IPS, he is worried and almost tearful, as he explains how he is afraid that Russian authorities’ generally negative attitude to the third sector could put his work in jeopardy. But he says he is also worried because he has no idea what life in general will be like under Russian rule.

“I wonder whether I should leave or not. I sometimes think that yes, I will, but I have older members of my family, my mother and grandmother, who will not leave, who do not want to go. I have to think of them too. I just don’t know what to do. The worst thing is that no one knows what is going to come next.”

Tensions remain in Crimea despite the support shown for a return to Russia in the referendum. The Tatar population, which makes up 13 percent of the Crimean population, boycotted the referendum. There is a growing fear in communities of Tatars, many of whom distrust Russia because of what happened to their grandparents and ancestors under Stalin.

They say that since the Russian occupation, their communities have grown fearful of attacks by armed pro-Russian “self-defence” groups, which they say roam the streets at night.

Some say that they have woken up to find white crosses daubed on their front doors and out of fear of attack they have set up their own self-defence squads controlling areas with Tatar populations, while others guard mosques.

But those who backed integration into Russia now see a bright future ahead for Crimea.

Aleksandr Pavluk, a 54-year-old resident of Simferopol who works in one of Crimea’s key industries, tourism, told IPS: “Everything here is fine after the referendum. We’re all very happy and people are looking forward to being part of Russia.

“We are also hoping to have a good summer tourist season when we expect to see lots of holidaymakers from both Russia and from Ukraine.”