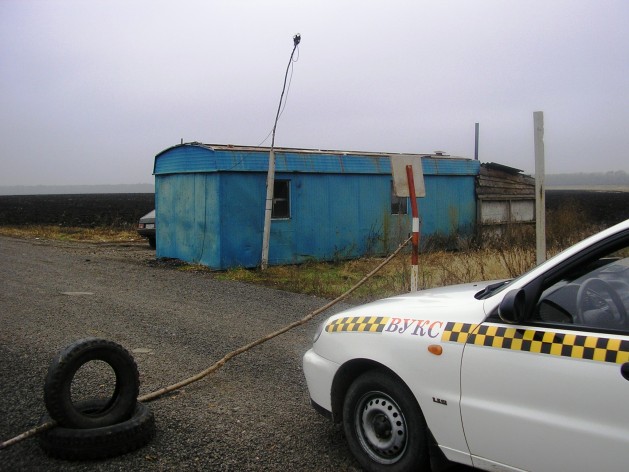 A post on the Russia-Ukraine border. Demarcation of the border is often flimsy. Credit: Susan Astray/CC2.0.

MOSCOW, Mar 6 2014 (IPS) - Elena Smolenskaya doesn’t hesitate a second when asked what she thinks about the Russian military intervention in Crimea. The 23-year-old Moscow student is convinced that President Vladimir Putin had no choice but to order troops into the country.

“The military action was right to protect Russian people in Crimea. This is why the majority of Russian people support what President Putin is doing. He is protecting Russian interests,” she told IPS.

“The adoption of more restrictive laws is a possibility against the current backdrop of anti-Western hysteria in state-sponsored and loyalist media.”

Elena’s view is far from uncommon – especially in areas outside the country’s major cities where support for Putin has always been highest – and appears to be growing every day.

Before the Ukrainian revolution polls in Russia had shown that the majority of Russians were against intervention in their western neighbour’s affairs, but the mood appears to have shifted in the last few weeks.

While there were demonstrations in Moscow against the occupation at the weekend – swiftly suppressed with the arrest of hundreds – there were much larger counter protests in support of it. In Russia’s second city, St Petersburg, more than 15,000 turned up at a rally supporting the military operation in Crimea.

Local analysts say that many Russians see the new government in Kiev as strongly anti-Russian and made up of dangerous neo-fascists. This image was reinforced when soon after Moscow-friendly former Ukrainian president Viktor Yanukovych fled the country, its new leaders proposed a law banning Russian as an official language.

In a survey by the independent Russian Levada polling group at the end of February, 43 percent of respondents described the Ukrainian protests and subsequent revolution as a violent coup, and almost a quarter categorised it as a civil war. A poll by the same organisation showed that a third thought that the overthrow of the Yanukovych regime was led by Ukrainian nationalists supported by Western secret service agents.

Clashes in Eastern Ukraine between pro-Russian locals and supporters of the Kiev government after the revolution reinforced these views.

As attention turned to Crimea, which was part of Russia until 1954 when then Soviet leader Nikita Krushchev made it part of Ukraine republic within the Soviet Union, many agreed with Kremlin claims that military intervention was a necessity to protect the almost 60 percent of Crimea’s population that is ethnic Russian, and help protect a people and culture which many in Russia see as their own.

Vasily Gomelsky, a 56-year-old clerk in Moscow, told IPS: “President Putin is right and I completely support him. He just wanted to protect the Orthodox [Christian] civilisation that has been there for hundreds of years. We were all afraid of what might happen if neo-fascists [in Kiev] take over there.”

Russian media, much of which is formally or informally state-controlled, has widely pushed the same view.

The Komsomolskaya Pravda national daily carried an interview with a 20-year-old Russian activist present at the pro-EU Euromaidan demonstrations in Kiev earlier who claimed that there were “German and American mercenaries” among the protestors leading younger members of the Ukrainian radical far right Pravy Sektor movement.

Criticism of the occupation in any media has been scarce. Where it has occurred it has, in some cases, been swiftly dealt with by the authorities.

Prof. Andrei Zubov of the Moscow State Institute of International Relations – which was founded by and remains institutionally a part of the Russian Foreign Ministry – wrote an article in the Vedemosti national daily condemning the intervention and likening President Putin to Hitler.

In another interview he said that the Russian president had “clearly lost his mind.”

He was sacked early this week. He said he believed the Foreign Ministry had forced his bosses to get rid of him.

Some critics say the professor’s dismissal typifies the approach to dissent of an administration which has been widely condemned by activists and the international community for its crackdown on rights since Putin began his latest presidential term in 2012.

The adoption of controversial legislation on gay propaganda, a crackdown on third sector organisations, repression of political opponents and systematic harassment of activists, among others, have all been cited as examples of Russian authorities’ disregard for rights.

Others warn that new-found support in the wake of the conflict will allow President Putin to pursue even more rigorous curbs on basic freedoms.

“Overall, Putin’s foreign policy commands support. The Crimean conflict will allow him to consolidate the country and the majority of the population will, in the end, support him. It will also allow him to put an additional squeeze on dissent,” Nikolai Sokov, a Senior Fellow at the Vienna Centre for Disarmament and Non-Proliferation (VCDNP), told IPS.

The bill included, among other things, heavily-criticised controls of internet use. But it was approved without problems and one MP was reported as saying that critics need only go to Kiev to see why the bill was so desperately needed.

“The bills were actually introduced several weeks ago but the Ukraine conflict ensured they would be adopted,” said Sokov.

Also, the Russian State Agency for Financial Monitoring said Wednesday that it had launched an investigation after uncovering that Ukrainian ultra-nationalists were being funded by the same donor organisations as some Russian NGOs.

Controversial legislation forces NGOs in Russia which receive finance from abroad to be registered as ‘foreign agents’, and are subject to regular checks by local authorities.

Tanya Lokshina, Russia programme director at Human Rights Watch, told IPS: “The news of the investigation is very threatening for all NGOs which receive foreign funding.”

She added: “The adoption of more restrictive laws is a possibility against the current backdrop of anti-Western hysteria in state-sponsored and loyalist media.”

Meanwhile, support for President Putin among ordinary Russians appears firm with many saying it is he, rather than the West, who is looking to avoid escalating the current crisis into a war.

“Some people did fear that [occupying Crimea] could lead to war, but as we have seen, President Putin has acted sensibly with regard to this. He is looking out for Russian interests, not looking for confrontation,” Smolenskaya told IPS.