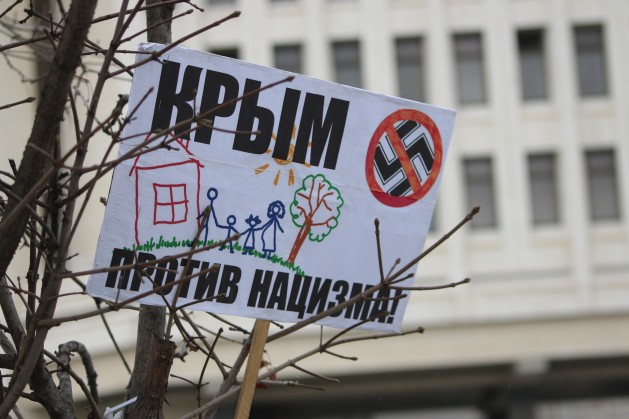 A banner used by pro-Russian supporters during rallies in Simferopol in Crimea. It reads: ‘Crimea, Against Nazism’. Credit: Alexey Yakushechkin/IPS.

KIEV, Mar 14 2014 (IPS) - Crimea is facing a violent wave of human rights abuses, activists warn, with kidnappings of journalists and rights campaigners, harassment of non-Russian minorities and reports of growing persecution of anyone thought to be sympathising with the pro-European Kiev government.

They say the autonomous region, now in de facto control of Russian troops, is spiralling into violence and repression ahead of a planned referendum on its future this Sunday.

“Come Sunday the Russians will take control and its army will probably change the entire functioning of Crimea. We can only see more protests and more violence.” -- Marina Tsapok, spokeswoman for the Association of Monitors of Human Rights in Ukraine

Marina Tsapok, spokeswoman for the Association of Monitors of Human Rights in Ukraine, told IPS: “People have been kidnapped and are missing. The situation is getting worse, it is completely illegal and we are expecting even more violence, both before the referendum and after it.”

Human rights groups have feared a crackdown on potential opponents of Crimean secession ever since it was announced that the autonomous region would hold a referendum on its future.

The region’s authorities have made it clear they want Crimea to become part of Russia. Pro-Russian support among the local population – 60 percent of which is ethnic Russian – is strong.

Russian propaganda against the new Ukrainian government – which it has painted as an illegally-formed body led by fascists and neo-Nazis bent on destroying the country – has helped foment not just pro-independence sentiment, but also driven mounting antipathy towards supporters of a unified Ukraine in Crimea.

At rallies last weekend, pro-Ukrainian supporters were savagely beaten and whipped by pro-Russian militiamen. In one incident more than 100 men aggressively forced a group of women to end their peaceful protest against Russian military intervention in front of the Ukrainian Naval headquarters in Crimea’s capital, Simferopol. Many such incidents have gone unnoticed or unpunished by police, fuelling fears that pro-Russian groups are now able to violate human rights with impunity.

There have also been reports in the media of Ukrainians in Crimea afraid to leave their homes for fear they will be attacked by pro-Russian groups.

Pro-Ukrainian locals are not the only ones facing harassment though. Activists and journalists attempting to monitor the situation are being targeted.

The Euromaidan information service, which is chronicling and reporting on alleged rights abuses, says there have been a growing number of kidnaps in recent days. The name Euromaidan derives from pro-EU protests in central Kiev over the last several months.

Tsapok also told IPS that on Wednesday this week five people had been reported missing, believed kidnapped. Four were rights activists and another was a former military officer. This came just hours after five people, including journalists and activists, were found alive following abductions.

Others say they have faced death threats for trying to take photos of troops and masked gunmen outside military and civilian buildings.

Meanwhile, the region’s largest ethnic minority – the Tatars – are also under threat.

The Tatars, Turkic Muslims who lived in the region for centuries, were forcibly repatriated from Crimea in 1944. More than 200,000 were sent to labour camps in central Asia when Soviet dictator Josef Stalin accused them of collaborating with the Nazis. Almost 40,000 of them died during the journeys.

Russians were moved in in their place and Tatars only began returning to the region as the Soviet Union began to disintegrate.

They now account for roughly 14 percent of the Crimean population and, because of their history, many remain distrustful of Russia.

Since the Russian occupation, many say their communities have grown fearful of attacks by armed pro-Russian self-defence groups which they say roam the streets at night. They say that they have woken up to find white crosses daubed on their front doors.

Out of fear of attack they have set up their own self-defence squads controlling areas with Tatar populations while others guard mosques.

Heather McGill, a researcher for Amnesty International, told IPS: “These reports of the markings on the doors of Tatar people, of people’s passports being rounded up and taken away for use in the referendum, as well as the kidnappings and other human rights abuses that we are seeing show how bad things are. And, from what we can see, they are only getting worse.”

With the referendum widely expected to back Crimea joining Russia, the Kremlin will be in firm control of the peninsula. This raises questions over whether the new Crimean authorities will adopt Moscow’s current approach to human rights which has been widely condemned by the international community.

McGill told IPS: “It is very hard to see how things will be [concerning human rights] in Crimea if the vote comes out in support of joining Russia. But I would wager it will be worse than things are currently.”

Meanwhile, in Kiev, where the new Ukrainian government continues to work with Western leaders to find a solution to the Crimea crisis, rights activists fear the worse for their partner groups in Crimea as well as the future prospects for civil liberties and basic rights on the peninsula.

Tsapok told IPS: “Come Sunday the Russians will take control and its army will probably change the entire functioning of Crimea. We can only see more protests and more violence.”

But she also appealed for human rights activists and independent media everywhere to ensure that rights violations in Crimea continue to be reported and monitored.

Last week, international rights monitors were stopped from entering Crimea at gunpoint. A team from the Organisation for Security and Co-operation in Europe was turned back by members of local “self-defence” units controlling roads into the region.

Tsapok said: “Crimea today affects everyone. Today’s front line is between legality and lawlessness, between news and propaganda, between civilisation and medieval savagery.

“I say to all friends, please spread information about the situation in the Crimea, about beatings of journalists, kidnapping of civil society activists, the ‘referendum’ at gunpoint. People should not remain indifferent – or tomorrow all these bad things could happen to someone else.”