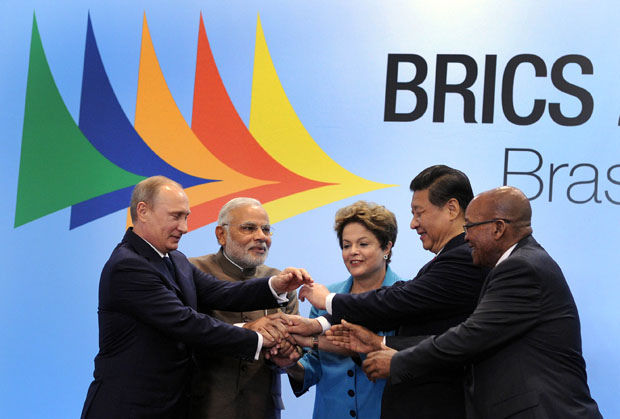 MONTEVIDEO, Jul 18 2014 (IPS) - While this week’s BRICS summit might have been off the radar of Western powers, the leaders of its five member countries launched a financial system to rival Bretton Woods institutions and held an unprecedented meeting with the governments of South America.

The New Development Bank (NDB) and the Contingent Reserve Arrangement signal the will of BRICS countries (Brazil, Russia, India, China and South Africa) to reconcile global governance instruments with a world where the United States no longer wields the influence that it once did.

“The U.S. government clearly doesn't like this, although it will not say much publicly.” -- Mark Weisbrot

More striking for Washington could be the fact that the 6th BRICS summit, held in Brazil, set the stage to display how delighted the heads of state and government of South America – long-regarded as the United States’ “backyard”— were to meet Russia’s president Vladimir Putin.

At odds with Washington and just expelled from the Group of Eight (G8) following Russia’s intervention in the Ukrainian crisis, Putin was warmly received in the region, where he also visited Cuba and Argentina.

Argentina, troubled by an impending default, is hoping Russian energy giant Gazprom will expand investments in the rich and almost unexploited shale oil and gas fields of Vaca Muerta.

Although Argentina ranks fourth among the Russia’s main trade partners in the region, Putin stressed the country is “a key strategic partner” not only in Latin America, but also within the G20 and the United Nations.

Buenos Aires and Moscow have recently reached greater understanding on a number of international issues, like the conflicts in Syria and Crimea, Argentina sovereignty claim over the Malvinas/Falkland islands and its strategy against the bond holdouts.

Meanwhile, the relationship between Washington and Buenos Aires remains cool, as it has been with Brasilia since last year’s revelations of massive surveillance carried out by the National Security Agency against Brazil.

Some leftist governments –namely Bolivia, Venezuela and Ecuador— frequently accuse Washington of pursuing an imperialist agenda in the region.

But it was the president of Uruguay, José Mujica –whose government has warm and close ties with the Barack Obama administration— who better explained the shifting balance experienced by Latin America in its relationships with the rest of the world.

In an interview before the summit, Ambassador Flávio Damico, head of the department of inter-regional mechanisms of the Brazilian foreign ministry, said a clause on transparency in the New Development Bank’s articles of agreement “will constitute the base for the policies to be followed in this area.”

Article 15, on transparency and accountability, states that “the Bank shall ensure that its proceedings are transparent and shall elaborate in its own Rules of Procedure specific provisions regarding access to its documents.”

There are no further references to this subject neither to social or environmental safeguards in the document.

After a dinner in Buenos Aires and a meeting in Brasilia with Putin, Mujica said the current presence of Russia and China in South America opens “new roads” and shows “that this region is important somehow, so the rest of the world perhaps begins to value us a little more.”

Furthermore, he reflected, “pitting one bloc against another… is not good for the world’s future. It is better to share [ties and relationships, in order to] keep alternatives available.”

Almost at the same time, Washington announced it was ready to transfer six Guantanamo Bay detainees to Uruguay, one of the subjects Obama and Mujica agreed on when the Uruguayan visited the U.S. president in May.

Mujica has invited companies from United States, China and now Russia to take part in an international tender to build a deepwater port on the Atlantic ocean which, Uruguay expects, could be a logistic hub for the region.

But beyond Russia, which has relevant commercial agreements with Venezuela, the real centre of gravity in the region is China, the first trade partner of Brazil, Chile and Perú, and the second one of a growing number of Latin American countries.

China’s president Xi Jiping travels on Friday to Argentina, and then to Venezuela and Cuba.

“The U.S. government clearly doesn’t like this, although it will not say much publicly,” said Mark Weisbrot, co-director of the Center for Economic and Policy Research.

“With a handful of rich allies, they have controlled the most important economic decision-making institutions for 70 years, including the IMF [International Monetary Fund], the World Bank, and more recently the G8 and the G20, and they wrote the rules for the WTO [World Trade Organisation],” Weisbrot told IPS.

The BRICS bank “is the first alternative where the rest of the world can have a voice.  Washington does not like competition,” he added.

However, the United States’ foreign priorities are elsewhere: Eastern Europe, Asia and the Middle East.

And with the exception of the migration crisis on its southern border and evergreen concerns about security and defence, Washington seems to have little in common with its Latin American neighbours.

“I wish they were really indifferent. But the truth is, they would like to get rid of all of the left governments in Latin America, and will take advantage of opportunities where they arise,” said Weisbrot.

Nevertheless, new actors and interests are operating in the region.

The Mercosur bloc (Argentina, Brazil, Paraguay and Uruguay) and the European Union are currently negotiating a trade agreement.

Colombia, Chile, México and Perú have joined forces in the Pacific Alliance, while the last three also joined negotiations to establish the Trans-Pacific Partnership.

In this scenario, the BRICS and their new financial institutions pose further questions about the ability of Latin America to overcome its traditional role of commodities supplier and to achieve real development.

“I don’t think that the BRICS alliance is going to get in the way of that,” said Weisbrot.

According to María José Romero, policy and advocacy manager with the European Network on Debt and Development (Eurodad), the need to “moderate extractive industries” could lead to “changes in the relationship with countries like China, which looks at this region largely as a grain basket.”

Romero, who attended civil society meetings held on the sidelines of the BRICS summit, is the author of “A private affair”, which analyses the growing influence of private interests in the development financial institutions and raises key warnings for the new BRICS banking system.

BRICS nations should be able “to promote a sustainable and inclusive development,” she told IPS, “one which takes into account the impacts and benefits for all within their societies and within the countries where they operate.”