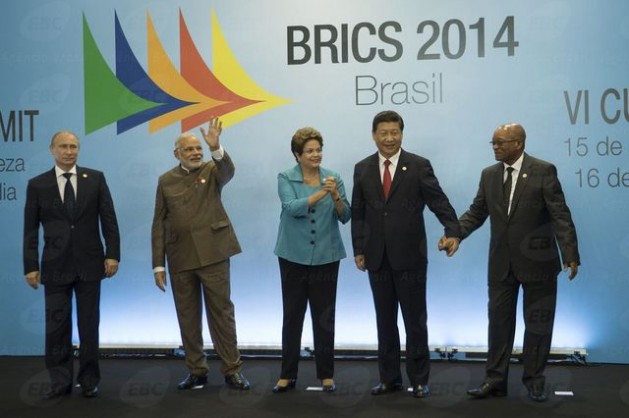 The five BRICS leaders pose for the cameras at the sixth annual summit in the Brazilian city of Fortaleza. Credit: Agência Brasil/EBC

Two other agreements, one for Cooperation among Export Credit and Guarantees Agencies and another on Cooperation for Innovation among national development banks, complete the structure established Tuesday Jul. 15 by the five heads of state in the northeastern Brazilian city of Fortaleza.

The BRICS Summit concludes Wednesday with a meeting between the five leaders and the presidents of the Union of South American Nations (UNASUR) held in Brasilia, as well as several bilateral meetings.

The NDB and CRA are not being created “against anyone,” but as a “response to our needs,” said the summit host, Brazilian President Dilma Rousseff, at a press conference after the meeting with Vladimir Putin (Russia), Narendra Modi (India), Xi Jinping (China) and Jacob Zuma (South Africa).

BRICS leaders reject interpretations that the mechanisms have been created in opposition to or as alternatives to the World Bank and the International Monetary Fund (IMF), part of the Bretton Woods global financial system established in the 1940s.

Social inclusion - a voice from India

A key promoter of the New Development Bank and the country that will appoint the first NDB president, India was also the voice of social concerns at the Sixth BRICS Summit.

Prime Minister Narendra Modi said in Fortaleza that fighting poverty should be the main focus of the group, especially through construction of the Sustainable Development Goals which will shape the development agenda after 2015.

Food security is another issue that Modi identified as a priority, as did members of the Indian business community who participted in the BRICS Business Forum on Monday Jul. 14. It is a highly sensitive topic in India, where hundreds of millions of people live in poverty, most of them subsistence farmers in rural areas.

BRICS should not be a centralised, hierarchical institution, but should focus attention on local areas and people, and involve youth, Modi said in his speech at the Summit. He suggested the creation of a Young Scientists’ Forum and a BRICS university, using the internet for intensive contact between students in the five countries.

The uniqueness of BRICS, he said, is that “for the first time” it brings together a group of nations on the basis of “future potential,” rather than existing characteristics. This “forward looking” idea creates fresh perspectives and institutional changes for a more stable world, overcoming present economic conflicts and turbulence, Modi said.

The theme of the BRICS Summit is “Inclusive growth: sustainable solutions.”

Africa is in urgent need of “inclusive and dynamic growth,” said Jacob Zuma, the president of South Africa, while Russian President Vladimir Putin proposed the formation of a BRICS Energy Association, with a fuel reserve bank to ensure the energy security of its member states.

The NDB will complement existing multilateral and regional financial institutions, whose lack of resources constrain financing of infrastructure projects in developing countries, according to the summit’s final declaration, signed by the participating heads of state.

The CRA, a mechanism through which the five countries make available a total of 100 billion dollars from their reserves, is a currency pool that provides financial security for its members, without departing from the IMF, summit speakers said.

If one of the BRICS countries wishes to borrow more than 30 percent of the sum it is entitled to, in order to overcome threats to its balance of payments, it will have to face questions from the IMF about conditions of payment, said the Brazilian finance minister, Guido Mántega.

Brazil, Russia and India can withdraw up to the value of their contributions of 18 billion dollars each. South Africa may take out twice the five billion dollars it will contribute to the mechanism, and China up to half its 41 billion dollar commitment.

The new institutions “consolidate” the BRICS alliance, Mántega said. Before they become operational, they must be ratified by the countries’ parliaments, he said.

The bank and the reserve fund are so constituted as to prevent aspirations of dominance, Rousseff said. The countries will have equal shares in the NDB, of 10 billion dollars each, and equal voting rights. The capital may later be doubled.

Bank presidents and its governing councils will be appointed on a rotating basis.

China will contribute 41 percent of CRA funds but decisions will be taken by a broader majority, reaching consensus for the negotiation of larger loans, Mántega said.

But the NBD headquarters will be located in the Chinese city of Shanghai, and it will be difficult to avoid the economic and monetary weight of the Asian power from translating into greater decision-making power for Beijing.

The NDB’s composition avoids inequalities at the outset, but equal participation is only a formality as “in practice the future trend will be towards greater Chinese influence,” according to Carlos Langoni, former president of the Brazilian Central Bank.

To be effective, the bank will have to increase its initial capital of 50 billion dollars, recruiting new financing resources, and in this as well as in crises the “dominant role” of the country offering most capital and guarantees is an influential factor, added Langoni, who is the present director of the World Economics Centre at the Getulio Vargas Foundation.

China is interested in diversifying its investments, in multilateral and regional institutions as well as bilaterally. In recent years it has become the largest investor in Latin America.

It already participates in several regional financial mechanisms, such as the Chiang Mai Initiative, similar to the CRA and involving countries of the Association of Southeast Asian Nations, and it is seeking to establish the Asian Infrastructure Investment Bank, as an alternative to the Asian Development Bank in which Japan has decisive influence.

Langoni believes that the BRICS, with the CRA resting on “mega-economies” with their enormous currency reserves, will in the long term be able to “grow faster and have more weight than the IMF, which is already facing difficulties raising funds because of its rules.”

However, the IMF will remain the most powerful multilateral financial body over the next decade, he said.

The rise of the BRICS reflects a multipolar world, as the alliance includes military powers like Russia and China, nuclear powers like both these countries and India, and “moderators” without military ambitions like Brazil and South Africa.

Progress in strengthening and institutionalising the group at its Fortaleza summit could help reduce border tensions existing between China and India, or between Russia and the West, Langoni said.

In his view, what cements the group is its “frustration over the action of multilateral bodies, particularly the IMF,” in the face of the financial crises. These institutions are very complex and made up of a large number of countries.

The BRICS countries can operate with greater ease with their own financial instruments, which can also supply their urgent needs for investment in infrastructure, especially in Brazil and India, he argued.

The BRICS “found their identity” by working with the Group of Twenty (G20) industrial and emerging countries to defend the stimulation of growth, rather than recession-inducing austerity, after the 2008 global financial crisis, Mántega pointed out. Later they came to demand reform of the IMF, which spearheaded response to the crisis.

Some reforms to grant emerging countries greater participation in IMF decision-making were approved by the G20, but then stalled because they were rejected in the U.S. Congress.

The IMF is regarded as extremely undemocratic, because the United States has power of veto and some countries of the industrial North have a majority of votes, in contradiction with the present correlation of economic forces and the weight of emerging powers.

The absence of reforms “negatively impacts on the IMF’s legitimacy, credibility and effectiveness.” The reforms must lead to the “modernisation of its governance structure so as to better reflect the increasing weight of emerging markets and developing countries (EMDCs),” says the Fortaleza Declaration, signed by the five BRICS leaders.