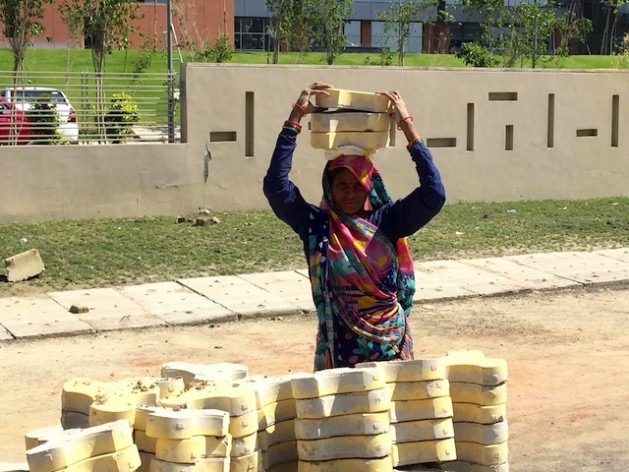 Mechanisation and the incorporation of new technologies in sectors like the construction industry means that men are the preferred candidates for certain jobs. Credit: Neeta Lal/IPS

NEW DELHI, Mar 30 2015 (IPS) - It calls itself the ‘world’s largest democracy’ but the 380 million working-aged women in India might disagree with that assessment.

Recent research shows that only 125 million women of a working age are currently employed, with the number of women in the workforce declining steadily since 2004.

"It is imperative to acknowledge that we have a crisis at hand, and we [must] work towards female empowerment to help India realise its full economic potential." -- Preet Rustagi, joint director of the Institute for Human Development in New Delhi
Experts say these figures should serve as a wake-up call for Asia’s third largest economy, adding that unless this nation of 1.2 billion people begins to provide equal opportunities for women, it will miss out on vital development and poverty-reduction goals.

According to a report released earlier this month by the International Monetary Fund (IMF), India’s female labour force participation (FLFP) rate is amongst the lowest among emerging markets and peer countries.

India’s FLFP – the share of employed women or job seekers among the working-age female population — is 33 percent, almost half of the East Asian average of 63 percent and well below the global average of around 50 percent.

The IMF’s findings amplify what has been already been identified as a disconcerting trend in India lately – the absence of a diverse and inclusive workforce.

A debate is currently raging across the country about the skewed gender balance in Indian corporate boardrooms where women hold barely five percent of seats – lower than all the other countries that comprise the BRICS group of emerging economies (Brazil, Russia, India, China and South Africa).

A progressive new law was passed in 2013 that requires all companies listed on the national stock exchange to have at least one female board member by August 2014. However, the deadline had to be extended to April 2015 as only a few companies came forward to appoint women to these top positions.

The lack of women workers in India is a “huge missed opportunity” for the country’s economic growth, lamented IMF Managing Director Christine Lagarde on a recent trip to this country of 1.2 billion people.

Gender diversity in the workplace isn’t just about political correctness; it is an economic imperative, economists say.

A study undertaken by the IMF in 2013 proves that India’s growth has been stunted by women’s exclusion from the workforce.

“Assuming the gender gap is halved by 2017 and cut to one-fourth of its 2008 value in 2027, India’s per capita income could be 10-13 percent higher than under the baseline scenario of unchanged gender inequality in 2020 and 2030, respectively,” the report stated.

Counting and accounting for women’s labour

Some say the primary explanation for the apparent ‘absence’ of working women is a dearth of national-level data on the informal sector. Since a majority of women perform mostly unpaid, domestic labour on a regular basis, their contribution to the economy does not ‘count’ when the country tallies up its records of the formal labour market. 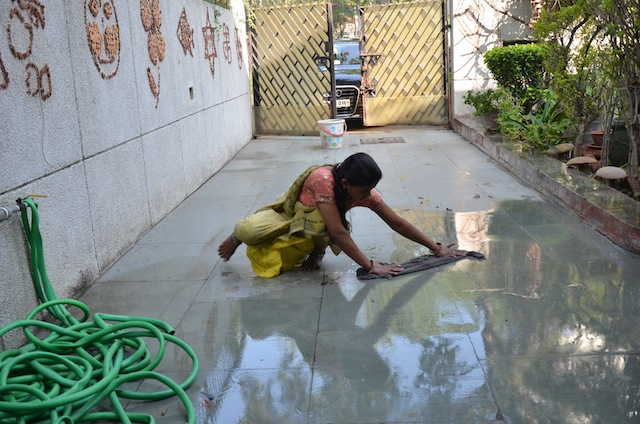 Because women primarily perform unpaid domestic labour, they do not always ‘count’ in the country’s records of the formal economy. Credit: Neeta Lal/IPS

“A woman’s work in her own household is not counted as an economic activity, and does not get factored into the national income statistics,” explains Preet Rustagi, joint director of the Institute for Human Development in New Delhi.

“This situation is even worse than the case of services by a paid domestic help, which is at least considered an economic activity and is counted in the country’s income.”

Rustagi tells IPS that this is unfortunate, as women’s domestic duties in India cover a range of responsibilities like cooking, caring for the elderly, and rearing children, all work that is crucial to the economy and all of Indian society.

In the villages, women additionally engage in the vital task of animal husbandry, which is also excluded from enumeration, elaborates Rustagi.

“The entrenched Indian patriarchal culture idealises women in, and restrict them to, the roles of housewives and mothers. Notions of socio-ritual superiority of a group or family can be directly linked to higher restrictions on women including their physical mobility and work outside homes,” explains Bhim Reddy, associate editor of the Indian Journal of Human Development who has researched extensively on recruitment practices in labour markets.

Reddy adds that a higher school enrolment rate, especially for women between the ages of 14 and 21, has also contributed to an asymmetrical workforce.

“A large section of females in this age group that used to be part of the work force earlier is now in schools and colleges, and this is getting reflected in a drop in the female LFPR,” elaborates Reddy.

But research by Everstone Capital, an investment management company, shows that while the number of women enrolling in college has grown manifold, it has not translated into a proportionate increase of women graduates in the workforce.

At 22 percent, the rate of India’s female graduates entering the workforce is lower than the rate of illiterate women finding jobs.

Worse, participation of Indian women in the workforce plummeted from 33.7 percent in 1991 to 27 percent in 2012, according to United Nations statistics. In 2011-12, less than 20 percent of the total workers in non-agricultural sectors was women.

Surprisingly, female labour participation has been found to be particularly low even among urban, educated women — a demographic typically assumed to experience fewer social barriers.

According to government statistics, in 2009-10, the proportion of those attending to domestic duties (and therefore out of the formal labour force) was 57 percent among urban females with graduate degrees or higher, compared to just 31 percent among rural females with primary or middle school education.

Experts say the advent of mechanisation and incorporation of new technologies in agriculture and the construction industry have led to the ‘masculinisation’ (or preference for males for a certain job profile) of employment patterns.

Exploitation and harassment in the workplace have worsened the situation. India passed a new law against sexual harassment last year, under which organisations with more than 10 workers have to set up grievance committees to investigate all complaints.

However, according to a study by Jawaharlal Nehru University, less than 20 percent of employers in the capital, New Delhi, comply with the rules.

Household surveys show that a more welcoming environment would compel many stay-at-home women to take on regular work. At present, issues of transport, workplace safety and hostile attitudes result in many women opting out of full-time employment.

“It is imperative to acknowledge that we have a crisis at hand, and we then work towards female empowerment to help India realise its full economic potential,” says Rustagi.