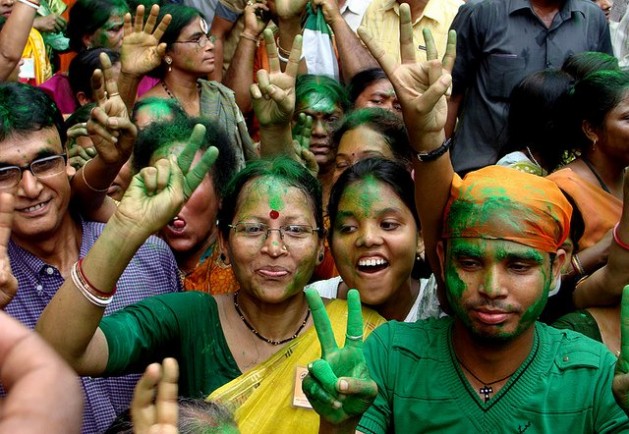 NEW DELHI, Jun 29 2014 (IPS) - National outrage over women’s security in India – or the lack of it – is nothing new. From the gang rape of a young girl on a Delhi bus two years ago, to the recent rapes and lynching of two teenage cousins in the northern state of Uttar Pradesh, gender-based violence has claimed headlines.

But as the country emerges from the fanfare of national elections with a new prime minister – Narendra Modi of the Bharatiya Janata Party (BJP) – the debate that is currently roiling the country is whether such tragedies – and apathy within the political class – would continue were there more women representatives in parliament?

Articulating a list of government priorities earlier this month, President Pranab Mukherjee included a strong commitment to ensuring 33 percent representation of women in the parliament, as well as state assemblies.

Passage of the Women’s Reservation Bill – which proposes to reserve a third of the seats in the Lok Sabha (lower house) and in all legislative assemblies for women – could be instrumental in sending out a powerful message of women’s empowerment, say experts here.

“There needs to be a critical mass of women out there to put women’s issues on the political agenda." -- Pratibha Pande, former professor at the Delhi University
The proposed Bill – cleared by the upper house (Rajya Sabha) in 2010 and now awaiting only a nod from the Lok Sabha, as well as the newly elected Modi – symbolises a crucial first step towards necessary electoral and parliamentary reforms.

The principle of gender equality is enshrined in the Indian constitution, and the country has also ratified various international conventions and human rights instruments to secure the equal rights of women; key among them is the Convention on the Elimination of All Forms of Discrimination Against Women (CEDAW), ratified in 1993.

Despite these promises on paper, actual representation in what is dubbed ‘the world’s largest democracy’ remains low: currently, there are only 61 women out of a total of 543 MPs that make up the lower house of parliament.

Even though women form close to half of the population of 1.2 billion, they are underrepresented in all political positions. This was reflected in the recent elections, during which only 632 women ran for office, compared to 7,527 men.

“However, if a third of the parliamentarians in India are women, a system of checks and balances will organically be kicked in to ensure enhanced vigilance from authorities in cases of rape and a skewed sex ratio, which is rampant across the country,” she asserted.

Indeed, the last few decades have seen a continuously declining female ratio in the population. Male children are still preferred, and though prenatal sex determination was banned in 1996, the United Nations Children Fund (UNICEF) estimates that 50 million women are “missing” in India as a result of female foeticide and infanticide.

Those girl children who survive this mindset tend to be given poorer care than boys.

The patriarchal attitude is so deeply entrenched across the country that, according to the 2011 census, India now has 37 million fewer women than men (586.5 million women to 623.7 million men).

The country’s literacy rate is also skewed in favour of men. Compared to a 76 percent literacy rate among men, only 54 percent of women can read or write, which further limits their opportunities to enter the political fray.

During the recent election campaign, many political parties – including the right-wing Hindu nationalist BJP, which succeeded in ending the Congress Party’s decade-long reign – expressed a desire to strengthen women-friendly laws and address the stubborn gender imbalance that pervades the country’s political arena.

However, neither party fielded more than a handful of women candidates, who were perceived by many as being mere ‘tokens’ in the process.

According to a recent paper by Carole Spary, a professor at the UK-based University of York, political parties in India tend to see women as less likely to win elections than men, and therefore prefer not to take risks with seats they could conceivably win.

This perceived ‘winnability’ factor based on gender is very strong across the country, experts say.

Amitabh Kumar of the Delhi-based Centre for Social Research, who has for years been spearheading a campaign for the passage of the Women’s Reservation Bill, told IPS that despite six decades of independence, a deeply misogynistic attitude scuppers women’s ability to enter politics and impact policy making.

“Even capable women who have demonstrated excellent administrative and leadership qualities find it tough to mobilise funds for contesting elections,” Kumar added.

In order to contest an MP’s seat today, a candidate requires at least five million dollars. “How many Indian women can muster such funds?” he asked.

The Rajya Sabha does not fare much better, with 27 women members comprising 11.5 percent of the total membership in 2013, far below the world average of 19.6 percent.

Analysts say women’s representation in parliament is imperative not only on the grounds of social justice and legitimacy of the political system, but also because a higher number of women in public office, articulating interests and seen to be wielding power, will strike at the roots of gender hierarchy in public life.

“Without being sufficiently visible, a group’s ability to influence either policy-making, or indeed the political culture framing the representative system, is limited,” according to Pande.

“There needs to be a critical mass of women out there to put women’s issues on the political agenda,” he added.

In the medium-term, states the study, the introduction of the Women’s Reservation Bill at the local level also leads to a significant increase in the reporting of crimes.

Other experts, like Lakshmi Iyer, an associate professor at the Harvard Business School, say that electing more women to political office leads to improvements in women’s education and reductions in infant mortality, among other issues.

The fact that women make up nearly 25 percent of the newly sworn-in cabinet augurs well for the women’s movement.

This is the first time India has had seven women ministers, with six of them landing plum cabinet posts. The development is sparking hopes that the country will take bigger steps towards correcting its gender imbalance in politics.