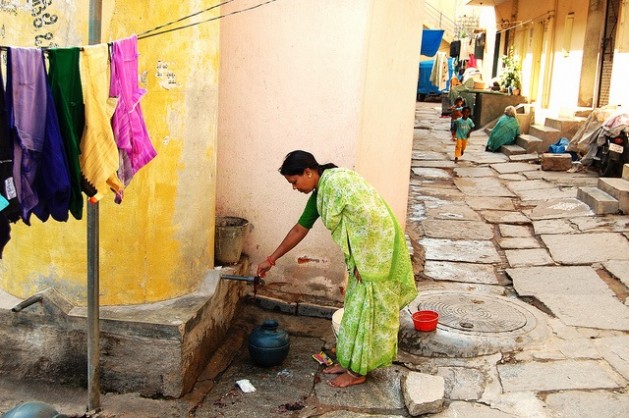 Millions of Indian women are confined to their homes performing domestic duties for which they receive no compensation. Credit: Malini Shankar/IPS

NEW DELHI, Jul 17 2014 (IPS) - According to census data released this month, a whopping 160 million women in India, 88 percent of who are of working age (15 to 59 years), are confined to their homes performing ‘household duties’ rather than gainfully employed in the formal job sector.

Dubbed India’s ‘great invisible workforce’, this demographic is primarily involved in rearing families within the four walls of their homes.

This asymmetry in the workforce, experts say, reflects illiberal economic policies as well as complex social dynamics, which scupper the chances of women in the world’s so-called ‘largest democracy’ to realise their full income-generating potential.

The odds are heavily stacked against women in this vast country of 1.2 billion. Though more women are going out to work, India primarily remains a nation of stay-at-home wives who play a pivotal role in keeping families together in a country with virtually no government-aided social security.

Small wonder, then, that India ranks an abysmal 101st in a 136-nation survey titled ‘The Global Gender Gap Report’, released by the World Economic Forum in 2013, which tracks international progress in bridging the gender gap worldwide.

“Policy makers should encourage women’s participation in powering the growth of Asia’s third largest economy, which can have a multiplier effect in eradicating poverty and illiteracy.” -- Aditi Parikh, a Mumbai-based demographer and sociologist
The index measures the “relative gaps between women and men” across countries in four key areas – health, education, economics and politics. With so many million women out of the workforce, India’s overall ranking reflects lopsided government policies that are failing to harness the full potential of a key demographic.

“The stay-at-home woman syndrome is a shocking loss to the country as well as to the women themselves,” says Aditi Parikh, a Mumbai-based demographer and sociologist.

“Policy makers should encourage women’s participation in powering the growth of Asia’s third largest economy, which can have a multiplier effect in eradicating poverty and illiteracy.”

Even though women achievers have earned admiration and respect in Indian society, gender-stereotyping results in most women facing a clash between work and family life, especially when they have to prioritise one over the other.

Despite a boom in the education sector, Indian women also remain less educated than men even though they make up nearly half the population.

The literacy rate for Indian women hovers at around 65 percent as per the 2011 census, compared to over 82 percent literacy among men.

This is an overwhelming reason for Indian women’s unemployment, say analysts.

Most Indian women comprise part of the country’s sprawling ‘informal’ sector‘, defined by the absence of decent working conditions as specified by the International Labour Organisation (ILO), lax labour laws and insufficient or insecure wages.

According to a 2011 ILO report, 83.8 percent of South Asian women are engaged in so-called ‘vulnerable employment’ that can in most cases be defined as casual labour or sporadic employment such as the manufacturing of garments and other handmade items produced within the worker’s own home.

Indian women workers represent a considerable share of this segment, which has expanded substantially over the last 20 years, researchers say.

While the percentage of women employed in the informal economy remains high, the number of Indian women engaged in formal, secure and recognised labour is still minimal. Only 14-15 percent of workers in the formal sector are women, a number that has remained stagnant for several years.

India also lags far behind the world’s average when it comes to female representation in management, with women occupying a miserable two to three percent of administrative and managerial positions nationwide.

According to Dr. Manasi Mishra, head of research at the Centre for Social Research (CSR), a New Delhi-based think tank, “Indian women usually tend to drop out at mid-career-level positions as they prioritise personal commitments and find it difficult to balance organisational demands, career aspirations and family commitments.”

Also, despite valiant efforts to build gender diversity in the workplace, corporate India still has less than five percent of women at top management and board levels. Only 50 percent of the women who graduate from business schools enter the workforce, says a CSR survey entitled ‘Women Managers In India – Challenges & Opportunities’.

The persistence of an invisible glass ceiling in the workplace and the prevalence of stereotyped gender roles also contribute to lower representation of women in higher-level positions, Mishra says.

“Society and organisations should work in synergy to prevent [women from dropping out] on the journey from education to employment,” she stressed.

Unfortunately, the problem is not specific to India. According to Ernst & Young’s 2013 Worldwide Index of Women as Public Sector Leaders, women make up about 48 percent of the overall public sector workforce, but represent less than 20 percent of public sector leadership across the G20 countries the consulting firm studied.

Diversity, according to the index, is crucial to delivering more effective governance and increased economic competitiveness.

Ernst & Young also found that the ratios of women in leadership roles vary widely. Over half of Germany’s public sector workforce is female (52 percent), but only 15 percent of women have leadership positions.

In Japan, the world’s third-largest economy, women make up 42 percent of the public sector workforce, but only three percent are leaders.

Russia, with the highest number of women represented across the public sector (71 percent), has just 13 percent female representation in leadership roles.

Here too, India languishes at the bottom of the pyramid with only 7.7 percent of its public sector leaders being female.

Experts say there is an urgent need for gender-sensitisation.

“The precondition for any effective social security policy aimed at women,” explains Amitabh Kumar, head of the media and communications division at CSR, “is the provision of economic security through ownership rights, and the securing of women’s right to resources such as land, housing, energy and technology.

“As long as the State takes no effective measures to ensure these very basic rights for women, we can’t expect even those social security policies aimed at women to have any effect.”

For the time being, it appears that India’s great invisible workforce will remain in the shadows until the government makes a determined effort to bring these women into the light.