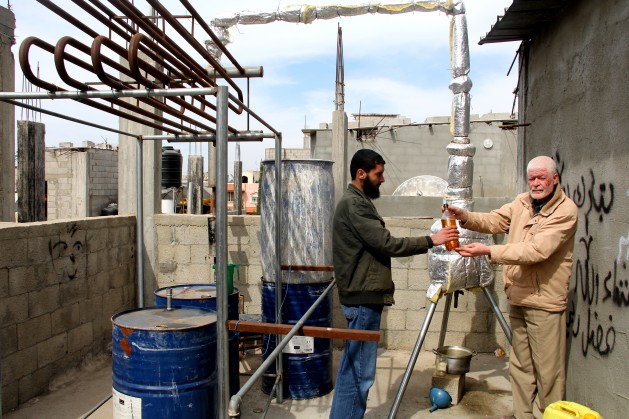 Ibrahim Sobeh and his son Mahmud with the device they built for domestic fuel production. Credit: Khaled Alashqar/IPS.

GAZA CITY , May 7 2014 (IPS) - On the roof of a modest house amidst the alleys of Nusseirat refugee camp in central Gaza Strip, Ibrahim Sobeh and his sons spent more than 200 days working on a primitive device that converts waste plastic into fuel.

“The idea came when I watched smoke emissions from a fireplace I made in my house,” Sobeh tells IPS. “I thought how to exploit these fumes and vapours. That prompted me to search online to find there were already attempts in America to exploit fumes emitted by burning hay to produce fuel, and this was the start.”

In harsh conditions where survival is a struggle, not many are thinking of the environment, or even of long-term damage to their health.

Fifty-six-year-old Sobeh, who got a diploma in electricity from the United Nations Works and Relief Agency (UNRWA) Institute in Gaza 30 years ago, tells IPS how he faced considerable difficulties because of lack of raw materials. And, he had to borrow money from a friend.

“Fuel in Gaza is extremely expensive and it is not available on a regular basis as a result of the blockade imposed on Gaza,” says Sobeh. “This is precisely what prompted me to look for a way to produce fuel domestically, which finally succeeded. But the project requires substantial financial support for its development.”

The device exposes plastic waste composed of oil molecules to high temperature in an Oxygen-free airtight box leading to degradation of the constituent particles of plastic into vapours. These are then passed through metal channels where the fumes are cooled. This results in liquid fuel somewhere between gasoline, diesel and kerosene.

“We produce one litre of fuel from 1.5 kg of plastic waste,” son Mahmud Sobeh tells IPS. “Diesel-run electrical and mechanical machines were successfully run on this fuel output. We have sent samples to the laboratories of the Islamic University of Gaza for scientific examination.”

These are desperate measures, and energy expensive in breaking down the plastic. But then Gazans are in a desperate situation.

The fuel crisis in Gaza has been ongoing for eight years now as Israel controls the amount of fuel entering Gaza through the Abu Salim crossing between Gaza and Israel. Gaza’s only power plant also runs on scarce diesel. Blackouts that last hours are a daily feature.

A litre of Israeli gasoline costs seven shekels (two dollars). A litre of fuel smuggled from Egypt cost half as much before the Egyptian army demolished the tunnels between North Sinai and the southern town Rafah after the dismissal of former Egyptian president Mohammed Morsi. This exacerbated the electricity and fuel crisis in Gaza.

Dr. Sameer Afifi, director of the centre for environmental studies and scientific laboratories at the Islamic University of Gaza tells IPS that the Sobehs’ project “was conducted under primitive conditions and the quality may therefore be not quite good. But still it is promising.”

The incomplete combustion of plastic may result in release of other hydrocarbons that are hazardous, some of them carcinogenic. “Any material that is not fully combusted results in production of fumes and dangerous substances,” Abu Safieh tells IPS.

But citizens in Gaza still look at such attempts with hope. “Ordinary fuel is not readily available due to high prices, and this makes us look for locally produced fuel that helps us to overcome the energy crisis and relieve us of an economic burden,” Shadi Abu Samra, 35, from Al-Shati refugee camp tells IPS.

The Sobeh experiment is now driving others to look at such measures to produce fuel. In harsh conditions where survival is a struggle, not many are thinking of the environment, or even of long-term damage to their health.