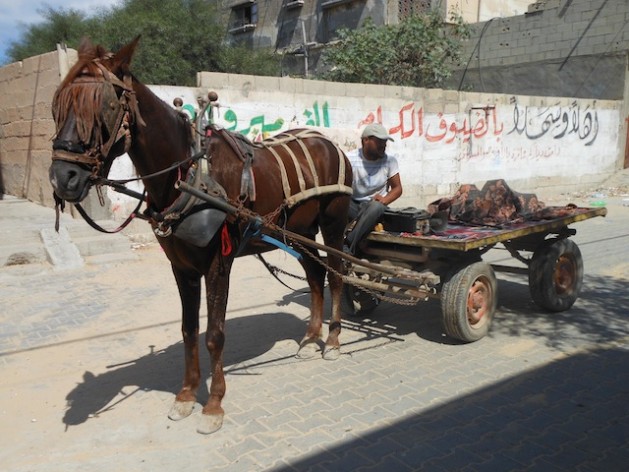 Selling yoghurt in Gaza in an attempt to make some sort of living. Credit: Eva Bartlett/IPS.

GAZA CITY, Sep 30 2012 (IPS) - “The overwhelming majority of people we work with tell us, ‘We don’t want the aid, we want to have an opportunity to work and earn money’. Especially people who had a decent job but lost it in the last many years: before asking for any aid, they ask for a job.”

In his work as Gaza-based communications officer with Oxfam GB, Karl Schembri interacts on a regular basis with some of Gaza’s most impoverished Palestinians, poverty he says is avoidable.

“Gaza cannot be called a humanitarian situation, it’s all man-made. It’s a situation of de-development, where the infrastructure and knowhow was there and development was occurring,” he tells IPS, referring to the years before 2006 when, after Hamas was democratically elected, Israel imposed its suffocating closure of the Gaza Strip.

“Despite the Israeli occupation, Gaza’s economy was somehow on its feet…until they were banned from exporting. The biggest natural market for Gaza, the West Bank and Israel, is now out of bounds, as are regional markets like Jordan.”

In its August 2012 report, ‘Gaza in 2020: A Liveable Place?’ the United Nations (UN) draws the same conclusion. “One of the main reasons for the economy’s inability to recover to pre-2000 levels has been and is the blockade of the Gaza Strip,” says the report.

Banned from exporting anything, including agricultural goods, furniture, textiles, and food products, the vast majority of Gaza’s factories have shut down, affecting the hundreds of thousands of Palestinians formerly employed there.

“Gaza’s economy was utterly destroyed during the 2008-2009 Israeli war on Gaza, including 95 percent of factories and businesses,” says Khalil Shaheen, director of economic and social rights for the Palestinian Centre for Human Rights (PCHR).

“Under Israel’s illegal closure of Gaza, the total ban on raw materials has impaired the ability of these factories to operate again,” Shaheen tells IPS. Roughly 80 percent remain closed, or are scarcely operating.

“The fishing community has been completely affected by the daily Israeli navy attacks and by being denied access to the sea,” he says, noting that Palestinian fishers are forced by Israel’s unilateral decision to fish within three miles of Gaza’s coast.

“But fishers are attacked even within 400 metres from the shore,” Shaheen says. “The Israelis are trying to prevent all Palestinian fishers from fishing in Gazan waters.”

A September 2012 UN report cites the unemployment rate “for refugee youth in Gaza at 59 percent,” a staggering statistic foretelling that the dramatic unemployment levels will not decrease any time soon.

“Soaring unemployment is a result of systematic Israeli policies, including completely denying the Gaza labour force from the Israeli market,” says Shaheen. Palestinian labourers formerly worked in Israeli construction and labour, he says. “Palestinian workers were highly skilled in all aspects of construction.”

Jaber, father of six children, is out of farm labour, work in Israel, and any of the potential fields he is skilled at working in. “Ten years ago I worked in Israel, as a mechanic, on farms, in construction, various jobs. Since the borders closed, I haven’t had solid work, I’ve only done odd jobs but that doesn’t suffice to care for my children.”

The few jobs that remain in Gaza under siege are some of the most dangerous.

“Even though it’s dangerous work, the tunnels are a source income for unemployed workers and their families,” says PCHR’s Shaheen. “But the average daily wage has dropped from 100 or more dollars to about ten dollars.”

The risks for such a pittance are enormous. According to medics, since 2006 more than 160 Palestinians have died while working in tunnels.

“The majority were killed and injured by Israeli bombings of the tunnels, or tunnel collapse and consequent suffocation, or electrocution,” says Shaheen.

In the past two months, Egyptian authorities have been destroying and closing tunnels. Shaheen estimates that at least 150 tunnels have been totally destroyed, and another 150 shut down. “Forty thousand used to work in the tunnels. Now its 5,000 at best,” he says.

“Even children help contribute to their families’ income,” says Shaheen. “All over the Gaza Strip children are in the street trying to sell chocolates, gum, and trinkets.”

Worse, they are gathering the rubble of destroyed homes in Gaza’s border regions, risking Israeli army fire. “Tens of children have been injured when Israeli soldiers targeted them while they were trying to collect rubble in border areas for resale in construction.”

From Mar. 26, 2010 to Dec. 27, 2011 alone, Defence for Children International documented “30 cases of children shot whilst collecting building material or working near the border fence.”

“What we’ve seen in the last five years is the emergence of a new class of poor: people who were working in Israel or even in factories here, becoming jobless overnight. They had nice, decent houses and all of a sudden had no income. This was a huge blow to their dignity and sense of purpose.”

The self-immolation of a young man from Gaza’s Beach Camp earlier in September 2012 brought to light the less-discussed issue of suicide, formerly uncommon in the predominantly Muslim Gaza Strip.

“Suicide here is a sign that Palestinians in Gaza are living with very little hope and few opportunities to build towards a better future,” says Shaheen.

“There is only one solution to the unemployment problem: end the illegal closure of the Gaza Strip. And end the shameful international conspiracy of silence which offers impunity for Israel’s illegal actions.”