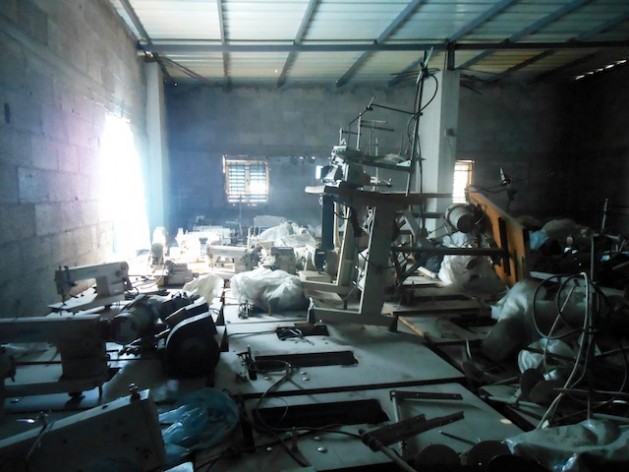 What was once Rizk Al-Madhoun's clothing factory. Credit: Eva Bartlett/IPS.

“We started in 1993 with seven sewing machines. By 2005 we had 250 machines and as many tailors,” he says. “In 2006, after Hamas was elected and Israel sealed the borders, we had to close down half of the factory. We stopped all production in 2007, when Israel tightened the siege.”

Madhoun’s is one of the 97 percent of industrial establishments in the Gaza Strip which by 2008 had stopped production as a result of the Israeli-led, internationally-complicit closure of Gaza’s borders that limited imports and virtually halted all exports. By December 2007, the UN had already reported that only one percent of Gaza’s 960 garment factories remained open.

Today, a reported 80 percent of factories in Gaza are still closed or operating at minimum capability.

“Until 2005, our work was good,” says Madhoun. “We made shirts, pants, jeans, dresses, skirts, school clothes…we’d make whatever was in demand. Since our clothes were high quality, 80 percent were exported to Israeli markets, and some of these were then exported to European markets.

His workers were, Madhoun says, among 40,000 who worked as tailors in Gaza.

“Before our factory closed, I employed 250 high-quality tailors, as well as another 100 who worked from home. Another 50 families worked from home, doing the final touches and finishing work.”

A tour through the vast warehouse that was Madhoun’s factory reveals much now-unused space, with a few rooms devoted to storing cheap imported clothing.

“Now we just have a large storage area. There’s no way we can run our factory, so instead we sell these imports in Gaza markets.”

Focusing on Gaza’s siege-devasted economy, the UN in June 2012 noted that “the continued ban on the transfer of goods from Gaza to its traditional markets in the West Bank and Israel, along with the severe restrictions on access to agricultural land and fishing waters, prevents sustainable growth and perpetuates the high levels of unemployment, food insecurity and aid dependency.”

Israeli-rights group Gisha notes that 85 percent of Gaza’s exports traditionally went to Israeli and Palestinian markets outside of Gaza. Gisha further notes that any claims of security precautions being the reason for prohibiting exports from Gaza hold no weight: “Recently a new scanner for screening goods was installed at the crossing,” wrote Gisha in June 2012. It said that Israeli military officials “have said that the choice to prevent sale of goods from Gaza in Israel and the West Bank was made at the political echelon and needs to be decided upon there.”

The Palestinian Centre for Human Rights reports that the amount of exports allowed to leave Gaza in March 2012 were “1.28 percent of pre-closure numbers,” with April exports at “0.85 percent of the preclosure numbers.”

Gaza’s unemployment rates continue to hover at between 35 percent to 65 percent (adults versus those in their early twenties), and food-aid dependency remains at 80 percent.

“An urban area cannot survive without being connected,” the UN’s Maxwell Gaylard stated on Aug. 27, reiterating the necessity to reopen Gaza’s closed borders to trade.

“The area has been essentially isolated since 2005,” reads the UN press release, “meaning that, in the longer term, its economy is fundamentally unviable under present circumstances. Gaza is currently kept alive through external funding and the illegal tunnel economy.”

The United Nations’ August report finishes by insisting that, among other things, the Palestinians of Gaza “must have ready access to the world beyond Gaza for religious, educational, medical, cultural, commercial and other purposes.”

“Since we have so few options for work, Gaza’s tailors have perfected their crafts,” Madhoun says. “We can make clothes as good and better quality than the Turkish imports we get, but without a market, there is no point in producing goods.”