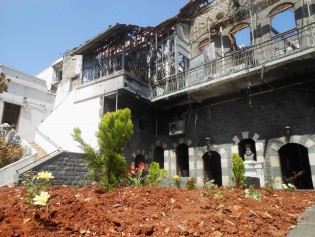 By Eva Bartlett
On Nov. 17, four days into Israel’s eight-day assault on the Gaza Strip, deputy Israeli Prime Minister Eli Yishai publicly called for the Israeli army to “blow Gaza back to the Middle Ages, destroying all the infrastructure including roads and water”.

By Eva Bartlett
It’s being taken as an antidote to the stresses of Occupation. But the prevalence of the painkiller Tramadol in the Gaza Strip has more to do with its ease of availability than its singular effectiveness as a reality-numbing substance.

By Eva Bartlett
The car's engine revs, wheels spinning in vain, as it sinks deeper into the sandy lane near Rafah, southern Gaza. Members of the Palestinian Paralympic Committee (PPC) are en route to welcome Palestine's two Paralympic contenders, Mohammed Fanouna and Khamis Zaqut, home from the 2012 London Paralympic Games.

By Eva Bartlett
"Gaza's economy is expected to grow modestly and people will likely still be worse off in 2015 compared to the mid-1990s," reads a press release announcing the United Nations' August 2012 report, ‘Gaza in 2020 – A Liveable Place?’

MIDEAST: The Olive Branch Fights Back

By Eva Bartlett
"During hard times, we have survived off olive oil," says Ahmed Sourani from the Palestinian Agricultural Relief Committee. "During the last war many people who couldn’t leave their homes had only bread and olive oil to sustain them for long periods."
Next Page »
ADVERTISEMENT ADVERTISEMENT