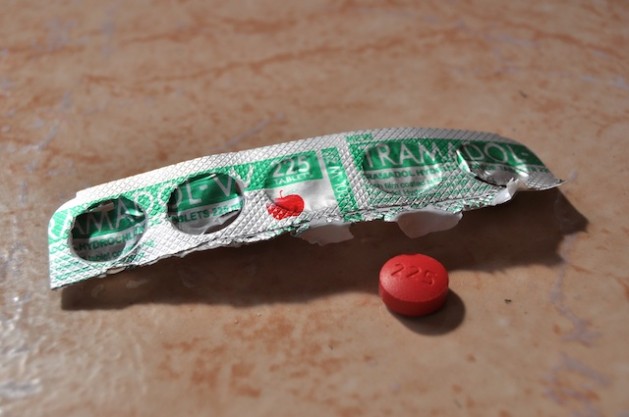 Tramadol pills have become dangerously popular in Gaza as an antidote to the stresses of Israeli occupation. Credit: Emad Badwan/IPS.

GAZA CITY, Oct 21 2012 (IPS) - It’s being taken as an antidote to the stresses of Occupation. But the prevalence of the painkiller Tramadol in the Gaza Strip has more to do with its ease of availability than its singular effectiveness as a reality-numbing substance.

Under siege since early 2006, means of relaxation are scarce, and even some of the most resilient and educated people in the Strip have sought in Tramadol a break from the dire realities of trauma, manufactured poverty and continual stress.

“Every week, we get three or four overdose cases, most of them young men,” says Abu Yousef, 34, a paramedic for over ten years. “Patients are sweaty, delirious, are vomiting, have abdominal pain, and may be hallucinating…it’s morphine after all, it has many side effects.”

Although never addicted, he himself took prescription Tramadol after his release from years in Israeli prisons. “I was taking tramadol for abdominal pain after I was released. But I stopped taking it, I take an analgesic now,” he says.

But the vast majority of users these days are not taking the pill on doctors’ advice. “Some people feel it makes them strong, gives them power. Even some medics take it now and then, because they work long shifts. Tunnel workers are more prone to taking it regularly. But for them it’s about maintaining stamina, not about getting numb.”

Dr. Hossam Al Khatib, 28, specialises in addictions. In his work helping addicts break their habits, he sees a variety of backgrounds and reasons for taking the drug.

“Most want to forget their problems, and Tramadol helps with this, temporarily,” he says. “There is high unemployment among youths and adults in Gaza, so in the past six years, even more people have started using Tramadol, including recent university graduates who a year or years after graduating haven’t found work.”

Although he says there was a substantial increase in drug usage after the trauma of the 2008-2009 Israeli war on Gaza, Khatib cites the complete closure of the Gaza Strip as the primary reason for current high levels drug usage. “The siege causes all of the problems: high unemployment, hopelessness, stress, anxiety, depression. Even some youths 15 years and older, take it because their lives are so difficult.”

With the pills sold cheaply on the streets of Gaza, starting to take and becoming addicted to the pills is easier for Gaza’s youths than other more expensive, less available, hard drugs.

Khatib explians that drugs and marijuana have been present in Gaza since long before 2006 and the imposition of the Israeli-led siege on Gaza. “But people weren’t using Tramadol and drugs as an escape mechanism, not like now. It really is a product of the siege.”

The causes of usage are deeper than mere joblessness and frustration, Khatib says. “The situation in Gaza is causing a change in Palestinian society, leading to more problems in the family. For example, a son whose younger brother has work but he himself doesn’t. He feels ashamed at not being able to contribute to the family, or to provide for his own wife and children.”

Young men of marrying age who cannot afford the cost of a wedding and married life are also increasingly at risk of developing Tramadol or other addictions, as a temporary relief from their shame and misery, Dr. Khatib notes.

While he says some are merely casual users, in Khatib’s experience roughly 20 percent are chronic users. “Addicts,” he says.

Both Khatib and Abu Yousef say the majority of drugs enter via the tunnels from Egypt, the lifelines of Gaza which have brought in foods, livestock, agricultural and fishing needs, and virtually everything banned by Israel under its years-long closure of Gaza’s borders.

“Due to the widespread poverty in Egypt, many Egyptians make Tramadol at home, to sell. Some is a mix of morphine and mouse poison,” says Abu Yousef. “Poison is an excitant, it stimulates the brain to produce serotonin, as does Tramadol. The poison itself is not addictive, but in high doses or repeated usage it can kill.”

As with most addictions, the irony in Tramadol use is that it not only does not solve the root problems for which users seek it out, but actually compounds them, says Khatib.

“Normal after-effects and withdrawal symptoms are depression, anxiety, insomnia, hopelessness, and remorse at having taken the drug. With chronic addicts, there may be loss in coordination, sexual problems and even sterility.”

Recognising most Tramadol addicts as faultily seeking a solution to their psychological state, Khatib stresses the importance of counseling once users have stopped taking the pill. “We try to make them feel important and hopeful, and encourage them to socialize, not to remain withdrawn from friends and their community.”

Unemployment being one of the key initial stressors, Khatib’s clinic tries to help ex-addicts find work “and encourage them to be patient in their job search, not to give up or give in to despondence.”

The root problems do vary, he says, but as with many of Gaza’s current problems, the solution is painfully clear: “If the borders were opened, the siege lifted, work available again, people here wouldn’t feel hopeless, wouldn’t feel the need to take drugs like Tramadol,” says Dr. Khatib.