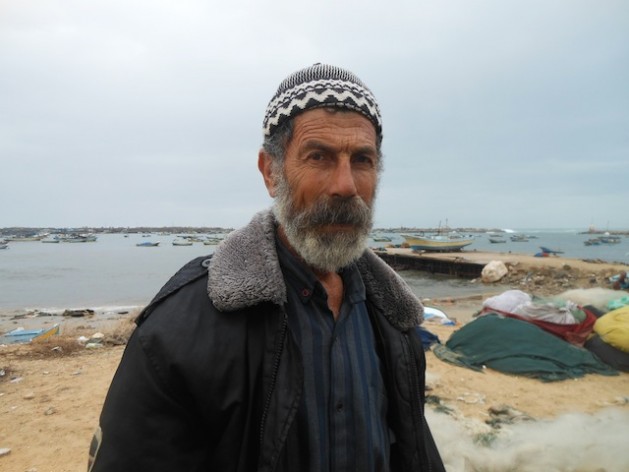 Mohammed Baker (70) has been fishing for half a century. He remembers the days when Palestinian fishers could go out to sea without fear of being attacked, arrested or killed. Credit: Eva Bartlett/IPS

The Palestinian Centre for Human Rights (PCHR) reported that fourteen fishers from a single family, stationed just three nautical miles from the coast of the Gaza Strip, were all arrested on Dec. 1.

Some fishers were only two miles off Gaza’s coast when they were attacked with machine gun fire and arrested by the Israeli Navy. Ranging from the ages of 14 to 52, the majority in their late teens and early twenties, these fishers hail from some of Gaza’s poorest families.

According to Mifleh Abu Riyala, a representative of the General Syndicate of Marine Fishers, the ceasefire has made no difference to Palestinian fishers.

Palestinians are allowed, under the current Israel-Hamas ceasefire, “to fish six miles out”, he told IPS, “but the Israeli gunboats still attack us, whether we are six or three miles out.”

The Oslo accords granted Palestinian fishers the right to fish twenty nautical miles out at sea, a right the Israeli navy has unilaterally vetoed, downsizing the fishing “limits” since the 1990s to a mere three miles, until this past November’s ceasefire allowed a slight increase, to six nautical miles.

“But there are no fish at six miles, the sea floor is still sandy. It is only after seven miles out that the sea floor becomes rocky and the fish are plentiful,” Abu Riyala stressed.

“It is our sea, in order to live we must be able to access it.”

Mohammed Baker (70) has been fishing for half a century. He remembers the days when Gaza’s sea was open to Palestinian fishers, and when there was no fear of being attacked, arrested or killed by the Israeli navy.

Two of his sons, Amar (34) and Omar (21), were among the 14 fishers attacked by Israeli gunboats on Dec 1. The Israeli navy has still not returned their “hassaka” (a small fishing boat).

Like many of Gaza City’s fishers, the Bakers live in the Beach Camp, one of the Strip’s most overcrowded refugee camps.

Amar, married with six children, was still being held by Israeli authorities on Dec. 5 when his father, Mohammed, recounted the events of that fateful day to IPS.

“Israeli gunboats and smaller zodiacs surrounded my sons’ hassaka and made them strip naked, jump into the sea, and swim to one of the Israeli boats,” Mohammed told IPS.

“They put a bag on Amar’s head and took him to Ashdod. Amar has asthma, I’m very worried about his health.” Mohammed has still not been able to speak with his son.

“They told me Amar is forbidden from talking with anyone. He is under interrogation,” Mohammed said.

Amar now stands accused of “being part of the Palestinian resistance”, a charge based on his previous job of making coffee and tea for Hamas officers.

“My son was a ‘kitchen boy’. People who work for the government are still civilians,” Mohammed stressed, echoing the tenets of international humanitarian law.

Stripped of their only boat and a member of their family, the Bakers face even more dire circumstances than ever.

“There is no ceasefire for fishers. We’re ordinary people, we work to earn just 30 or 40 shekels (seven to 10 dollars) per day to feed our families,” Mohammed lamented.

Khadr Baker (20) was lucky that he was not killed during an encounter with the Israeli navy on Nov. 28, during which his boat was gunned down as punishment for fishing just over three miles from the Beach Camp coast.

“The Israelis ordered the four fishers on Khadr’s hassaka to strip and jump into the sea, which is extremely cold this time of year,” Jamal told IPS.

“They made Khadr tread water for half an hour, and kept machine gunning around him,” said Jamal. The hassaka eventually caught fire and exploded, sinking soon after.

“The Israelis took Khadr on their boat, handcuffed him naked, and beat and interrogated him for three hours, accusing him of working with the Palestinian resistance,” the boy’s father told IPS.

Without their boat, the family of ten has no income. “I sold my nets so that we can eat,” Jamal said simply.

PCHR reported other attacks on fishers that day: in one case, the navy attacked and abducted five fishers from the al-Hessi family, damaging – and eventually confiscating – the large fishing trawler they were on. The boat has not yet been returned.

In February 2009, Rafiq Abu Riyala, then 23, was shot in his back – by an Israeli soldier standing less than 20 metres away – with a dum-dum bullet, which explodes on impact.

The hassaka fisher was only two miles off Gaza’s coast when attacked. One of two breadwinners in his family, Rafiq Abu Riyala cannot now fish in cold weather. “The shrapnel bits in my back make it too painful when it is cold out,” he told IPS.