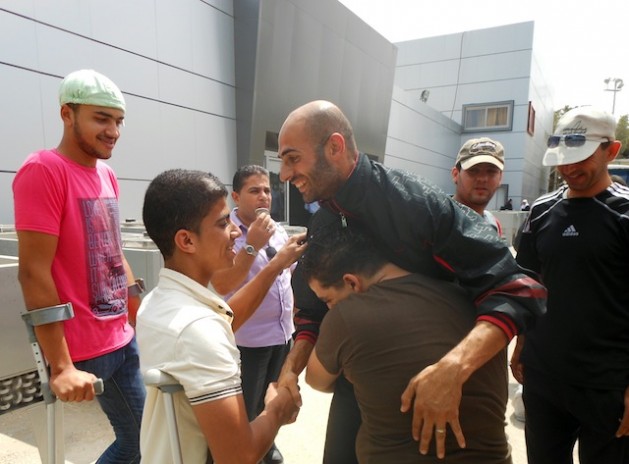 Mohammed Fanouna is welcomed back proudly at the Rafah crossing after the Paralympics. Credit: Eva Bartlett/IPS.

Zaqut and Fanouna, both repeat medal winners in prior Paralympic, Arab, and Asian Games, came fourth and ninth respectively in their events in London 2012.

According to Ala’a Shatali, general secretary of the PPC, the two Olympians should be proud of their ranking in light of the various obstacles facing athletes in Gaza.

“We don’t have adequate training facilities or equipment in Gaza,” he says. “But our athletes are extremely motivated, and try to overcome the lack of opportunities.”

Difficulties with transportation, uniforms, and registration fees are also in the way of Gaza’s athletes meeting international standards.

“We don’t have the money to pay their costs, let alone give them a stipend. Ideally, we’d pay for their airfares and their participation in international competitions,” says Shatali. “We can’t even provide them with specialised cars for the disabled.” Wheelchair-bound Zaqut cannot always make the trip from Khan Younis to Gaza City’s meagre training grounds, he says.

Not participating in international events has a bearing on their performance at the Paralympic Games. It also hinders personal growth, says Shatali. “Training only in Gaza isn’t sufficient for athletes to reach international standards of excellence.”

While some of Gaza’s 298 registered disabled athletes were born with their disability, others like Khamis Zaqut—injured in a work-related accident two decades ago – became disabled later in life.

“For many, competing is part of the rehabilitation stage,” says Shatali, also a physical therapist. “Some of our athletes were injured by Israeli army attacks, some by road or other accidents. After they’ve gone through physiotherapy, competing in sports can be very empowering for them.”

As for the diet, they eat like any average Gazan Palestinian: “Rice, lentils, pasta…they don’t have any special supplements.”

Only two disabled athletes went to the London Games, but Hossam Azzam, also wheelchair-bound, believed until June that he too was competing.

“Like the others, Hossam qualified in standard A, among the best athletes in the world,” says Ala’a Shatali. “But the International Paralympic Committee had 682 athletes more than they wanted, so in the end Hossam didn’t meet the raised standards.”

Dealing with virtually no budget and heavy constraints on training facilities, Gaza’s coaches and PPC members have chosen to focus on certain sports more than others.

“We coach them in shot put, javelin, discus, long jump and 200 metre sprint,” says Shatali. “There are athletes who practise wheelchair basketball and volleyball, but realistically we cannot afford to send a whole team to competitions. If athletes have more than one skill, they have more options for success.”

Nor can Gaza’s swimmers participate.

“The best pool we have is half the size of an Olympic pool. It isn’t large enough to train properly, there would be differences in power and techniques.”

Partially-blind Mohammed Fanouna, who competed in Athens and Beijing Paralympic games, runs 200 metres “because we don’t have the means to train him on tracks longer than that.”

While none qualified for the 2012 Paralympics, female disabled athletes in Gaza also train for international competitions. According to Shalati, Fatema Al Halouli took fourth place at the 2011 Arab Games.

Also among Gaza’s disabled athletes, a number of youths already have medals to their names.

“We sent nine youths under 18 to Tokyo to participate in 10th Asian Youth Paralympic Games. Even though most had never travelled or participated internationally before, we won eight medals.”

In the reception hall at the Rafah crossing, colleagues and supporters listen as Khamis Zaqut speaks of his and Fanouna’s achievements at the 2012 Games.

“We are proud that we got to the Paralympics,” he said, “especially since we constantly face difficulties under the Israeli occupation and siege.”

Ali Nesli, head of Palestinian Federation of Disabled Athletes and media coordinator of the PPC reiterated, “Under the Israeli occupation and siege, we are deprived of the human rights and dignities accorded under international law. Our infrastructure is insufficient for meeting Olympic standards, and our athletes are limited in what sports they can participate in.”

For Ala’a Shatali, proud of Gaza’s two Paralympic athletes, overcoming the challenges sends a message to the world. “Palestinians can do much more than people might imagine. The Israeli occupation will never erase Palestinian existence, nor even deprive us from participating in sports.”