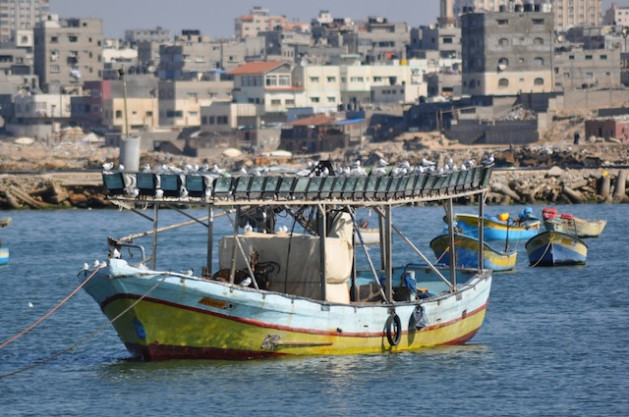 GAZA CITY, Mar 27 2013 (IPS) - “An ark is literally a large floating vessel designed to keep its passengers and cargo safe,” say the group preparing ‘Gaza’s Ark’. But their ark, they say, is “a vessel that embodies hope that the Palestinians of the Gaza Strip can soon live in peace without the threat of the Israeli blockade.”

An initiative by Palestinians in Gaza and international solidarity activists, Gaza’s Ark entails “purchasing a run-down boat from a local fishing family,” says Michael Coleman, a member of Free Gaza Australia and on the Gaza’s Ark steering committee.

“The refurbishing will be done by Palestinians in the port of Gaza, and the sailing will be with a mixed crew of Palestinians and internationals,” says David Heap, spokesperson for Gaza’s Ark in Canada and Europe. The sailing date has not been announced yet.

Pointing to a weathered fishing trawler with a ‘for sale’ sign painted on it, Mahfouz Kabariti, president of Gaza’s Fishing and Marine Sports Association, points to fishers’ poverty.

“Why sell?” he asks. “Because of years of poor incomes from Israeli restrictions on sea, many fishers have debts they cannot pay off. Fishers were optimistic when the Israelis re-extended the fishing limit six miles. We hoped that maybe it would be extended to 12 miles.”

The Ark initiative includes exporting a token amount of trade goods from Palestinian artisans, an act which Coleman admits is “symbolic” but necessary. Exports will include date goods, embroidery, and crafts from the Aftfaluna society for Deaf Children and other associations in Gaza.

Since 2008 solidarity boats have sailed, or attempted to sail, to the Gaza Strip in efforts to challenge the Israeli-led siege on Gaza and bring awareness over it. The Free Gaza boats of 2008-2009 were followed by the Freedom Flotilla of 2010, and various non-violent attempts afterwards to bring an end to the naval blockade of Gaza.

The Freedom Flotilla is most known for the Israeli naval commandos’ execution of nine and the injury of over 50 of the flotilla activists on board the Turkish ship, the Mavi Marmara while it was in international waters. The rest of the over 600 people on the flotilla boats were taken to Israel and deported home.

“It was a completely illegal act, Israel had no right to board the ship,” says Coleman.

“That has been the theme of how they stopped Freedom Flotilla 2, the Freedom Waves initiative and the Estelle which sailed at the end of 2012,” he says. “Israel has a long history of targeting peaceful, non-violent direct action with violence and sabotage.”

“Gaza’s Ark is the evolution of the flotilla movement. We’ve moved away from sailing into Gaza with aid,” says Coleman. “We now focus on sailing trade out, because it’s quite clear that if the Palestinians were able to trade, their dependence on aid would be diminished quite significantly.”

The Ark website emphasises the need for trade, their slogan is “trade, not aid.”

Aid, the website notes, “does not address the root cause of why the Palestinians of Gaza are in need: the Israeli blockade. We believe that aid provides a ‘cover’ for the actions of the Israeli government against the people of Gaza, alleviating the consciences of international powers while leaving the blockade in place.”

The Gaza’s Ark initiative aims to “challenge the blockade of Gaza from the inside out. By purchasing Palestinian exports from Gaza, buyers around the world can bring critically-needed public attention to the blockade while supporting Palestinian businesses in Gaza,” reads the Ark website.

The siege on Gaza, which was enforced by the Israeli occupation authorities shortly after Hamas was democratically elected in 2006, came into severe force in 2007 when virtually all exports were banned and imports severely limited.

The Al Mezan Center for Human Rights notes that “it is common for the (Israeli) navy to open fire on fishermen, pursue them in Gazan waters, and destroy and confiscate their equipment, including their nets and boats. Such acts constitute flagrant violations of Israel’s legal obligations as an occupying power under international law, and violate the fishermen’s rights to life and work.”

Gaza’s fishers once numbered over 10,000, but under the Israeli siege and assaults, the vast majority have given up on a trade that was passed down to them by their fathers and grandfathers.

With the siege, Israel has also enforced no-go zones along the Green Line border separating Gaza and Israel, and in Gaza’s sea, to which Palestinians under the Oslo accords have the right to fish as far as 20 nautical miles from the coast.

Since 2008, Israel has unilaterally enforced a limit of between six and three miles. Although Israeli authorities expanded this limit back to six miles following the cessation of Israel’s November 2012 attacks on Gaza, in March 2013 Israel again unilaterally declared Palestinians can go no further than three miles.

Fishers and human rights groups report that the Israeli navy shoots on, harasses and abducts Palestinian fishers even within three miles, as close at times as less than a mile from Gaza’s coast. The Israeli navy has killed and injured numerous fishers while shooting at their boats.