BILBAO, Spain, Jun 22 2011 (IPS) - As the second Freedom Flotilla, made up of some 10 ships carrying 1,000 activists from 20 countries, gets ready to sail for the besieged Gaza Strip, Israeli authorities are stepping up their threats. 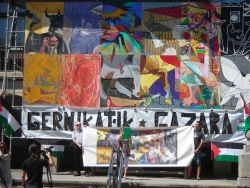 The Israeli government is putting pressure on other Mediterranean countries from which the ships may sail late this month, although the exact date and place have not yet been revealed for security reasons.

Israel has warned foreign diplomats in Tel Aviv to get ready to “face the consequences,” says a statement issued by the Rumbo a Gaza (Sailing to Gaza) Spanish civil society initiative.

The Israeli daily Haaretz revealed that the Israeli Defence Forces held a large drill for special commandos and snipers to prepare to intercept the flotilla.

Israel Navy commander Adm. Eliezer Marom said Jun. 19 that “The Navy has prevented and will continue to prevent the arrival of the ‘hate flotilla’ whose only goals are to clash with IDF soldiers, create media provocation and delegitimise the State of Israel.”

The boat that will carry 50 people from Spain – including this reporter – was named Gernika and will carry to Gaza a loose interpretation by Basque Country artists of the famous painting that Pablo Picasso painted in 1937 after German and Italian forces bombed the Basque village of Gernika (or Guernica) in northern Spain.

The Spanish government has avoided making statements on the issue. But Foreign Minister Trinidad Jiménez said the best way to help Gaza is by means of diplomatic pressure, not flotillas.

“We strongly advise against taking part in the Rumbo a Gaza initiative because of the grave danger that participants in the flotilla could face,” says a warning on the Foreign Ministry web site.

Israel started tightening its stranglehold on the Gaza Strip after Hamas won the January 2006 Palestinian elections, and imposed a full blockade in subsequent years, especially after the Operation Cast Lead military offensive launched in late 2008.

Israel argues the blockade is necessary for security reasons, while human rights groups counter that the siege amounts to collective punishment of Gaza’s 1.5 million mostly civilian residents and that it is illegal under international law.

Israeli authorities have prepared prisons to hold the participants of the flotilla, who will reportedly be arrested and thrown in jail for violating the blockade.

“Last year, 15 days before setting sail, we knew that if the international community did not act, a massacre would take place – which ended up happening,” activist Manuel Tapial, coordinator of the Rumbo a Gaza initiative in Spain and one of the participants in the 2010 flotilla, told IPS.

In the early hours of the morning on May 31, 2010, Israeli commandos firing machine guns air-dropped from helicopters onto the first Freedom Flotilla’s flagship Mavi Marmara, killing nine and injuring over 50 of the civilians on board.

The rest of the 600 passengers were arrested and held without charges for a day and a half in Israel before they were deported.

There is no legal basis for Israel to intercept ships and prevent them from delivering humanitarian supplies, say experts in international law.

“Israel only has jurisdiction over its territorial waters of 12 nautical miles, and neither the waters off Gaza nor international waters are under its authority,” University of the Basque Country professor of international law Juan Soroeta told IPS.

“No U.N. resolution authorises the Gaza blockade,” said Soroeta. “On the contrary, it is an illegal, unilateral measure imposed by force by Israel in the context of an equally illegal occupation of Palestinian territory.”

U.N. Security Council Resolution 1860, adopted on Jan. 8, 2009, calls for “the unimpeded provision and distribution throughout Gaza of humanitarian assistance, including of food, fuel and medical treatment”.

But reports from the international humanitarian organisations working on the ground there confirm that this point is not being fulfilled.

“We have repeatedly urged our governments and international bodies to use observers to inspect the ships and the humanitarian cargo and passengers they are carrying, both at port and at sea, but no one has yet responded to this proposal,” Tapial said.

The Mavi Marmara was expected to take part in Freedom Flotilla II, but its owner, the Turkish Humanitarian Aid Foundation (İHH), said the repairs of damages caused last year have not been completed and the ship is not in a condition to make the trip.

There has been speculation as to whether this decision has anything to do with secret talks held by Turkey and Israel.

But the fact that the flotilla is going ahead undermines the argument that the campaign was organised by the IHH, an Islamic charity, which Israel accuses of having links to terrorism.

At the same time, within Israel, “a public debate is taking place on what to do, with some arguing that we should be allowed in because we are civilians only carrying humanitarian aid, while the blockade, according to Israel, is only against weapons smuggling,” Tapial said.

Regardless of the difficulties, the Freedom Flotilla II – Stay Human, named in honour of Italian peace activist Vittorio Arrigoni, who was murdered in April in Gaza, aims to deliver its humanitarian aid, including construction materials, medical supplies and educational materials.

The U.N. agency for Palestinian refugees (UNRWA) “informed us in a letter that they could not receive our deliveries, so that Israel could not accuse them of being part of the conflict,” Tapial said.

The 10,000 tons of humanitarian aid carried by the first Freedom Flotilla was confiscated by Israel along with the personal effects of the passengers and the reporters’ equipment.

None of the items were ever returned, making it “booty in the best pirate tradition,” said Spanish lawyer Enrique Santiago, who was involved in preparing the charges against Israel for the assault on the flotilla in international waters.

International support for the second flotilla has only grown, with backing from thousands of personalities from around the world, such as Nobel Peace Prize-winners Rigoberta Menchú of Guatemala, Mairead Maguire of Northern Ireland, Jody Williams of the United States and Shirin Ebadi of Iran.

The four prominent peace and human rights activists called on U.N. Secretary-General Ban Ki-moon to urge the governments of the countries concerned to take the necessary measures to guarantee the safety of those taking part in the mission.