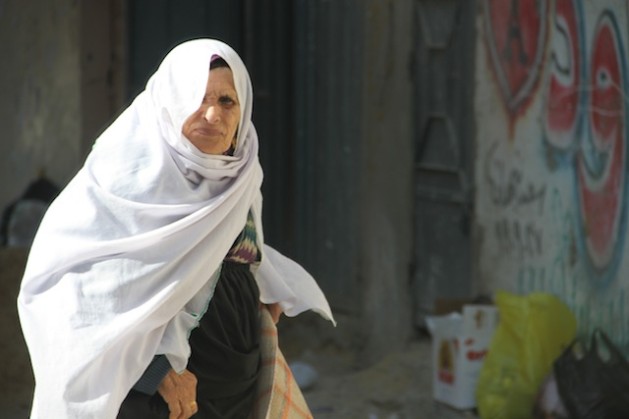 GAZA CITY, Mar 7 2013 (IPS) - “In Gaza we don’t lead normal lives, we just cope, and adapt to our abnormal lives under siege and occupation,” says Dr. Mona El-Farra, a physician and a long-time human rights and women’s rights activist in the Gaza Strip. On International Women’s Day, when many of the world’s women are fighting for workplace equality and an end to domestic violence, Farra and the majority of Gaza’s women fight for the most basic of rights.

“It is difficult to live in this small piece of land, where basic needs like clean water, regular electricity, proper sanitation and means of recreation are not met. Women in Gaza are particularly traumatised by the continuous Israeli military attacks,” says Farra.

A 2009 Palestinian Centre for Human Rights (PCHR) report highlights the suffering of Palestinian women under the illegal Israeli-led siege imposed on Gaza for the past seven years, and under the 23 days of Israeli attacks in 2008-2009 which killed over 1,400 Palestinians, including 112 women.

The report, ‘Through Women’s Eyes’, notes Gazan women’s continued struggle “as they attempt to come to terms with their grief and their injuries; with the loss of their children, their husbands, their relatives, their homes, and their livelihoods.”

For Hiba an-Nabaheen, 24, a media studies graduate from Gaza’s Palestine University, the biggest issues facing women in Gaza are the poverty and unemployment that result from the siege.

“How can a woman whose husband has died or been imprisoned continue to take care of her children? The deadly Israeli wars we endure don’t compare to the growing poverty we face. I’m a university graduate and can’t find work, and many graduates like me face the same problem, including those with exceptionally high marks.”

From a family of ten, Nabaheen is the only child to have yet gotten a degree. “My father is disabled and cannot work, and my siblings are younger than me. Even my sister who has a 98 percent average in high school won’t find any work when she finishes university.”

Um Oday, 30, would love to work. “I have three young children to care for, but my husband is very supportive of me working, if I found work. In addition to my university education, I’ve taken different training courses in the hope that I’ll find work. But in Gaza, there is none.”

Tagreed Jummah, director of Gaza City’s Union of Palestinian Women Committees (UPWC), agrees that the siege is the main oppressor.

“The siege affects us all, but it especially affects women,” says Jummah. “In recent years, more women have been forced to become heads of the family because their husbands have been killed, are in Israeli prisons, or are unemployed as a result of the siege. But the majority of these women have no means of earning money.”

An August 2012 United Nations (UN) report, Gaza in 2020: A liveable place? cites unemployment as “higher than in the late 1990s.” The report highlights the impact on women, whose unemployment rate in early 2012 was 47 percent.

For Malaka Mohammed, 22, an English Literature graduate from Gaza’s Islamic University, and now employed at the university, higher education is both her greatest ambition and greatest obstacle.

“In Gaza, whether you are a woman or a man, you face the same consequences under the siege and the occupation. I’d like to do a Masters degree, but there is no English Masters programme here.”

For the past over ten years, Israel has banned Gazan Palestinians from studying at universities in the occupied West Bank.

“Studying abroad is very expensive, so I am searching for a scholarship, but even then I will be among thousands of people applying.”

Egypt under the Mubarak regime was complicit in preventing hundreds of Palestinian students holding places and scholarships in foreign universities from leaving the Strip.

“To be honest, when it comes to the impact of Israel’s siege and colonial policies on the people of Gaza, indeed all of Palestine, I do not think that the experiences of men and women differ from each other,” says Baker.

“When Israel deliberately bombards schools, both males and females are affected. When talking about the limits Israel forces upon our aspirations, both genders share the same suffering. The Israeli government acts with indifference to the Palestinian population. The same lethal policies are applied to men, women and children in an indiscriminate manner.”

But women do have particular problems. The siege-manufactured poverty leading 80 percent of Gaza’s 1.7 million Palestinians to be food-aid dependent has caused increasing rates of malnutrition and anaemia in women.

A June 2012 joint report by Medical Aid for Palestinians (MAP) and Save the Children notes that anaemia affects 36.8 percent of pregnant women in Gaza and that anaemia can result in “poor pregnancy outcome, reduced work productivity in adults,” and “contributes to 20 percent of all maternal deaths.”

For UPWC’s Tagreed Jummah, the Palestinian woman “represents Palestinian resilience, resistance, is strong, and is a mirror of the Palestinian struggle and steadfastness. We’ve lost families, children, and suffer under the closures and Israeli army attacks. We carry all of the suffering of our people, but we continue living and continue resisting.”

In its report on the suffering of Gazan women, PCHR highlights that prospects will not improve until the siege on Gaza is lifted and normal economic activity allowed.

“The dire economic situation means that many women and their families are sliding deeper and deeper into abject poverty. They have suffered the horrors of an illegal war, and now are struggling just to survive.”