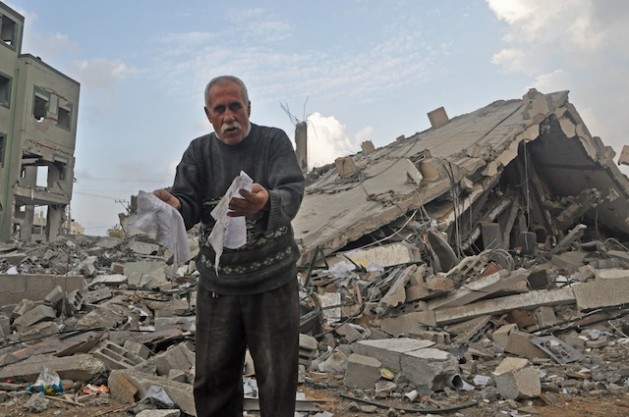 Abu Mohammed, whose family of 15 lost their home after an Israeli bomb attack, unearths papers from the rubble of a civil government office building. Credit: Eva Bartlett/IPS

GAZA CITY, Dec 10 2012 (IPS) - When Israeli bombs struck the Abu Khadra complex for civil administration, they also gutted the sixth floor of the Abu Shabaan complex, located ten metres across the road. According to the Palestinian Centre for Human Rights (PCHR), eight Israeli warplane-fired bombs levelled roughly half of the government compound in eastern Gaza City in the early hours of Nov. 21.

The bombings also took a considerable toll on the homes and businesses nearby, including the Gaza bureau of Al Jazeera.

Over 50 percent of the private medical centre in the Abu Shabaan building was destroyed, says Dr. Naim Shariff (42), owner of the Benoon In Vitro Fertilisation clinic.

Two weeks after the bombing tore apart the sixth floor and ravaged the fifth floor, Shariff has re-paned the windows, ordered new specialised machinery, and re-opened for clients.

“The problem with replacing my machines and equipment is that most of it doesn’t exist in Gaza. It takes months to arrive and costs more money than it would elsewhere,” he says.

“What else can I do but start again? There’s no insurance here for war damages.”

Three floors down, a privately-run dentist’s office has replaced broken windows and office glass, and installed a new reclining dental chair in place of the destroyed one.

“The walls were completely black before,” says Doa’a Moshaawi (32), a dentist. “Everything was damaged here, all the jars of medicine and instruments we use in our practice were destroyed.”

The blown out Abu Shabaan building, and the testimonies of its tenants, add to the mounting body of evidence that Israel’s bombing sprees in the Gaza Strip disproportionately affect civilian property, homes and lives.

The Geneva Conventions prohibit attacks that will lead to “loss of civilian life, injury to civilians, damage to civilian objects, or a combination thereof”, all of which are inevitable in the overcrowded Gaza Strip.

Civilians in the line of fire

Around the corner and down the street a few hundred metres, Hani Lulu (60) watches as a labourer reinstalls his sweets shop’s metal security door, blown off its hinges when Israeli bombs targeted the Saraya, Gaza’s main security complex, just opposite his building.

A year-old baby named Rama al-Shandi was killed in those blasts on Nov. 19, which also left four policemen and four civilians injured.

Lulu has learned from experience. During the Israeli attacks on Gaza in 2008-2009, Israel rained bombs down on the Saraya, causing extensive damage to surrounding residences and businesses.

“We left our home when the Israeli attacks on Gaza started this time,” he says, “so only our building was hurt, not us.”

“There’s no reason to bomb here,” he says. “It’s only the civilians nearby that suffer. We’ve done nothing wrong but the Israelis bomb us.”

The Interior Ministry’s buildings in Tel el Howa, Gaza City, were bombed on two separate occasions on Nov. 16, according to PCHR, causing extensive damage to the surrounding homes, schools, and to the Al Quds hospital, which stands several hundred metres away.

According to the Ma’an News Agency, the blasts caused injuries to nearby Palestinian civilians.

Abu Mohammed (58) lives opposite the destroyed ministry complex. He and neighbours say the first round of four bombings occurred in the early morning hours.

Then, around 9:30 PM, Israeli warplanes struck the ministry again with another four bombs. This time, “it was like an earthquake”, according to Abu Mohammed.

A newly-built United Nations Relief and Works Agency (UNRWA) school and the nearby government-run public school less than ten metres from the ministry buildings were damaged, both with numerous rooms blown out.

“What does this paper have to do with anything related to Israeli security?” Abu Mohammed asks, shaking a sheaf of papers he has pulled from the rubble. “They processed birth certificates, death and marriage certificates here (in the ministry). Passports, I.D. cards.”

“There were fifteen people living in my home. Where are we supposed to go?”

At the end of the row of destroyed homes stands a solemn Abu Yusef (42), soft-spoken but equally devastated.

“It was a civilian area, the Ministry provided papers for us. The salaried people working for the government are civilians,” he says.

“The Israelis had bombed this area before, so we knew that they’d do it again. They want to hit civilian areas.”

Over forty people lived in the three-story apartment in front of which Abu Yusef stands. A sofa pokes out of a gaping hole in the wall of a third-floor room.

“Cement was flying, steel was flying. For more than a half hour after the bombing, it was pitch black, no electricity. I couldn’t do anything, couldn’t move an inch.”

The latest round of attacks on Gaza included the bombing of the Dalou family in their home, killing ten family members and two neighbours.

“Most of them arrived with their brain matter outside of their skulls,” Dr. Ayman el-Sahabani, head of Shifa hospital’s emergency department, tells IPS.

“On the second day, I received an 11-month-old child who was 95 percent burned but still breathing. I couldn’t do anything for him, he died within twenty minutes.”

Four-year-old Reham Nabaheen didn’t survive the Nov. 21 drone attack outside her Nusseirat home. She was dead on arrival at the hospital, with shrapnel lodged in her brain.

With less than an hour to go before the Nov. 21 cease-fire was enforced, Nader Abu Mghaseeb (14) was en route to a shop to buy food for his younger siblings when he became the target of a drone strike in his eastern Deir al Balah village.

The vast majority of those killed and maimed were civilians who did not participate in resistance activities, proving that, again and again, Palestinian civilians are the primary targets of Israeli bombs.