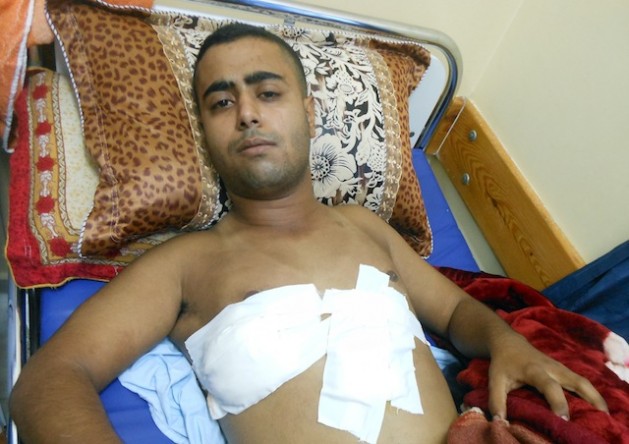 Mahmoud Naim, 21, shot by an Israeli soldier while walking on Palestinian borderland in northern Gaza a week after the ceasefire was called. Credit: Eva Bartlett/IPS.

ABASSAN, Gaza Strip, Dec 4 2012 (IPS) - “It was the first day of the cease-fire. An Israeli soldier shot once in the air and within seconds shot me in the leg. He was only a few metres away.” Haithem Abu Dagga, 26, an electrician and farm labourer, will not be able to work for as many months as it takes his right leg to heal. The bullet exited his leg but fractured his shin bone.

The Nov. 21 Gaza cease-fire stipulates that, among other things, the Israeli army will not launch incursions into Palestinian land, air, and sea, and Israel will not target Palestinians in the border regions of Gaza.

As of the first day of the cease-fire, Israel had already violated these provisions. From the evening of Nov. 21 and throughout the following days, Israeli drones and F-16s have continued to dominate Gaza’s airspace.

The Palestinian Centre for Human Rights (PCHR) reports that in the period Nov. 22-29, Israeli soldiers killed one Palestinian civilian and injured “42 civilians, including seven children” in the border areas of Gaza.

Abu Dagga, a farm labourer from the rural agricultural region of Abassan, was among a number of Palestinians who hoped that the Israeli army would abide by the cease-fire. When they walked on land which most had not accessed for a decade, they did so believing that they no longer had to fear being shot at by Israeli soldiers.

Since just over a decade ago, the Israeli-imposed “buffer zone” has been unilaterally extended by Israeli authorities from the initial 50 metres to the current 300-metre “no-go zone.”

According to the United Nations’ Office for the Coordination of Humanitarian Affairs (OCHA), the 300 metres off-limits area extends at places to more than 1.5 km. PCHR has documented the Israeli army targeting Palestinian civilians as far as two kilometres from the border.

The area annexed by the no-go zone and extended high-risk areas equates to 35 percent of Gaza’s agricultural land. Formerly known for its lush fruit, olive and nut tree growth, the border regions are some of the most fertile areas in the Gaza Strip and formerly produced a wide variety of vegetables, grains, and pulses.

Under the recent Israel-Gaza cease-fire agreement, the no-go region should have ceased with the cease-fire.

The Nov. 22 walk on Palestinian borderland began positively for Abu Dagga. “We walked right up to the fence. The Israeli army came in a number of jeeps, and got out and watched us.” A few minutes later he was on the ground and bleeding, wounded by an Israeli gunshot fired at close range.

A PCHR report notes that six were injured by Israeli gunfire in the Abassan area that day, as well as two others further south in the eastern Rafah border region.

The first border area killing occurred two days following the cease-fire. According to PCHR, on Nov. 23 Anwar Qudaih, 20, and hundreds of Palestinians in the eastern Khan Younis region went to exercise their right to be on Palestinian land. Israeli gunfire targeted Qudaih in the head and injured 20 other civilians.

In northern Gaza Mahmoud Naim, 21, was with a group of friends who likewise wanted on Nov 28. to walk on formerly off-limits Palestinian land.

“There were 15 of us. We went to my family’s land near the border fence. We just wanted to relax, drink tea, and enjoy being on our land,” said Naim.

While he saw an Israeli jeep approach, Naim didn’t see the Israeli soldier inside a heavily fortified concrete military tower.

“There was no warning, the soldier just began shooting at us.” The bullet went in and out of his rib cage area, just shy of his heart.

“We’d gone there two days earlier without problems. No shooting, no soldiers. I don’t know why they shot at us this time.”

Earlier the same day Hassar Nseir, 27, collecting rubble for re-sale, was shot in the leg by an Israeli soldier.

Chief among the many reasons Palestinians risk their lives is the need to farm their land. But rubble collectors, bird catchers, and even families who merely want to visit their land also risk being targeted by Israeli soldiers. In September 2009, an Israeli soldier shot Ghazi Zaneen, 14, in the head on Beit Hanoun land 500 metres from the border.

“We want it to be like it was before, to be able to work on our land,” says Hussein Hamdan, 62, from Abassan. Roughly half of his 30 dunams (a dunam is 1000 square metres) lie within the no-go zone, the other half within Israel. “We want to stop the tanks from entering and tearing up our land.”

Other Israeli army tactics include burning Palestinian crops, destroying wells and cisterns, and demolishing homes and livestock farms throughout the border regions.

“Is the 300 metres the Israelis say is off-limits now accessible? Can we safely access and work on our land now?” These are the resounding questions that farmers like Hamdan ask as they await their chance to return to their border area land without fear of being shot, bombed, or abducted by Israeli soldiers.