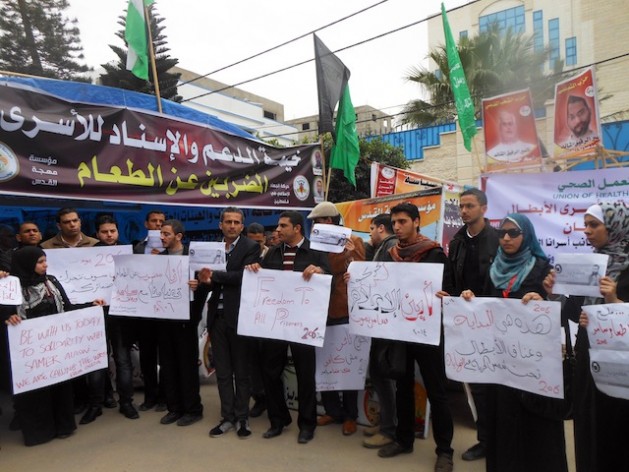 GAZA CITY, Feb 23 2013 (IPS) - A few stoic lines from Palestinian political prisoner Samer Issawi, 33, transmitted to his sister Shireen have given new strength to Palestinian resolve to fight Israeli occupation and its prison policies. As has the hunger strike of four others in Israeli prisons along with Issawi.

“The battle waged by me and by my heroic colleagues, Tariq, Ayman and Ja’affar, is everyone’s battle, the battle of the Palestinian people against the occupation and its prisons,” he told his sister last week. He added that his health has deteriorated dramatically and “I’m hung between life and death.”

The day he sent that message, Feb. 16, was the 208th day of Issawi’s hunger strike. Held under administrative detention in an Israeli prison, Issawi is one of five long-term Palestinian hunger strikers protesting indefinite detention by Israel without charge or fair trial.

On Feb. 19, three days after proclaiming his dedication to hunger striking until justice or death, an Israeli court rejected an appeal for the near-death Issawi’s bail, instead postponing a decision until mid-March. The Palestinian Centre for Human Rights (PCHR) notes that in addition to his hunger strike, Issawi, now 46 kg, recently began refusing water and vitamins.

A Jerusalemite, Issawi was re-arrested months after being released in the October 2011 prisoner swap exchanging Israeli tank gunner Gilad Shalit for 1,027 Palestinian prisoners.

Israel re-arrested Issawi, Ayman Sharawna, 37, and 12 others using article 186 of Israeli military order 1651, which the Prisoner Support and Human Rights Association, Addameer, notes “allows for a special Israeli military committee to sentence released prisoners to serve the remainder of their previous sentence based on secret evidence provided by the military prosecution without disclosing the evidence to the prisoner or his lawyer.”

Re-arrested on Jan. 31, 2012, Sharawna has been on and off hunger strike for over 200 days collectively since Jul. 1, 2012, stopping briefly when he believed there was hope for his release. Already in November 2012, Addameer reported that Sharawna’s health had “drastically deteriorated” and that he was “unable to stand, speak easily or urinate.” A recent independent report suggests Sharawna is now in solitary confinement despite his critical condition, and his health is rapidly failing.

According to Addameer, there are currently over 4,743 Palestinians detained by Israel, including 193 children and 178 held under administrative detention.

“Administrative detention is an illegal Israeli policy where the Israelis imprison Palestinians without any trial or charges, claiming that they have secret information that certain Palestinians are dangerous to Israeli security,” says Gaza-based Osama al-Wahidi, head of the information department at the Hussam association for Palestinian prisoners and ex-prisioners.

“Two of the hunger strikers were arrested immediately after the November 2012 Israeli attacks on Gaza,” notes Wahidi.

One of the two, Jafar Ezzedine, 41, is likewise nearing death on his quest to freedom.

“After nearly three months of hunger striking, he is very thin, very weak and ill. He looks like he shouldn’t still be alive,” says Tarek Ezzedine, Jafar’s brother. Also imprisoned by Israel, Tarek Ezzedine, director of Voice of Prisoners Radio, was likewise released in the prisoner swap, and immediately exiled by Israel to Gaza.

“This isn’t his first hunger strike,” says Tarek Ezzedine. “He went on a 54-day hunger strike in March 2012, part of a mass prisoners’ hunger strike.” In May, 2012, through Egyptian mediation, more than 1,000 prisoners agreed to end their strikes when Israel agreed to improve conditions for Palestinian prisoners.

“We have no direct contact with Jafar. His lawyer says that Jafar’s health is extremely poor now.”

Tarek Qa’adan, 40, and Yousef Shaaban Yassin, 29, participated in demonstrations against the November 2012 Israeli attacks on Gaza. They were among 55 Palestinians arrested on Nov. 22, in what Tarek Ezzedine says is punishment for peacefully protesting the Israeli attacks.

“On the same day that they stopped bombing Gaza, the Israeli army took Jafar from his house,” says Tarek Ezzedine. “He participated in a demonstration in Jenin, where over 1,000 people were demonstrating, why arrest him? He didn’t organise the demo, he was like anyone participating.”

As with Samer Issawi, Addameer reporrs that already as of Jan. 24, 2012, Qa’adan was at risk of a fatal heart attack due to his weakened state.

“The road of prisoners, and the road of Palestinians in general, is not paved with flowers, it’s paved with thorns,” says Mahmoud Sarsak, a Palestinian footballer from Rafah, and one of the prisoners’ movement victors.

Waging a 92-day hunger strike in protest over being held for three years by Israel in a similar form of administrative detention specific to the Gaza Strip, Sarsak was released in July 2012.

Like Sarsak, Hana Shalabi and Akram Rikhawi were likewise released back to the Gaza Strip after their extended hunger strikes.

“If any of the hunger strikers die, it will not be in vain,” says Sarsak. “Their martyrdom will be a message to re-awaken the struggle for freedom. There will surely be a third Intifada (uprising) against the Israeli prison system and the occupation.”

Although hashtags like #ReleaseIssawi, #PalHunger, and #FreeSamer have been trending on Twitter, and news of the hunger strikers is all over Facebook, little has been said or written in international media about the plight of the five Palestinian strikers nearing death.

“When Shalit was being held in Gaza, the whole world, especially America and Obama, was focused on Shalit, talking about democracy, calling on the Red Cross to be able to visit him,” says Tarek Ezzedine.

“So why is the world silent on our prisoners?”

On Feb. 13, 2013, Richard Falk, United Nations Special Rapporteur, called for the release of Palestinian prisoners held without charge, saying “Israel must end the appalling and unlawful treatment of Palestinian detainees. The international community must react with a sense of urgency and use whatever leverage it possesses to end Israel’s abusive reliance on administrative detention.”