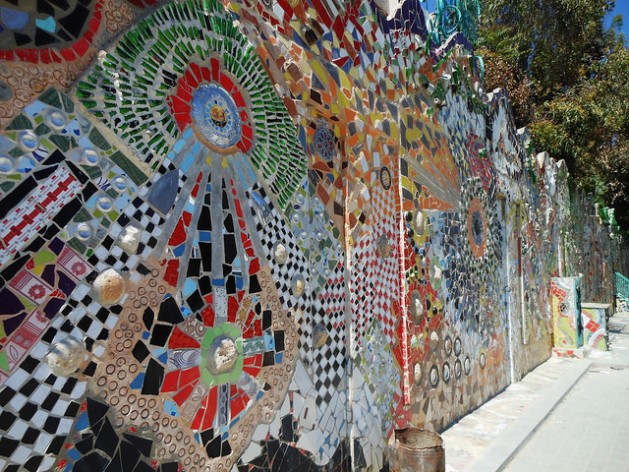 A wall mural in Damascus "to send a message to the world that we Syrians love life," says the lead artist, Moaffak Makhoul. Credit: Eva Bartlett/IPS.

DAMASCUS, May 12 2014 (IPS) - On a weekday afternoon, the Old City of Damascus heaves with people, cars, motorcycles, bikes. Markets are crowded with locals bartering with merchants for the heaps of spices, flowery perfumes, clothing, and most things one needs, abundant in the Hamidiyah market.

At the end of the historic Roman Via Recta (Straight Street), boys play football amidst ancient columns.

Syria, in its fourth year of a devastating foreign-backed armed attempt to overthrow the government, is somehow still pulsing with life and hope.

In the narrow back lanes of the Old City, couples walk hand in hand, older men greet each other with broad smiles and a kiss on each cheek. Music wafts from open doors of ancient homes, their courtyards bursting with greenery. A milkman delivers milk from large tins strapped to his bicycle.

But the spacious old homes converted into hotels or restaurants now have no tourists. Various shop owners highlight the same issue: they have goods, but no buyers.

Bassam runs his family’s antiques and jewellery store, Giovanni, near the East Gate entrance to the Old City, in an old Damascene home with vast arches and ornate wooden décor.

“Business is not very good, because of the situation. Many people used to come here.” He picks up a framed photo of himself and a woman in his store. “That’s Catherine Deneuve, a French actress. She’s very famous,” he says, reiterating that well-known people from around the world used to frequent his store.

Inside the Umayyad Mosque, worshipers pray and relax in the cool interior, a boy twirls Sufi-style through the mosque. Outside, women sit in the courtyard shade with their children, picnicking on sandwiches.

The vast square opposite the mosque is filled with food vendors, clothing vendors, families milling about, kids selling roses. Children gather around a hoard of pigeons, buying feed to toss to them.

A popcorn vendor in his 20s says things are improving in Syria. “Life here is good, things have gotten back to normal, the government supports us. But my house is in Babbila, just outside of Damascus. I can’t go back there, the ‘rebels’ have taken over.”

Almost daily, armed groups launch mortars on civilian areas in Damascus, from villages on the outskirts like Jobar, Mliha. On Apr. 15, mortars struck Manar elementary school, killing one child and injuring 62 others. A kindergarten was also shelled that morning, in the same densely-inhabited area of Damascus, injuring three more children.

On Apr. 29, the mortars struck Bader Eddin al-Hassni Institute for religious science, killing 14 students and injuring 86 others, according to SANA news.

As I sit outside the old city walls one afternoon, roughly one hundred metres from East Gate, bullets whiz closely past, coming from the direction of Jobar, an area controlled by armed groups.

Al-Midan, a district of Damascus known for its traditional Syrian sweets, still receives local business but faces the same loss of foreign customers as most in the tourism industry. “I used to bring delegations here specifically for the sweets,” says Anas, a journalist with Syrian television. “But as you see there are no tourists here now.”

Nagham, a university student, says even many local Syrians won’t go to Midan now. “People are afraid to come here now, because it’s so close to Yarmouk. Midan is safe, but people think that the ‘terrorists’ in Yarmouk will fire mortars here.”

Due to attacks on civilians, including car bombings, checkpoints are installed throughout Damascus and the countryside, causing long lines of traffic as soldiers check vehicles for explosives. But without the checkpoints, there would be more loss of civilian life.

Homs residents know all too well the deadly effects of the car bombings. On Apr. 9, for example, two car bombs detonated one after the other on the same residential street, killing 25 civilians and injuring at least 107, according to Syrian state media. On Apr. 29, two more car bombs and a rocket attack killed another 42 civilians in Homs.

But Homs is also a place where the reconciliation movement has taken flight, with fighters nearly daily laying down their weapons and opting for a political solution for Syria.

In Latakia, a coastal city roughly 350 km northwest of Damascus, near the Turkish border, internally displaced Syrians from the Armenian populated village of Kasab take refuge in an Armenian Orthodox Church.

On Mar. 21, armed groups began firing missiles from nearby Turkey upon the village, later entering and taking it over, committing atrocities against the civilians. Eighty people are reported to have been killed, and nearly 2000 villagers fled to Latakia and other areas to escape the attacks by a reported 1500 Chechnyan and other foreign, al-Qaeda-affiliated insurgents, backed by Turkish special forces.

“They can destroy our houses, but we’re going back. We believe in the Syrian Arab Army,” said Suzy, from Kasab, who described some of the atrocities committed. “They raped the older women, because they couldn’t find girls, so they raped the elderly. They destroyed everything, they robbed our houses, they broke the statue of the Virgin Mary.”

When asked her sentiments on Syria’s president, she replied without hesitation, like so many in Syria. “We have a leader, Dr. Bashar Al-Assad. We love him so much, we don’t want anything else. We want him, we want Syria back.”

Elsewhere in Latakia, a city secured by the Syrian army but attacked from a distance with missiles, children and teens play in a fountain in a large, clean park, and men and women sit smoking shisha or hookah and chatting.

Fadia, an unveiled Sunni Muslim, sitting with a group of veiled and unveiled women, says that internally Latakia does not have serious problems. “Life is good here, we’re living happily, the army have protected us here. We love our president, our army, our country, but the outside forces want to destroy the country. There is no problem between Christians, Muslims, Armenians, Alawites here. We are all one family, no one can split us apart.”

This is a point Lilly Martin, who is from California but has lived in Syria for the past 22 years, drives home.

“At the beginning, we had a surge of violence, protestors attacking Syrian police and security, but right away the Latakian people turned against it. The population here didn’t accept it. We have Christians, Muslims, and minorities here. There is very little support for the ‘rebels’ here, so it’s been a peaceful city,” she says.

In Homs, Latakia, Damascus, walls and shop doors are decorated with large, painted replicas of the Syrian flag and posters of President Assad. Syrian flags appeared at Easter celebrations, wedding receptions and engagement parties. And along with the flags, there are patriotic songs for Syria and President Assad, with a roomful of celebrants singing along, hooting and clapping.

On the Autostrad, the main street leading to the al-Mezze district of Damascus, a block-long mural brightens the otherwise standard wall surrounding a school. The colourful mosaic of scraps of tiles and recycled items is the project of six artists. Moaffak Makhoul, the lead artist, explains the concept.

“We did this for the children, to bring a smile to their faces. And we wanted to send a message to the world that we Syrians love life, and that we insist on living, on surviving,” he says.

His message also has an important political element to it. “To those who espouse the ideology that wants to eliminate others, the Takfiri ideology, we tell them ‘no’.”

Four youths in their late teens stop to talk. “We were living well, with security, before this happened. We were living in freedom. Now we’re not,” says Rehab, one of the girls. “Now you don’t know who is a terrorist. We just want our country to return to how it was.”

Ramez, another one of the teenagers, says things are better now, “life is improving.” Batoul, the other girl, adds “We love Bashar. He’s a good person. We know what he has done to improve the country. And before any of these things began, we were living well, safely.”

Bassam, in his lonely East Gate store, is also optimistic. “Peace is coming sooner or later – no, sooner. Damascus is a wonderful city. And the people are wonderful too.”

The call to prayer sounds, church bells ring out, in a city and country where life goes on despite it all.