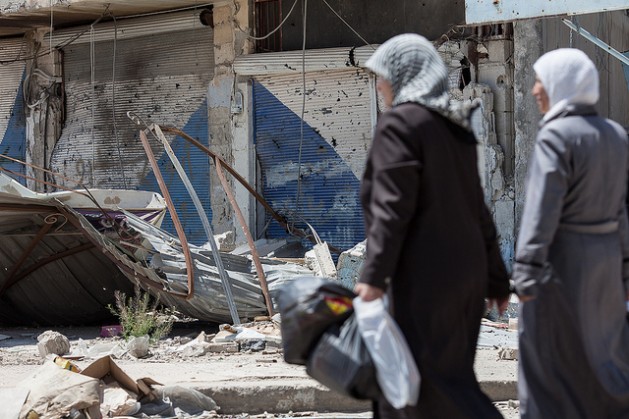 WASHINGTON, May 7 2014 (IPS) - Despite new gestures of support for the Syrian opposition, the administration of President Barack Obama is unlikely to change its longstanding policy of restraining U.S. involvement in the country’s more than three-year-old civil war, according to experts here.

“It’s clear that the administration wants to show it has a policy even though it doesn’t in the sense of anything comprehensive with well-defined goals." -- Wayne White

In particular, the administration remains strongly opposed to providing surface-to-air missiles (SAMs) to the rebels for fear that they could eventually fall into the wrong hands, most importantly radical Islamist forces aligned with or sympathetic to Al Qaeda.

SAMs, however, are at the top of the shopping list brought by the leader of the main external opposition coalition, Ahmad Al-Jarba, and the latest head of its military wing, Gen. Abdul-Ilah Al-Bashir, who are meeting with top administration officials, very possibly including Obama himself, key lawmakers, newspaper editorial boards, and think tanks over the next week.

“We do have a problem with the air forces, the air raids and the barrel bombs,” he told an audience at the U.S. Institute for Peace Wednesday. “(We) need efficient weapons to face these attacks, … so we can change the balance of power on the ground. This would allow for a political solution.”

Jarba’s trip here, coupled with the administration’s announcement Monday that it was according the Washington and New York offices of Jarba’s western-backed Syrian Opposition Council (SOC) official diplomatic status and asking Congress to approve 27 million dollars more in “non-lethal” assistance (bringing the total to 287 million dollars), marks a visible upgrade in U.S. support.

Both moves also followed the recently reported delivery of at least 20 U.S.-made TOW anti-tank missiles to “moderate” rebels who have been vetted, trained and partially equipped by the Central Intelligence Agency (CIA) in collaboration with its allied intelligence agencies in the region.

More will follow if the rebels can show that they’re being used effectively and kept out of the hands of other factions, according to administration officials.

The latest developments have given heart to the opposition, its regional backers, and Obama’s critics on both the left and the right here who have long complained that he was doing far too little to support the rebels in a vicious and bloody civil war that is estimated to have killed more than 150,000 people and displaced as many as eight million others, about 2.5 million of whom have sought refuge in neighbouring countries, notably Jordan and Lebanon, whose own stability is increasingly threatened by the exodus.

They hope it presages a major shift in U.S. policy towards ensuring that the “moderates” among the dozens of rebel factions will receive enough assistance to halt, if not reverse, the momentum the regime has built on the battlefield over recent months and also protect them against assaults by jihadist factions, especially the Islamic State of Iraq and Syria (ISIS) and the Al-Nusra Front with which the “moderates” have often joined forces, at least for tactical purposes.

But while the latest gestures clearly indicate greater support, such hopes are likely to be misplaced, according to most experts here.

“The opposition is going to be once again very disappointed that, after repeated testing, that you’re still taking only tentative steps rather than giving them a more robust capability, especially when SAMs are clearly not on the table,” according to Wayne White, a former senior Middle East intelligence analyst at the State Department.

“It’s clear that the administration wants to show it has a policy even though it doesn’t in the sense of anything comprehensive with well-defined goals that is in any way realistic in terms of giving the resistance a real leg up on governments,” he told IPS.

“So far as I can tell, Obama isn’t going to change his policy, and [the opposition] isn’t going to get lots of money or arms from Washington,” said Joshua Landis, a Syria expert at the University of Oklahoma and publisher of syriacomment.com, a widely read blog.

“I think this is a way for [Secretary of State John] Kerry, who’s been much more aggressive on Syria than Obama, to show he has a policy after the failure of [the] Geneva II [peace talks between the regime and the opposition],” he told IPS.

“It’s possible that Obama has allowed three percent more aggressiveness in the policy to show Assad that he’s not going to reward him, show the opposition that he’s still on their side, and reassure the Saudis who threatened to ‘go it alone’ after September when Obama failed to attack” Syria after it crossed his “red line” by allegedly using chemical weapons.

According to Paul Pillar, a Georgetown University professor and retired career CIA veteran who served as Washington’s top Middle East intelligence analyst from 2000 to 2005, the latest steps by Obama are motivated by several considerations.

“(I)t is not an all-or-nothing proposition in the administration’s eyes, and there are several reasons to make at last modest gestures in the direction of greater involvement and support for the opposition,” he told IPS.

“One of the motives is the domestic political one of having to be seen to do something in response to the incessant charges of the administration being adrift or weak or feckless. Its relationship with its Gulf allies is another one, and this does figure into relations with the Saudis particularly.”

“In addition to that, the administration probably sees some advantage in not letting the Assad regime experience an increasingly one-sided battlefield victory. [Given] how the tide of battle on the ground has been mostly in the regime’s favour in the last few months, it makes policy sense to keep limited pressure on the regime …so it doesn’t get too comfortable and to thus continue to see some necessity for negotiation and political change in Syria that would take greater account of the interests represented by the opposition,” he said.

Both Landis and White agreed that the administration’s concerns about Saudi Arabia, which aggressively promoted Jarba’s candidacy for SOC chief last year and has repeatedly threatened to provide the rebels with SAMs and other advanced weaponry that Washington wanted to curb, have been a major consideration.

Growing tensions between the two nations over Syria and possible détente between the U.S. and Riyadh’s regional arch-rival, Iran, prompted a summit between Obama and King Abdullah in Riyadh at the end of March. Since then, it appears that the two sides have co-operated more closely in support of the opposition.

“In order to keep Saudi Arabia from giving too much to the rebels, we’re okaying the minimum,” according to Landis. “We can’t afford to let them go off the reservation.”

Saudi Arabia was not alone in pressing for stronger support to the rebels, noted White. “The Israelis, speaking more sotto voce, also considered our policy anaemic. And the Turks and Jordan are both beleaguered by the refugees, and we certainly don’t want Jordan destabilised. That is of great concern to both us and the Israelis,” he said.