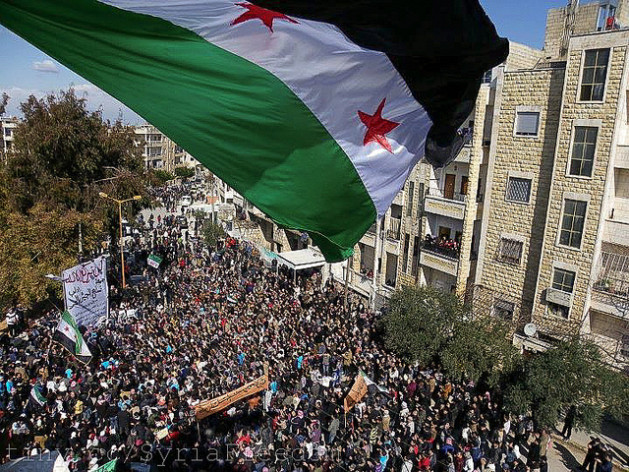 WASHINGTON, Oct 18 2013 (IPS) - Despite U.S. and Western pressure on the opposition to take part in U.N.-sponsored talks aimed at halting the two-and-a-half-year-old Syrian civil war, most experts here believe the rebels are unlikely to show up any time soon. And even if they do, the results will be unlikely to change much of anything on the ground.

The so-called “Geneva 2” negotiations, which are aimed at reaching an agreement on a political transition to eventually replace President Bashar Al-Assad, are supposed to take place toward the end of next month.

“Today, Geneva 2 is a figleaf designed to conceal the fact that most Western countries are coming to the conclusion that they don’t want to see any side win." -- Joshua Landis

But analysts here believe the disarray within the opposition and its increasingly apparent inability to represent rebel factions — particularly radical Islamist factions, two of the most prominent of which are linked to Al-Qaeda and have always rejected international negotiations designed to end the conflict — that are leading the actual fighting on the ground could make the conference irrelevant, if it indeed takes place.

“More and more, the armed groups on the ground are renouncing ties to the political opposition and are explicitly opposed to a Geneva conference,” Mona Yacoubian, a Middle East specialist at the Stimson Centre, told IPS here.

“It’s very difficult to assert that holding it within the next six weeks is a realistic alternative, but it’s also a very important goal to work toward, understanding that there really are no appealing alternatives in the face of a situation on the ground that continues to get worse,” she said.

Indeed, with well over 100,000 people estimated to have been killed and another two million who have sought refuge in neighbouring countries, the increasingly sectarian conflict in Syria appears more and more intractable, even as the Assad government appears to be cooperating with U.N. efforts that got underway last month to destroy its formidable chemical arsenal.

“We are at a stalemate, and anybody who looks at this objectively today sees that Syria is being effectively partitioned,” according to Joshua Landis, a Syria expert at the University of Oklahoma and publisher of the widely read Syria Comment blog.

While Assad continues to rule over the western and southern half of the country, the north and east are being run by various rebel militias – some of which find themselves increasingly in conflict with each other.

Kurdish militias have gained control of the country’s northeastern corner, although recent clashes between them and radical Islamist factions – many of them dominated by foreign fighters – have sent thousands of refugees over the border to Iraqi Kurdistan.

“Today, Geneva 2 is a figleaf designed to conceal the fact that most Western countries are coming to the conclusion that they don’t want to see any side win,” Landis told IPS. “And, rather than say we don’t want to see a winner, they’re looking for a political solution, but that will be extremely difficult to broker.”

Syria’s deputy prime minister, Qadri Jamil, said Thursday during a visit to Moscow that the talks should take place Nov. 23-24, but his Russian hosts, who, along with Washington, have been pushing hard for the conference to take place, declined to endorse those dates.

Echoing Landis, Jamil, who, despite his government post, has insisted he will take part in negotiations as part of the opposition, stressed that the conflict has reached a “military and political dead end.” The negotiations, he said, offered a “way out for everyone: the Americans, Russia, the Syrian regime and the opposition.”

Opposition backers in the region – most importantly, Saudi Arabia, Turkey, and Qatar — had hoped that a chemical attack against rebel positions in suburban Damascus that Washington claimed killed more than 1,400 people would trigger a U.S. and Western military intervention that would shift the balance of power on the battlefield decisively in the rebels’ favour.

But when that failed to materialise – due both to the clear reluctance of President Barack Obama to involve the U.S. in yet another Middle Eastern civil war and unexpectedly strong public opposition, as well as the 11th-hour agreement between the U.S. and Russia, Assad’s most important external backer, on a U.N. plan to dismantle Damascus’ chemical arsenal – those hopes evaporated.

Indeed, by recognising and even praising Assad’s cooperation in dismantling his weapons, the U.S. appears to have boosted the Syrian president’s diplomatic position even as it continues to insist publicly that his replacement by a transitional government with full executive powers remains the goal of the Geneva negotiations.

But, according to a new report released Thursday by the International Crisis Group (ICG), the most credible political opposition that could take part in the talks, the National Coalition of Syrian Revolutionary and Opposition Forces, lacks sufficient influence inside Syria to truly represent the various rebel factions, including even those who are not tied to Al-Qaeda.

Described by the ICG as a “hodgepodge of exiles, intellectuals and secular dissidents bereft of a genuine political constituency, as well as Muslim Brothers geographically detached from their natural base,” the Coalition, like its regional backers, had relied heavily on Western military intervention similar to that which eventually overthrew the regime of Libyan leader Moammar Gaddafi.

But “(f)or the Obama administration, such direct military intervention never appears truly to have been in the cards,” according to the report. “Instead it saw the priority as getting the opposition to unite and present a more broadly appealing vision of the post-Assad future.”

“In contrast, the opposition saw value in those tasks … only insofar as they were accompanied by substantially more Western support. Washington waited for the opposition to improve itself; the opposition waited for Washington to empower it. Both shared the goal of a Syria without Assad, but neither developed a strategy to achieve the goal that took account of the other’s constraints, triggering a cycle of frustration and mistrust that discredited the political opposition and Western governments alike in the eyes of the uprising’s rank and file.”

Even more damaging, according to the report, has been the lack of coordination among its regional supporters which in turn helped spur the rise of extremist groups – most of them financed by private funding from the Gulf states — within the rebel ranks. The Supreme Military Council (SMC), which is represented in the Coalition and has become the recipient of most humanitarian and military aid and training provided by Western countries, including the U.S., “enjoys scant leverage on the ground,” according to the report.

Instead of creating a new group, however, the Coalition’s foreign backers should urgently improve their coordination, especially on the military front; press Gulf states and Turkey to curb private support for radical groups; and urge the Coalition to focus more on providing basic services and strengthening activist networks in rebel-held areas — in part to better challenge and confront jihadi groups – and on “reaching internal consensus on workable negotiation parameters” for the Geneva track which “remains the best hope for ending the war.”

“I assume Assad will send someone to Geneva, and the Coalition will, too, because no one wants America to blame them for boycotting,” Landis said. “But it will all be a fig leaf for what is becoming the de facto partition of Syria, because that’s what’s happening on the ground.”