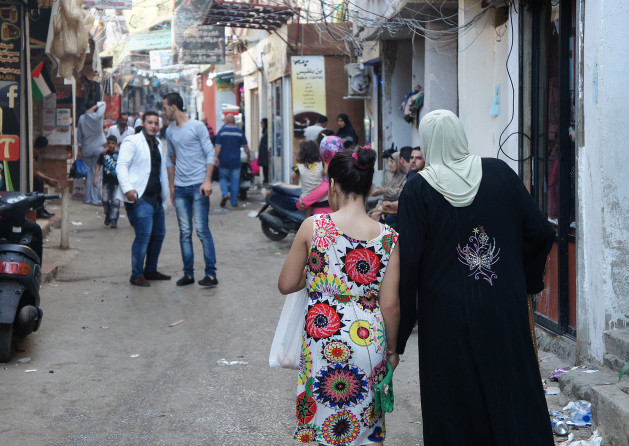 Palestinian camps in Lebanon are just some of the places Syrian refugees find shelter in. Credit: Rebecca Murray/IPS.

While most are celebrating, despair is palpable among the poverty-stricken female Syrian refugees receiving psychological counseling at a community centre run by the Danish Refugee Council (DRC) in the coastal town of Sidon.

“I don’t want to leave the house,” quietly sobbed Fatima, a 32-year-old mother of four who fled Aleppo after family members were killed and her husband’s business was destroyed by the war a year ago.

“Our displacement from our country has made us old.”

Her tear-stained face framed by a cheap black burqa, Fatima said she now lives in a crowded school with other Syrian families in the volatile Ein al-Helweih refugee camp, Lebanon’s largest settlement established to house Palestinian refugees more than 60 years ago.

Since they arrived, Fatima’s family anxiously watched from the sidelines as a battle raged at the camp between the Lebanese army and supporters of a firebrand Sunni cleric in June. This is a congested, hostile environment where they must navigate checkpoints daily.

“I have sympathy for the Palestinians because they live in bad conditions, and I know that we make their situation worse,” she said.

Fatima recently sold two of the family’s blankets for 15 dollars, a decision she says she regrets as the winter draws near. But she was desperate for money.

“My children don’t have shoes and I can’t afford them,” she said. “Their teachers say they should come in decent shoes. My son is psychologically torn apart. He sits alone at school while the other children play together. He was not like this before.”

Fatima has no plans to celebrate Eid. “We used to give each other all sorts of things. That’s why I won’t step outside.” She sighed. “Our displacement from our country has made us old.”

The United Nations High Commission for Refugees (UNHCR) says there are almost 790,000 refugees from Syria registered in Lebanon. But the government claims the number exceeds a million – which is almost one quarter of Lebanon’s population.

Women, like those who attend the community centre, are often the most vulnerable refugees during wartime. Social worker Almaza Elchami provides a rare source of solace to those that visit her.

“A few weeks ago it started to rain and the women started crying,” Elchami said. “They realised winter is coming, with the cold and rain. Their children have nothing to wear. Often their homes have no doors or windows. The rain was a reminder of what they are up against.”

For women like Asma, a teenage mother who fled the bombing in Damascus, life in a cramped common shelter is an emotional pressure cooker. Her husband can’t find work and she has to take care of her one-year-old.

“We have lots of fights about this situation,” Asma said. “The men want to control everywhere we go.”

“There is a real sense of frustration and sadness because they have lost their lives and homes, there are not a lot of job and education opportunities, and so they are lingering without much to do. All these things contribute to more violence in general.”

Poverty forces some Syrian women to beg on the streets. Some face pressure to swap sex for services or goods. Negative stereotypes of Syrian women as prostitutes are pervasive in Lebanon.

“Almost every woman we spoke with had a real sense of feeling insecure going outside and feeling verbally harassed regularly, sometimes approached by men, certainly harassed by employers, sometimes landlords, or on the street in public,” said Margolis.

Elchami agreed. “They are facing a lot of bullying,” she said. “One refugee said a Lebanese woman told her she was ruining the mosaic of Lebanon. She was putting on make-up at the time and the woman said, what are you doing? Your country is all messed up and you are putting make-up on?”

Last week women gathered at the community centre to discuss plans for Eid. Elchami said they were worried about doing nothing, but when someone suggested taking the kids for a walk along the water as a treat, a woman retorted, “What if my child wants a balloon or another gift on display?”

“This Eid my children will have no school, but I have no place to go,” said Fatima. “At these times there is a need to be at home with family. So to me this holiday is opening up a wound, and it hurts all over again.”