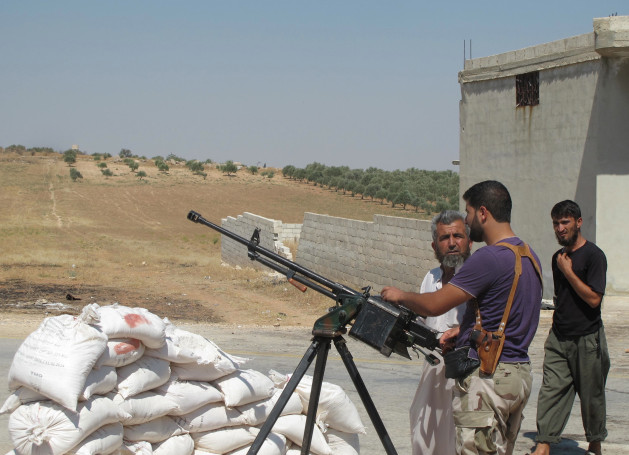 MA’ARRET AN-NU'MAN (Idlib Province, Syria), Sep 30 2013 (IPS) - The prisoner is led, handcuffed and dirty, into what until last year served as a school. “A shabiha,” said one of the anti-regime rebels in the room. “We found him two days ago at a checkpoint.”

A white board with a few Arabic words written in blue hangs on the wall behind a desk. The man is brought into the centre of the room and made to sit on the well-worn carpet. A local Free Syrian Army ‘intelligence’ officer stands behind him, together with the commander of a local division of the Suqour Al-Sham Brigade.

An FSA fighter in his mid-twenties is also present. A number of armed men stand guard outside a door leading into the former school courtyard, partially reduced to rubble after regime shelling.

‘Shabiha’ is a word long used in Syria to refer to the mafia-like militias originating in Alawite crime syndicates in the Latakia region in the early 1970s – when current President Bashar Al-Assad’s father, Hafez, became Syria’s first ever president from the minority.

An Assad loyalist captured by rebels tells IPS he was forced to rape and kill under the influence of drugs.

Long allowed to engage with impunity in smuggling, extrajudicial torture, rape and killings, the regime in turn expected the gangs of armed ‘thugs’ to serve its purposes when required. They have long been blamed for some of the worst acts of brutality perpetrated against civilians.

Since the 2011 uprising, the term has become more widely used to refer to the various paramilitary organisations known to commit massacres and spread terror with the support of the Syrian regime.

The local Suqour Al-Sham commander, Maher, a former taxi driver who before the uprising had only fired a gun during his compulsory military service and now commands some 400 men, told IPS that the detainee had confessed to multiple killings and rapes in the Hama area about 200 km north of Damascus. All of these, he claims, were carried out for intimidation purposes to get procure fuel, supplies or pharmaceuticals, or by way of indirect pressure. IPS was allowed to ask the man a number of questions.

‘Mustafa’ as he gave his name to be, said he is from a Palestinian refugee community near Hama. He said he was driven to joining an irregular militia connected with the regime out of poverty exacerbated by the war.

He said he is married, in his early thirties and has three children, for whom he “couldn’t even buy bread any more” after he was forced to close his shop.

He was given 45 days training with about 50 other Palestinian recruits and provided a salary every three months when he began going on “missions”, he said.

After one man refused to give him and the men working with him free fuel, they raped the man’s wife as an intimidation tactic, he said. This IPS correspondent could not ascertain whether this was a confession made only under pressure after capture.

He also confessed to raping a female pharmacist in Hama who refused to sell sedatives used by the militia after she found out it was a false prescription.

‘Mustafa’ said he was forced to take part in rapes and killings and had been forced to rape his brother’s wife to get her to persuade her husband to join the irregular militia. The detainee said he had threatened to tell her husband about the rape if she didn’t persuade him to join. The brother did, according to Mustafa’s account.

The FSA fighter present spat angrily at the man at this point, and left the room.

Asked by IPS what might have happened if his brother had found out, ‘Mustafa’ brushed off the question, seemingly annoyed by it. The ‘intelligence officer’ said her husband would have killed her, it would have been a question of family honour.

The detainee claimed he was not responsible for his actions because he had been under the influence of drugs given to the fighters of the irregular militia without their knowledge.

After ‘Mustafa’ is led out of the room, the local Suqour Al-Sham commander told IPS that the man would be judged by a court consisting of three judges who had defected from the regime’s justice system, assisted by two religious advisors versed in Shariah law. The court would decide, and not the FSA brigades. If sentenced to execution, he would be shot.

Justice is rudimentary in rebel-held areas. Many of the initial demands of the uprising stemmed from the notoriously corrupt justice system under the Syrian regime, and many say that to expect rebels to observe due process is unrealistic.

Some measure of justice is provided, however, by local courts, many of which are staffed at least in part by former regime judges. Four of the largest anti-regime battalions – including the large Islamist group Ahrar Al-Sham and the Suqour Al-Sham Brigade – have recently begun cooperating in the justice sector across Idlib province, Maher told IPS.

Cooperation is made difficult, however, by the fact that Ma’arrat An-Nu’man and the surrounding area is virtually cut off from the world. The Internet is inaccessible and there are no cellphone signals. Fighters speak via walkie talkies  – incidentally, according to one fighter, on the same frequency as those of the regime.

“Most of the so-called suicide bombings were actually remotely-detonated bombs,” he claims. His group had found that calling them suicide attacks was a useful tactic to get regime recruits to abandon checkpoints more easily, he said.