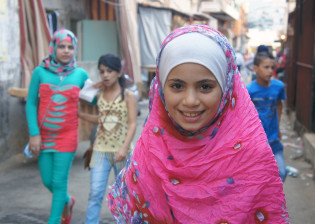 By Rebecca Murray
This week in Sana’a thousands of Yemenis – mostly youth - crowded the highway near the landmark ‘Change Square’ to celebrate the second anniversary of the revolution. Adjacent to the university, this was the site of a tented encampment that drew tens of thousands of demonstrators throughout 2011.

By Rebecca Murray
A group of Tabu fighters with mud-splattered trucks rest on the outskirts of Zweila, a small historic slave-trade stop in Libya’s southwest Sahara.

By Rebecca Murray
One year has passed since the Tawerghans fled their coastal town during Muammar Gaddafi’s violent overthrow, and displaced residents are still waiting for a chance to return.

By Rebecca Murray
On election day long lines of people from Sabha’s impoverished community of Tayuri waited to vote under the harsh Saharan sun. Four hundred miles from the Mediterranean coast, Sabha is tucked into the volatile southwest bordering Algeria, Niger and Chad.

By Rebecca Murray
On the eve of Libya’s historic elections for a General National Congress on Saturday, Jul. 7, the seaside capital’s bustling streets are lined with hundreds of campaign posters advertising electoral candidates - including those of women and youth - jockeying for a stake in their country’s future.

By Rebecca Murray
As dusk settles over the isolated Saharan town Kufra, young guards order a few hundred migrants lined up at a detention centre to chant "Libya free, Chadians out", before they kneel down for evening prayers.

Peace Lost in the Libyan Desert

By Rebecca Murray
The recent outbreak of violence between the largely segregated Zwai and Tabu tribes in Libya’s remote, Saharan town of Kufra shattered the uneasy calm that held since last February’s clashes, resulting in more than 100 deaths. The clashes illustrate the challenges in building a new state.

By Rebecca Murray
The future is uncertain for the gregarious Alhasairi family, living in a downtown apartment block battle-scarred from last year’s overthrow of the Gaddafi regime. Like countless of similar cases across Libya, the property itself is now contested, as the original owners want to return home.
Next Page »
ADVERTISEMENT ADVERTISEMENT