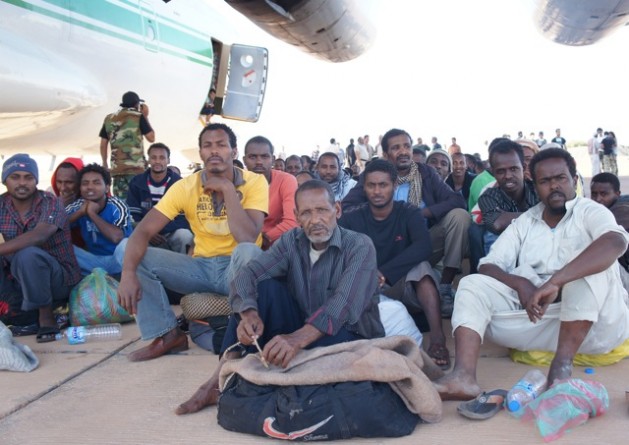 Migrants being loaded on to a cargo plane in Kufra. Credit: Rebecca Murray/IPS

KUFRA, May 13 2012 (IPS) - As dusk settles over the isolated Saharan town Kufra, young guards order a few hundred migrants lined up at a detention centre to chant “Libya free, Chadians out”, before they kneel down for evening prayers.

Most of the prisoners in the small, squalid compound called the Freedom Detention Centre – run by Kufra’s military council – are from Chad. Hundreds more, from Somalia, Eritrea and Ethiopia, were moved to bigger facilities due to overcrowding.

Almost 1,000 miles from the Mediterranean coast in Libya’s desolate southeast desert, the Kufra oasis strategically lies near the long and porous borders of Egypt, Sudan and Chad.

“The two main hubs are Kufra and Sabha in Libya,” explains Emmanuel Gignac, head of the United Nations High Commission for Refugees (UNHCR) in Libya. “All West African migrants are going through Sabha via Chad or Niger, and those originating from the Horn of Africa are going through Sudan to Kufra… then either directly to Tripoli or Benghazi. Those are roughly the routes.”

Despite the most recent outbreak of deadly violence between Kufra’s Zwai and Tabu tribes, migrants continue to arrive at this lucrative smuggling point for people, weapons, drugs and fuel. Both tribes are said to have benefited from the trade.

Bernham is a thin, 35-year old Eritrean, held in a small, crowded room near the Kufra compound’s entrance. Guards tell IPS that other migrants have identified him as a human smuggler who took their money. Bernham vehemently denies the charges.

“These men have been victims of traffickers and travel by foot in the desert,” explains Abdul Rahim Ab Wazzah, a senior guard, pointing to the crowd of praying migrants.

“Bernham is part of a network of connections coming from Sudan. He takes money from men who want to go from Sudan to Kufra, and then to Tripoli. Each leg costs 400 dollars,” Ab Wazzah says. “His job was to collect Somalis, and ultimately receive money for their boat ride to Europe.”

“Kufra is safer than Benghazi,” volunteers Moussa Habib Mohammed, 30, a Chadian prisoner who shares a tiny, dank room with up to 15 other men. One month ago he was caught in the coastal city without a passport, and sent back to Kufra.

Since the uprising, many dark-skinned Africans are suspected of having been mercenary fighters for Gaddafi during last year’s conflict. They are at risk for imprisonment by Libyan militias and, according to watchdogs like Human Rights Watch, torture.

In Kufra however, the conflict is uniquely local. Members of the predominant Arab Zwai tribe accuse many of the marginalised, dark-skinned Tabu – who joined the uprising against Gaddafi – of being from Chad and intent on establishing a regional homeland and resource monopoly.

Exacerbating the issue is Gaddafi’s confiscation of Libyan Identity cards from Tabu citizens in Kufra four years ago. Semi-nomadic Tabu tribes are from Libya, Chad, Niger and Sudan. With no papers, Libyan members of the Tabu tribe are in danger of being caught up in the mass arrests of undocumented foreigners.

In a scathing 2009 report by Human Rights Watch, ‘Pushed Back, Pushed Around’, sub-Saharan migrants interviewed in Malta and Italy most frequently cited Kufra as a place of detention in Libya – during entry or deportation.

The report states that most migrants were convinced that the police and smugglers worked together. Migrants who were being deported “would be released from Kufra prison – often directly into the hands of smugglers who would take them into custody, demand more money from their families, and take them once again to the cities along the coast.”

“All fear being dumped in the desert,” the report says.

Fred Abrahams, a Human Rights Watch advisor, told IPS: “The government is overwhelmed and incapable of dealing with the migrant flow…The government doesn’t have control of its borders and the detention system. In this chaotic post-conflict environment, militias and armed groups are filling the void.

“Some militias are doing the right thing,” he says. “Others have been very problematic, with reported cases of abuse and forced labour. There are worrying trends of hiring out migrant detainees to local businesses and farmers. Generally the migrants get paid but in some cases they have not been, which is happening increasingly.

Al Sanussi Bashir Attwati of Kufra’s Red Crescent Society provides food and first aid to the detention centre. He says the government is building a larger facility for migrants seven miles north of Kufra in the desert, instead of flying them to the coast.

“Three weeks ago, 25 men walked here barefoot through the desert and their feet were lacerated. We provided them treatment and shoes, and transferred them to Benghazi,” Attwati says.

Under the mid-day sun, hundreds of mostly Somalis, Eritreans and Ethiopian males sit on the tarmac of Kufra’s airport runway, about to enter an army cargo plane bound north to Benghazi and the Ghanfouda detention centre. The military in charge did not inform the migrants where they were headed.

Suel Abdullah, 20, from Mogadishu, surrounded by friends near the airplane, shares a common story. “Al Shabaab wanted to kill us and we lived in fear in Somalia,” he says.

On his trek north, Abdullah was imprisoned for brief periods in decrepit Ethiopian and Sudanese jails. “Then our trafficker took us from Sudan to Libya, and dumped us in the desert. We were captured by men who said they were Libyan forces, but they were really from Chad,” he says.

“There were 800 of us, and they packed us in like animals and asked for 700 dollars each. Finally, the Libyan army came and there was a gunfight. We were brought to Kufra.”

Libya is variously a destination and transit hub to Europe for migrants. The International Organisation for Migration (IOM) records up to one million migrants in Libya before the Gaddafi regime fell, while the United Nations Refugee Agency (UNHCR) documents 50,000 migrants attempting the sea crossing last year.

Jeremy Haslam, IOM head in Libya says a big challenge is for relevant embassies – if present in Libya – to prove a migrant’s citizenship and produce temporary papers to return them home.

“Although Libya is host to some refugees, the country is not signatory to the 1951 Refugee Convention and does not currently process asylum cases,” says Haslam. “Thus the numbers continue to grow and detention sites are reaching bursting point.” (END)