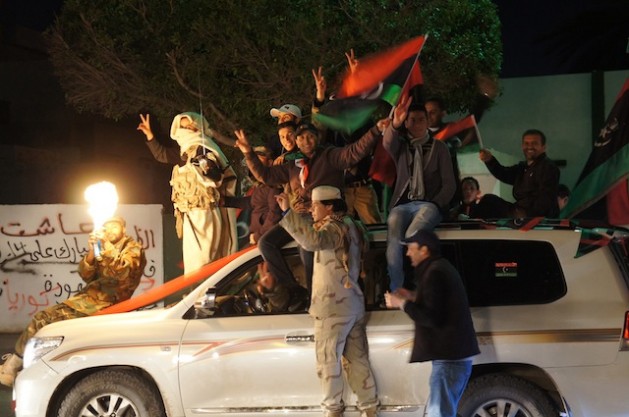 The quiet assembly was in stark contrast to the euphoric Feb. 17 rally on the same spot marking the one-year anniversary of the uprising against the Gaddafi regime. Then thousands of Libyans – some holding framed pictures of ‘martyred’ loved ones – thronged the downtown sidewalks and expressed optimism for a future of democracy, prosperity and peace.

That optimism has been replaced by anxiety. The killing of U.S. ambassador Christopher Stevens in Benghazi has highlighted the dangers posed by a proliferation of armed groups since the revolution. Many are part of the loose-knit, undertrained government auxiliary forces that seem to act with impunity throughout Libya, and fuel the anxious public perception that the government is too weak to rein them in.

The government’s call for citizens to voluntarily hand in their weapons is now pushed back to the end of September because of security concerns. Prime Minister Mustafa Abu Shugar has proposed giving cash for weapons.

The SSC, like the Ministry of Defence’s affiliated Shield of Libya brigades, is a collection of armed groups operating across Libya under the interior ministry’s loose control.

“A lot of people came to hand in their weapons,” says Tajari. “We told them to bring them back on the 29th. After that, citizens will be forbidden to carry them.”

Human rights lawyer Salah Marghani, commended by Human Rights Watch for his advocacy work with detainees under the Gaddafi regime, is outraged by the buy-back weapons scheme. “It will create a lucrative trade of arms for profit and won’t take many arms off the street,” he says. “What we need to get rid of is the heavy weapons.”

Marghani divides Libya’s armed groups operating in the government security vacuum into five categories. He explains that three are “easy to deal with”: former revolutionary fighters who believe their sole duty is to protect citizens and will voluntarily disarm; those who guard national interests motivated by a mix of doing public good and making profit; and those who benefit exclusively from small economic kickbacks.

“The remaining two categories are the dangerous ones,” says Marghani. These are ex-convicts who commit violent crimes, including armed robbery and drug dealing, or groups of “phantom-like” fighters that operate under a banner of Gaddafi loyalists or Islamist extremism.

In light of the Benghazi attack, he describes Libyans as feeling a collective ‘shame’. “They are scared right now,” he adds. “They don’t want their country to be another Somalia with warlords.”

“Once the lid was removed, there was every reason to fear a free-for-all, as the myriad of armed groups that proliferated during the rebellion sought material advantage, political influence or, more simply, revenge,” says the report. “This was all the more so given the security vacuum produced by the regime’s precipitous fall.”

Bill Lawrence, ICG’s North Africa analyst, in an interview with IPS says that Salafist leaders he has met blame rogue elements for the Benghazi attack. “Salafists who are in general skeptical of the political transition in Libya in some cases – not in every case – are definitely disassociating themselves from this act of violence, and condemning both the assassination and the film (on Islam that is leading to worldwide protests in Muslim countries).”

Some Libyans voice concerns that the U.S. drones, intelligence and military personnel in Libyan territory since the ambassador’s death might be here to stay.

Sami Khaskusha, professor of international relations, is a driving force on Tripoli University campus. An active member of the civil resistance against Gaddafi, he energetically organised a wide range of civil society discussions after the capital’s liberation under an ambitious banner: ‘Tripoli University’s programme for rebuilding Libya’.

“Suddenly we turned the university into a huge workshop,” Khaskusha remembers. “There was a lot of euphoria and enthusiasm then.”

But he says the mood changed and activities were curtailed when the transitional government’s more traditional, conservative mindset inherited power at the ministries.

“At that same time every thug took over offices and declared himself to be a military brigade. They submitted lists to the defence and interior ministries and demanded money and cars, and extorted businesses,” Khaskusha says.

“The Ministry of Interior is now run by the militia rather than the opposite. The ministry gave armed groups the legitimacy to arrest, interrogate, and secure banks, government offices and embassies in the absence of state power.”

An escalation of crime with impunity, tribal clashes and intolerant attacks against religious sites and non-governmental organisations are contributing to an atmosphere of instability and fear.

Salah Marghani is working against this. In light of torture in detention centres documented by Amnesty International and Human Rights Watch, he educates armed groups – including former prisoners now supervising jails – to adhere to human rights protocols.

“In one incident, I asked a military brigade if they torture inmates. One man said: ‘No we don’t, we only do ‘falaqa’ (beating prisoners’ feet). What struck me was he didn’t comprehend this is wrong,” sighs Marghani.

“I think it will take ten to 15 years for people to understand the role of democracy and civil society,” Khaskusha says. “We need to practise a peaceful struggle of ideas, culture of tolerance and acceptance of ‘the other’. Now when we disagree, we run to our weapons.”