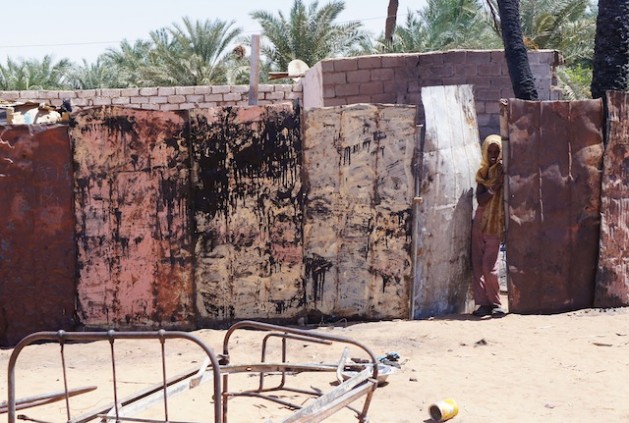 KUFRA, southern Libya, Oct 20 2012 (IPS) - Safia’s six-year-old body is riddled with scars from the rocket that hit her home in February. With her immediate family all killed in the violent attack, this sole survivor smiles shyly as she visits the medics that fought to save her life.

Their makeshift clinic is in Kufra’s impoverished and war-torn Gadarfai neighbourhood, a segregated stretch of flimsy dwellings, piles of rubbish and scorched earth occupied by the indigenous Tabu tribe.

Spent ordnance and a gaping hole left by a mortar round in the clinic’s compound is a reminder of the recent brutal clashes between the Tabu and the town’s majority Arab tribe, the Zwai, over local power sharing and lucrative cross-border smuggling routes.

As fighting got under way, Tabu medical staff at Kufra’s downtown government hospital were threatened.

“I worked there for ten years as a nurse,” says Khadija Hamed Yousef. “The Zwai security guard and ambulance driver came in with Kalashnikovs and warned: ‘This is your last day or we will shoot you’.”

Since the July ceasefire, the Tabu clinics in Gadarfai and Shura are still overcrowded, and lack equipment and medicine. Two North Korean doctors recently assigned to the facilities by the Ministry of Health speak only their native language.

Fearful pregnant Tabu women bring Zwai acquaintances to Kufra’s hospital during childbirth to ensure their safety, and Tabu with serious injuries or illnesses now travel outside for care.

While Kufra’s Zwai tribe benefited from Gaddafi’s favouritism, the semi-nomadic Tabu were deprived of citizenship and ID cards, accused of being ‘foreign’ despite generations born on Libyan soil. They faced state-sanctioned discrimination in jobs, education and housing.

Local roles during the revolution against the Gaddafi reflected this pecking order: the Zwai largely backed the status quo while the Tabu – whose networks stretch west to Sebha, and south into Chad, Niger and Sudan – joined the rebellion to fight for their rights.

Once the revolution was won, Kufra’s tribal-driven conflict over the spoils was ignited last November at a desert checkpoint.

A weak response from the Tripoli-based government and international community did little to quell a raging battle in February, which broke out again in April and June.

Almost 200 were killed, the majority Tabu, with hundreds more injured before the ceasefire took hold.

While the Tebu move freely across the area’s desert, the Zwai control Kufra’s local government, downtown commercial zone and the airport. During the clashes the Zwai held sway over who entered the town, including humanitarian aid.

The defence ministry’s decision in March to assign as peacekeepers the Shield of Libya – a loose-knit collection of ill-disciplined militias from the northeast – disastrously backfired.

Biased towards Zwai claims that Kufra was under attack from Tabu ‘outsiders’, the fighters soon aimed their weapons at the Tabu in besieged Gadarfai and Shura communities.

Halim Abdullah Mohammed, 26, was a core staff member working a 24-hour shift throughout the February clashes at the Gadarfai clinic, sandwiched between two Zwai checkpoints and often under direct fire.

They received over 200 patients then, half of whom are recorded as women and children.

She admits her first aid training was hopelessly inadequate for the patients they received. There was the 12-year old girl whose head was partially blown off by a mortar and died, and the 29-year-old man with a bullet in his head that they managed to save.

With electricity cuts there was no water, no refrigeration, and little medication. They operated with flashlights, using dirty well water and direct blood transfusions.

Unable to bury the dead for fear of being shot themselves, the medical staff stacked bodies in the compound’s guardroom. They decomposed in the desert heat.

Across town, in Shura neighbourhood, Rajab Hamid Suri quietly sobs as he recounts the death of his 16-year old son Mohammed. Hit by a mortar targeting their home, he bled to death slowly at Shura’s makeshift clinic next door. “He was talking. We didn’t expect him to die,” he says.

Tabu medical staff underscore the lack of aid they received under siege, and describe how they were forced to ferry some seriously wounded across the desert hundreds of miles west to Murzuq for treatment.

They say they received no support from the local Red Crescent Society, and that the Tripoli-based International Committee for the Red Cross (ICRC) conducted medical evacuations only.

In April, Amnesty International released an urgent statement appealing for humanitarian access. “We also asked that individuals should not be denied health care based on their identity, and should be protected when seeking care in the Kufra hospital,” says Libya researcher Diana Eltahawy.

Laurent Perrelet, an ICRC protection delegate, was in Kufra in June during an evacuation of wounded. “It was most dangerous transporting Tabu from the clinics to the airport in vehicles,” he describes.

“What was striking were the clinics. There were a lot of wounded and not enough space to accommodate them. They were outside the clinic – within the compounds, but outside.”

Perrelet believes training Tabu and Zwai Red Crescent volunteers should be a primary focus, as well as figuring out “how we can work together in Kufra, and with the Red Crescent.”

Halima Salah, an energetic 28-year old nurse, juggles her intensive schedule at the Shura clinic with caring for a son with cerebral palsy, and her civil society organisation that promotes dialogue between Tabu and Zwai.

“I still talk with one of my close Zwai friends,” she says. “During the clashes we couldn’t because it involved families. But now we do and we ask each other: ‘Why are you sending mortars instead of tomatoes?’”