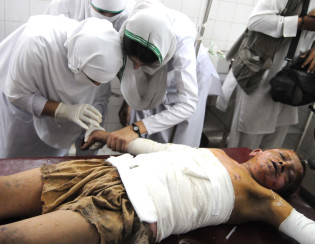 By Esmatullah Mayar
Efforts to clear Afghanistan of landmines have been painfully slow. At least 45 people on average lose their limbs every month to deadly anti-personnel mines, according to the Mine Action Coordination Centre of Afghanistan, formerly a project of the UN Mine Action Service, and now a national entity.

By Rebecca Murray
Safia’s six-year-old body is riddled with scars from the rocket that hit her home in February. With her immediate family all killed in the violent attack, this sole survivor smiles shyly as she visits the medics that fought to save her life.
ADVERTISEMENT ADVERTISEMENT