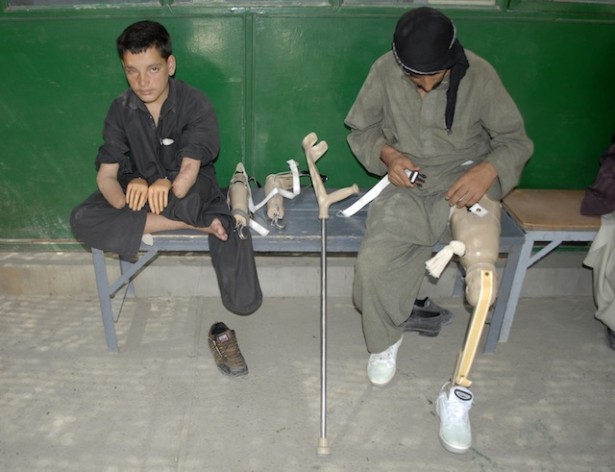 At an artificial limbs centre in Kabul. Credit: Najibullah Musafer/Killid/IPS.

KABUL, Mar 7 2013 (IPS) - Efforts to clear Afghanistan of landmines have been painfully slow. At least 45 people on average lose their limbs every month to deadly anti-personnel mines, according to the Mine Action Coordination Centre of Afghanistan, formerly a project of the UN Mine Action Service, and now a national entity.

Under the UN’s mine ban treaty, Afghanistan should have been free of landmines by the end of 2013. The country was granted until 2023 to clear all mined areas in Geneva in December last year.

Since 1997, the International Campaign to Ban Landmines, a global network of non-governmental organisations, has been campaigning to make the world free of landmines and cluster ammunition. It has a presence in 90 countries including Afghanistan.

A signatory to the UN Anti-Personnel Mine Ban Convention, or the Ottawa Convention as it is called, Afghanistan is littered with anti-personnel mines that are built to maim.

Demining activities were started in 1979. The work, which is extremely time-consuming, has meant that a million Afghans in an estimated population of 30 million still live in areas with unexploded ordinances.

At the prosthetic centre of the International Committee of the Red Cross (ICRC) in Kabul, 36-year-old Ghulam Siddiq of Khogiani district in Nangarhar province 200 km east of Kabul has come for an artificial leg. “I was cutting some grass in the mountain in the early evening when suddenly an explosion occurred,” he told Killid/IPS.

He said he could not believe he had lost a leg. “When I recovered consciousness I found myself in the hospital. My leg was cut below my knee. It was painful for me. I began to remonstrate with God: one side is poverty and the other side I have trouble with my leg. Then I kept my patience. This might be the will of God.”

Baz Mohammad is a 40-year-old resident of Shakardara district of Kabul who has also come to the ICRC centre to get artificial limbs. The ICRC has limb-fitting centres in Kabul, Herat, Mazar-e-Sharif, Gulbahar, Faizabad and Jalalabad.

He said he lost both legs in a landmine accident. “When I was loading wheat I stepped on a mine. I did not know what happened.”

There appears to be a lack of understanding among people about the slow pace of mine clearing work. There are also complaints that mine clearance is being undertaken in areas where mines do not exist. The areas that are being surveyed for mines are free of mines, some people say.

Dr Mohammad Dayem Kakar, head of the Afghan National Disaster Management Authority (ANDMA), addressed a meeting in Herat in December, before the start of demining operations in parts of Herat’s Karokh, Obi and Chesht Sahrif districts. He said mines were spread over 599 sq km.

“An estimated 3,000 people were killed or injured by mines and unexploded materials each month three years back,” he said. “But now the figure has decreased to 45 people each month.”

Kakar hoped that the contaminated areas in Herat would be cleared by 2018 and the whole country demined by 2023. Kakar praised the perilous work undertaken by demining organisations. “The mine is a danger for human beings, and our duty is to identify the areas and clear it.”

Mines were laid by the communist regime of Dr Najibullah, during the fighting with U.S.-supported mujahideen groups. Further mine-laying took place between 1996 and 2001 during the conflict between the Taliban government and the Northern Alliance led by Ahmad Shah Massoud. Landmines were planted also in residential areas and agricultural land, making Afghanistan one of the most mined countries in the world.

Farid Humayun, head of The HALO Trust, said 54 sq km were cleared over five years in three districts in Herat where the demining charity works. Another 12 districts, including the border districts of Ghorian, Kuhsan, Shindand and Adraskan in Herat will also be cleared, according to the plan. Halo is a demining charity based in Britain, and is the oldest and largest group engaged in demining work.

The HALO Trust, according to its website, has 200 mine clearance teams working in Herat and nine provinces of the northern and central regions. Between 1988 and May 2010, HALO destroyed more than 736,000 mines (195,000 emplaced mines and 541,000 stockpiled mines), 10 million items of large calibre ammunition and 45.6 million bullets.

At the Herat meeting in December, HALO’s director Humayun said their teams do not touch the new roadside bombs, the Improvised Explosive Devices (IEDs), placed by armed opponents of the Hamid Karzai government. These were the cause of 30 percent of civilian fatalities in the second half of 2012, according to the UN. A reported 967 people were killed and 1,590 injured.

Shahab Hakimi, head of the Mine Detection and Dog Centre (MDC), which trains dogs to do the dangerous work, urged donors to continue funding for the humanitarian mine-clearance efforts. He was hopeful the landmines littering the country could be cleared with continued funding and the efforts of non-governmental demining organisations.

Afghanistan will be able to meet its 2023 deadline, said Abigail Hartley, programme manager of the UN Mine Action Services.